Introduction: Catheter ablation has been shown to be safe and effective in reducing atrial fibrillation (AF) burden and symptoms. However, there is limited long term data using continuous monitoring to assess the actual success of catheter ablation. This study assessed the long-term outcome of AF ablation in patients with implantable cardiac devices allowing beat-to-beat analysis of arrhythmia outcomes.

Conclusion: Ablation results in significant reductions in AF burden both acutely and over the long term when assessed using continuous device derived beat-to-beat monitoring. When second ablation was required the point-by-point technique was associated with greater reductions in AF burden than “single shot” technologies. In persistent AF, burden increased two years after ablation to near pre ablation levels by year 4 suggesting a different mechanism from PAF patients where this increase was not demonstrated. 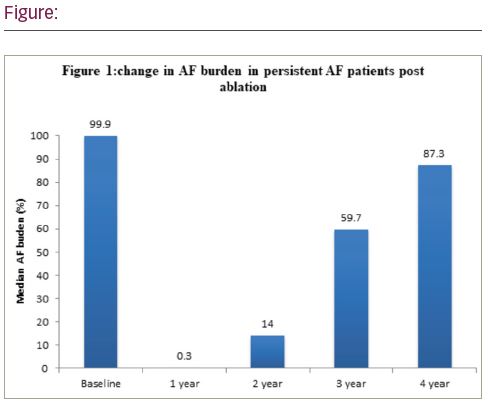