Introduction: Pulsed field ablation (PFA) is a novel, non-thermal, atrial fibrillation (AF) ablation technique, in which delivery of millisecond electrical pulses generates pores in cell membranes, leading to its disruption (electroporation). PFA has demonstrated high selectivity for cardiomyocytes, thus reducing the risk of collateral extracardiac tissue damage often associated with thermal ablation methods. Both preclinical and clinical studies have indicated that PFA has promising advantages over existing techniques in terms of safety profile and enhanced lesion durability, although long and very-long term data are still lacking. We report on the procedural safety and acute effectiveness of the first PFA cases performed in the UK.

Methods: This was a prospective registry study including patients with AF who were eligible for ablation according to the European Society of Cardiology AF (2020) guidelines. A pre-procedural chest computed tomography scan was performed, to evaluate pulmonary vein (PV) anatomy and exclude intracardiac thrombus. All procedures were carried out under general anaesthesia, with patients omitting a single dose of their direct oral anticoagulants prior to the intervention. Heparin was administered to maintain an activated clotting time of >300 ms. The FARAPULSE® system (Boston Scientific, Massachusetts, USA) was used to perform PFA. Following a single transseptal puncture to access the left atrium, a single-shot multielectrode PFA catheter (Farawave®, Boston Scientific) was advanced over a guidewire, through a 13-Fr steerable sheath (Faradrive®, Boston Scientific). The catheter is composed of 5 splines, each containing 4 electrodes, and is rotated between applications, to ensure full circumferential PV ostial and antral coverage. Ablation is delivered in both ‘flower’ (Figure A1) and ‘basket’ (Figure A2) configurations, with a biphasic waveform output of 2000 V. Acute isolation of the treated vein was determined by the mapping electrodes on each spline of the PFA catheter. Electroanatomical 3D maps were also created using the Rhythmia® mapping system (Boston Scientific), both before and after ablation.

Results: Patient and procedure characteristics are detailed in the table (Figure B). In this series of treated patients, PFA successfully isolated all PVs, without any complications during the procedure and hospital admission. Vein isolation was confirmed both with electrogram and electroanatomical voltage mapping (Figure C, pre [left] and post [right] ablation). As per protocol, each vein was isolated with 8 applications, with the exception of the right inferior pulmonary vein in the first patient, which required 11 applications due to acute angulation of the vein with respect to the transeptal puncture. The mean procedure time was 102 ± 23 minutes, which reduced significantly with each case, indicating a steep learning curve, which improved on both radiofrequency and cryoballoon ablation times.

Conclusions: This initial series of AF patients treated with PFA – the first performed in the UK – highlights the acute safety and effectiveness of this system. Despite missing long-term outcomes, this new technical approach shows potential in further reducing the risk of complications, while providing durable lesions and reducing procedure times. Further data will be prospectively gathered to provide statistically relevant results. ❑ 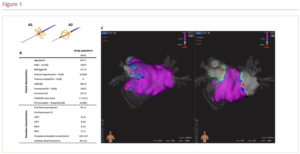