Introduction: Radiofrequency catheter ablation therapy for atrial fibrillation (AF) patients ranges from pulmonary vein isolation (PVI) to more extensive ablation strategies consisting of PVI together with multiple additional lesions. AF patients represent a diverse population requiring a range of different treatment approaches; no single approach is right for all patients, with many patients responding to PVI alone. Identifying these patients is a significant clinical challenge because it is difficult to determine the mechanisms sustaining AF in a specific patient. Virtual patient cohorts allow mechanistic investigation into the individual contribution of the anatomical, electrical and structural substrate to AF ablation. We aimed to construct and utilize a virtual cohort to investigate the effects of anatomy and fibrosis on AF and to predict PVI
ablation response.

Methods: Cardiac contrast enhanced magnetic resonance angiogram and late-gadolinium enhancement magnetic resonance imaging (LGE-MRI) data for the left atria of 100 AF patients allowed us to create virtual models. Bifurcations in pulmonary veins (PVs) and the region over the mitral valve were clipped or removed. All the PVs were labelled along with the left atrial appendage. Epicardial and endocardial fibres from a human atrial ex-vivo DTMRI atlas were added to each of the virtual atria through the universal atrial coordinate system.  The effects of fibrotic remodelling were included as changes in conduction velocity and ionic properties based on the LGE-MRI intensity distribution. Simulations were then run through the Cardiac Arrythmia Research Package simulator through pre-assigned initial start points. PVI outcome was classified as responder where there is a termination of AF or macro-re-entry, or non-responder where the AF continues. Figure 1 shows the construction of the virtual cohort and simulation of ablation.

Results: PVI outcome was 18% termination, 35% macroreentry (either around the junction of the left atrial body with the PV or a single spiral re-entry), and 47% AF (non-responders with multiple spiral re-entries). LA area was significantly smaller in the responder group than non-responder group (99cm2 vs 117cm2, p=0.003). Neither the total fibrosis burden (10.4cm2 vs 7.7cm2, p=0.1) nor the AF cycle length (206ms vs 206ms, p=0.26) was significantly different in the groups. The number of electrical driver sites in the PVs compared to the entire LA was higher in the responder group (0.34 vs 0.23, p=0.004).

Conclusion: LA surface area and pulmonary vein driver density are significantly higher in responder groups, meaning they are predictive of PVI success. This means smaller left atria and those with driver sites largely in the PVs are more likely to be treated successfully with PVI ablation. Total fibrosis burden and AF cycle length do not affect the success of PVI in AF patients. 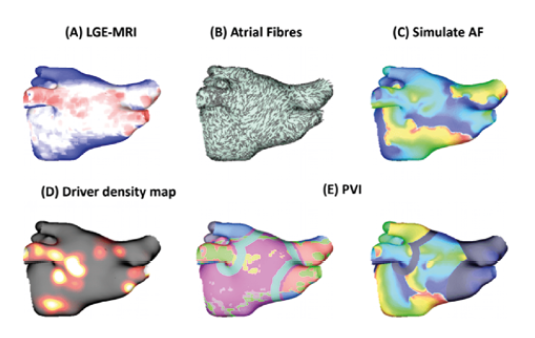