Introduction: The left atrial ganglionated plexus (GP) are implicated in atrial fibrillation (AF) and can be located by high frequency endocardial stimulation (HFS). In order to understand the role of GP in AF pathogenesis, we report reproducible electrophysiological phenomena seen during GP stimulation and ablation.

Methods: Ninety-five patients with paroxysmal AF with or without previous pulmonary vein isolation were studied. All had detailed global left atrial high frequency stimulation (HFS) mapping around the left atrium with a 3.5 mm tip ablation catheter to identify GPs. 20-pole PV catheter was inserted into the nearest pulmonary vein (PV) to where HFS was being tested. CARTOTM was used to create 3D electroanatomic map of the left atrium and HFS tested sites were tagged according to their response. HFS causing ectopy/atrial tachycardia/AF were tagged ’ectopy-triggering GP’ (ET-GP). Patients in sinus rhythm were paced at a fixed rate and HFS delivered within the local atrial refractory period (10 V, 40 Hz, 80 ms, 20 ms delay from pacing stimulus) to identify ET-GP. If in AF, continuous HFS was performed (10 V, 20 Hz continuously for up to 10 s) to identify atrioventricular-dissociating GP (AVD-GP) which was defined as average RR prolongation of >50% during HFS from the baseline RR interval. GPs were ablated and re-tested with HFS to confirm loss of effect.

Results: We observed interesting electrophysiological phenomena during mapping and ablation of GPs: 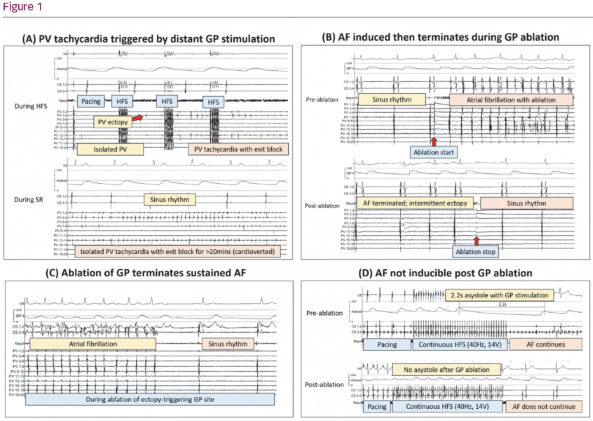 1. Triggering PV tachycardia in isolated veins; 4/41 patients (10%) with previous PV isolation (PVI) had GPs identified in the atria that triggered rapid PV tachycardia with exit block with HFS. One patient had PV tachycardia for >20 mins, whilst the remaining atrium continued in slow SR (Figure 1A).

5. Preventing AF recurrence with GP ablation; in one remarkable case, a single GP site was ablated for only 197 secs at the left inferior pulmonary vein ostium in the posterior wall. RF application immediately caused AF. PVs were left electrically connected. The patient has been symptom free and not required repeat ablation for over 4 years.

6. GP activity can recur after ablation; 9 patients with previous GP ablations returned for repeat ablations with symptomatic AF recurrence. At previously ablated GP sites, we re-mapped with HFS to see if any GP recovery. One patient had no recovery of GPs and 8 remaining patients had on average 67% ± 58 of GPs recovered at re-test.

Conclusion: These observations resulting from stimulation and ablation of GP sites identified by HFS, provide further evidence of the importance of the intrinsic cardiac autonomic nervous system in AF pathogenesis.