Background: Catheter ablation is an important adjunct to device implantation for secondary prevention of ventricular tachycardia (VT). However, several factors may influence the success of ablations in terms of long-term freedom from VT recurrence. A thus far little examined factor is the use of general anaesthetic (GA) versus conscious sedation during the procedure, which has been shown to improve outcomes in persistent atrial fibrillation (AF) ablation.
Methods: Patients with structural heart disease VT undergoing ablations from January 2015 to March 2019 were retrospectively followed up at a single centre. End points were recurrent VT or device therapy (shock or anti-tachycardia pacing) at one year. Hazard ratios (HR) were generated using a multivariate Cox-regression proportional hazards model including variables of age at ablation, sex, amiodarone use at time of ablation, scar age, left ventricular ejection fraction, use of GA, and diagnosis of: diabetes mellitus (DM), hypertension (HTN), renal impairment or AF.
Results: 79 patients (74 male, mean age 68.2 ± 10.3 years) were included. A substrate-based strategy of late potential ablation was employed. Sixty-nine had ischaemic and 10 had non-ischaemic cardiomyopathy. Mean scar age was 13.8 ± 9.8 years; EF was 40–50% in 27 patients, 30–40% in 26 and <30% in 26. Thirty-seven patients had implantable cardioverter defibrillators and 30 had cardiac resynchronisation therapy (CRT) defibrillator devices, one had a CRT-pacemaker device and four had dual chamber pacemakers. Comorbidities were: DM (16), HTN (31), renal impairment (13), AF (31). 62 patients (79.5%) were on amiodarone at the time of ablation. Mean procedure duration was 234.8 ± 44.5 min and mean radiofrequency energy application time was 2,247 ± 862 s.
Sixty-one were first procedures and 18 were repeat procedures. One patient suffered a complication of groin haematoma. Sixty-two patients (78.5%) underwent VT ablation under GA and 17 (21.5%) under sedation of midazolam and fentanyl. Patient characteristics did not differ between groups. Significant factors which increased freedom from VT recurrence or device therapy were HTN (88.9% versus 59.4%, HR 0.72, 95% confidence interval (CI): 0.007–0.75, p=0.028), amiodarone treatment (50.0% versus 76.3%, HR 0.036, 95% CI: 0.003–0.404, p=0.036) and ablation under GA rather than sedation (50.0% versus 75.0%, HR 0.055, 95% CI: 0.006–0.495, p=0.01) (Figure 1).
Conclusions: In patients with structural heart disease undergoing VT ablation, outcomes are improved with the use of GA over conscious sedation. 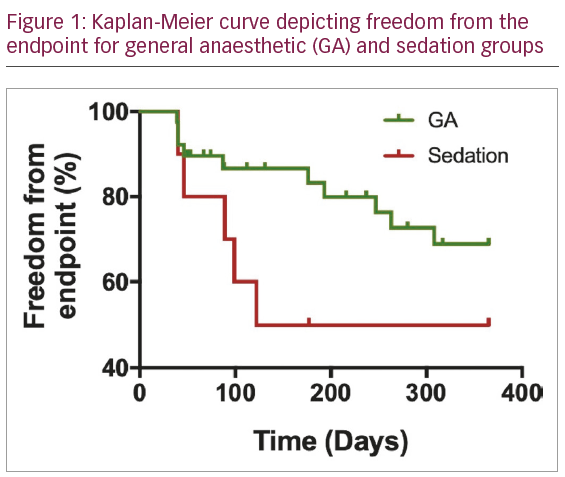 Spontaneously recanalized coronary thrombus (SRCT), informally known as Swiss-cheese, honeycomb, lotus root or spiderweb lesion, is an increasingly recognised pathology in patients undergoing coronary angiography. Most patients with SRCT present with angina or angina equivalent.1 We describe a case of SRCT in a patient who presented with ventricular tachycardia (VT) without a previous history of ischaemic […]

Drug reaction with eosinophilia and systemic symptoms (DRESS) syndrome is a severe cutaneous adverse drug reaction. Symptoms comprise fever, lymphadenopathy, rash, and eosinophilia, with or without visceral organ involvement. The extent of internal organ involvement, including hepatitis, myocarditis, pneumonitis, thyroiditis, and pancreatitis, determines the morbidity and mortality associated with the disease.1–3 We report a case of […]