Introduction: Several clinical risk scores have been developed from specific population cohorts to predict the likelihood of atrial fibrillation (AF) occurrence for individuals. However, these risk scores often underperform when applied to an external validation cohort. These risk scores have never been compared head-to-head in a UK population. Previous observational cohort studies have also suggested that there is lower prevalence and incidence of AF in non-white ethnic groups and female individuals. Our aim was to evaluate the relative performance of 5 risk scores on the UK Biobank population in their ability to predict future AF and explore differences in AF risk based on ethnicity and sex.

Methods: We studied participants (n=495,972) from the UK Biobank (longitudinal cohort study). Participants were excluded if they had a previous history of AF at time of enrolment into the study or developed AF within a month of enrolment. Median age was 58 years and the median follow-up was 12.7 years. Established AF risk scores, C2HEST, CHA2DS2VASC, HATCH, Taiwan AF and CHARGE-AF were calculated based on International Classification of Disease ICD-10 diagnoses for each participant. The area under the receiver operating characteristic curve (AUROC) was calculated for each risk score to predict AF at 1 year, 2 years, 5 years, 10 years and at complete follow-up. Categorical variables were reported based on ethnicity and sex. Participants with unknown ethnicity were excluded. Survival curves for AF event-free survival were plotted to compare ethnic and sex differences.

Results: Table 1 shows the AUROC scores for AF prediction for all the risk scores at 1 year, 2 years, 5 years, 10 years and at complete follow-up. The risk scores with the highest AUROC scores for AF prediction were CHARGE-AF and Taiwan AF risk scores. The highest AUROC scores were found for 5-year AF risk prediction for both CHARGE-AF (AUROC 0.760) and Taiwan AF (AUROC 0.747). C2HEST, CHA2DS2VASC and HATCH consistently had AUROC scores less than 0.6 and, therefore, performed poorly at predicting AF risk. Overall, 6.2% (27,264/439,118) of white participants developed AF during their follow-up compared with 2.8% (743/26,109) of non-white participants. Furthermore, 8.4% (17,355/205,650) of male participants developed AF during their follow-up compared with 4.1% (10,652/259,577) of female participants. Survival curves of AF event-free survival between white and non-white participants (p<0.001) and between male and female participants (p<0.001) using log rank statistic was statistically significant. Figure 1 shows the survival curves.

Conclusions: CHARGE-AF and Taiwan AF risk scores were the best performing 5-year AF risk prediction scores and most suited to the UK population compared with C2HEST, CHA2DS2VASC and HATCH. The risk of AF events was lower in non-white ethnic groups and female individuals. The reasons for the difference in AF incidence between ethnic groups and between males and females should be further explored. 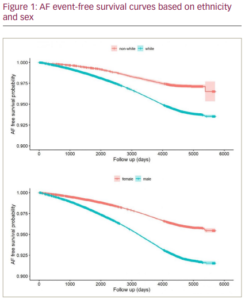