Introduction: Cardiac resynchronisation therapy (CRT) has become a widely used pacing technique in the treatment of heart failure. Optimisation of AV and VV delays to maximise therapeutic benefit has proven difficult and is therefore often not performed. The haemodynamics vary considerably after changes in pacing parameters and there are conflicting results as to when is the best time to measure the acute response, particularly using non-invasive blood pressure (NIBP) systems.

Method: A purpose-written computer simulation program was used, which was based on a set of equations with time-varying elastances to describe atrial and ventricular function, along with Windkessel (resistance and capacitance) equations to describe blood flow around the systemic and pulmonary circulations. Baroreflex and cardiopulmonary reflexes were described by time-delay equations, which affect contractility, arterial resistance and venous compliance. Simulations were calculated to describe pressure and flow after changes in contractility for varying time periods, representing the typical CRT optimisation session.

Results: Sudden changes in contractility, representing a step change in CRT programming, result in a relatively large increase in NIBP, which then settles to a plateau level, finally stabilising after 15–20 seconds. This stabilisation is mainly due to baroreflex-mediated changes in peripheral resistance and to a lesser extent contractility. Changes in venous compliance generally take 30–40 seconds to manifest and appear to be minor. The traces appear very similar to those reported previously in clinical studies.

Conclusions: The implications for optimisation are that the NIBP changes are largest over the first 5 beats, which give a good signal-to-noise for detecting an effect. Pressures and flows then take 15 seconds to stabilise to a true plateau for measurements aimed at longer time periods. The relationship between the initial NIBP change and the plateau is complex and depends on factors such as the baroreflex gain, underlying level of contractility and degree of resting sympathetic tone. Averaging multiple recordings with different combinations of parameters should therefore allow at least 20 seconds in each state to ensure stable cardiac haemodynamics. ❑ 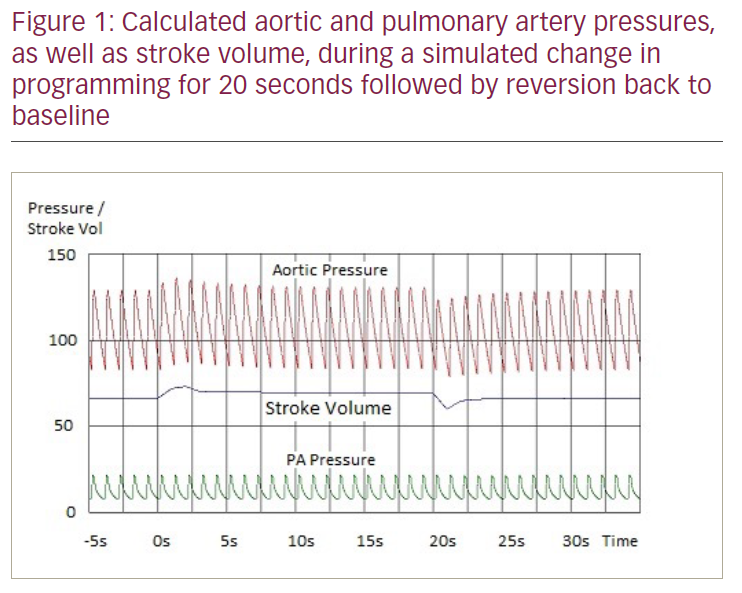