Methods: We identified patients over 90 years of age who underwent initial pacemaker implantation between September 2017 and December 2021 at East Sussex Healthcare NHS Trust. All notes were retrospectively reviewed. The primary clinical endpoint was total mortality. The secondary endpoints included procedural characteristics and safety.

Results: A total of 100 patients were included. The average age was 93.50 ± 2.43. 57% of patients were female. Patients were followed up for an average of 611.58 ± 413.60 days. Overall, 82% of the implants were performed as an inpatient emergency; 69% of implants were due to AV nodal block, 19% due to sinus node dysfunction and 12% of implants were for rate control of atrial fibrillation. Axillary vein access was used in 62% of implants while cephalic vein and subclavian vein access were used in 35% and 3% of implants, respectively. The mortality rate during the follow-up period was 59%; 5% of patients died within 1 month of implant and 22% died within 1 year of pacemaker implantation (Figure 1). The complication rate was 4%. These included two pneumothoraces, one lead displacement requiring repositioning and one infected pacemaker requiring extraction. 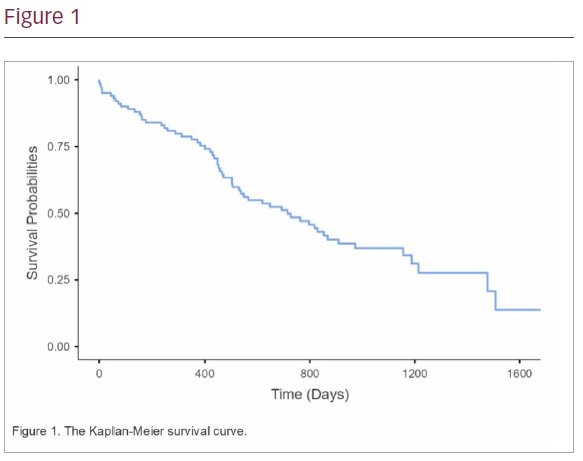