Introduction: The recently introduced DiamondTemp® (DT; Medtronic, Minneapolis, USA) has been proved non-inferior to standard irrigated force-sensing radiofrequency (RF) catheters with respect to safety, efficacy and procedural efficiency. Paired with the RealTemp® (Medtronic) technology, the diamond-embedded composite-tip is able to accurately measure tissue surface temperature in real time, and promptly adjust RF power accordingly (Figure A). This contributes to safer transmural lesions, by lowering the risk of charring and tissue disruption. Despite these advantages, the DT® still needs to be used in conjunction with non-native systems, which can be associated with technical challenges and limitations. To date, no data have been published on its combined use with Rhythmia® (Boston Scientific, Marlborough, USA).

Objective: To evaluate the safety and efficacy of the DT® catheter, in association with the Rhythmia® mapping system, during ventricular and atrial – typical atrial flutter (T-AFL) – ablation procedures.

Methods: Prospective registry including patients referred for both T-AFL and ventricular tachycardia (VT), who underwent ablation with DT® and the Rhythmia mapping system. All the procedures were performed under general anaesthesia, with pre-ablation mapping carried out using the Orion® basket catheter (Rhythmia®). Patients with T-AFL underwent a conventional cavo-tricuspid isthmus (CTI) line, with an acute endpoint of bidirectional block. For VT patients, a substrate-based ablation strategy was pursued, targeting ablation of late potentials in the scar border zone, with an acute endpoint of lack of inducibility during programmed stimulation. Access to the left ventricle was gained via a single transeptal puncture. For both T-AFL and VT ablation groups, lesions were achieved with interrupted point-by-point ablation. Each lesion was delivered in a temperature control mode, set to 60°C (maximum power of 50 W). Ablation was continued for 3–5 additional seconds after a 75–80% reduction in the split-tip electrogram amplitude occurred. Ablation was also stopped if impedance dropped >15 ohms. The saline irrigation rate was 2 mL/min during mapping and 8 mL/min during ablation.

Results: Patient and procedure characteristics are detailed in the table (Figure B). The DT® near-field signal was comparable to that seen on the Orion® high density basket catheter (Figure C). Acute procedural endpoint was achieved in all cases. There were no acute complications, and, specifically, no incidence of steam pop or char formation. Procedure and fluoroscopy times were within expected limits, compared with published datasets. Both the ablation time (5 ± 2 min for T-AFL; 32 ± 11 min for VT) and fluid infusion volume (122 ± 44 mL for T-AFL; 319 ± 128mL for VT ablation) were reduced compared with the current body of available data, regarding conventional/standardised ablation settings.

Conclusion: This series of cases highlights for the first time, the feasibility of using the DT® catheter in combination with the Rhythmia® mapping system, and its effectiveness in the treatment of both atrial and ventricular arrhythmias. Acute success was achieved in all patients, with no acute complications, and lower ablation times and fluid infusion volumes than expected. Further data collection is ongoing. ❑ 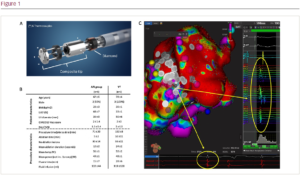