The implantation cardiac rhythm management devices is rising annually. The two known common complications of these devices, infection and pneumothorax, occur in 1.2% and 0.6% of patients, respectively. Pneumothorax is usually seen in the ipsilateral part of implantation however in some rare cases this will be seen in the contralateral part. Despite using cephalic vein cutdown or venogram assisted puncture of axillary vein to reduce this complication, pneumothorax remains the one of the most morbid complications post implant. In this article a rare case of bilateral pneumothorax will be presented and discussed.

The use of implantable cardiac rhythm management (CRM) devices has been on the rise worldwide with approximately one million implant per year.1 The two common complications of CRM device implants are infection and pneumothorax with the prevalence of 1.2% and 0.6% respectively.2 Despite the use of techniques to reduce pneumothorax, such as cephalic vein cutdown, venogram assisted puncture of axillary vein, and use of ultrasound guided vascular access, this complication still occurs in patients undergoing CRM implants. Pneumothorax typically occurs ipsilateral to the site of vascular access; however, there is a report of pneumothorax occurring on the contralateral side of the puncture3 or even bilaterally. Here we present a case with history of coronary artery bypass graft (CABG) surgery who developed bilateral pneumothorax following implantable cardioverter defibrillator (ICD) implantation.

Post procedure chest X-ray showed large bilateral pneumothorax, which was larger in the right side (Figure 1). The patient initially underwent an uneventful bilateral pleural drainage with pigtail which was unable to expand the lung adequately. He then underwent a bilateral chest tube which was followed by a third chest tube insertion in the middle of his chest due to lack of adequate lung expansion.

A chest computed tomography (CT) scan was conducted to elucidate the mechanism of pneumothorax and any underlying pulmonary pathologies. This revealed communication between the right and left pleural spaces through the anterior mediastinum (Figure 2), which is not an uncommon finding after cardiac surgeries involving midline sternotomies.

After five days, all tubes were removed, the chest X-ray showed full expansion of both lungs and the patient was discharged home.

Discussion
Although ipsilateral pneumothorax is the most common complication of subclavian puncture with the incidence of 0.6–7.5%,4 iatrogenic bilateral pneumothorax post median sternotomy has been previously reported. This issue has been first reported by Schorlemmer et al. in 1984 in a patient with previous median sternotomy who needed subclavian 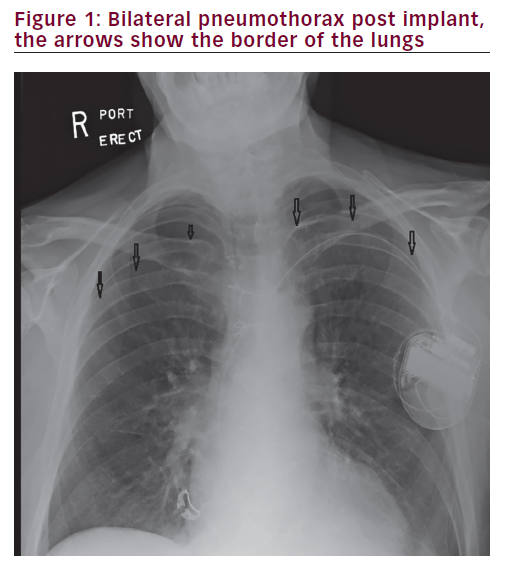 venous access for parenteral hyperalimentation.4 They explaind this entity as “Buffalo chest”. This is because of a unique anatomical variance in North American Buffalo species who have a single pleural cavity. This enabled Native Americans to kill them with a single arrow which collapsed both lungs! This pleura-pleura connection and spontaneous bilateral pneumothorax has been also reported post Nuss procedure for pectus excavatum2 contralateral pneumothorax has also been reported after revision of an active fixation atrial lead5 or after small perforation of pericardial cavity to a right sided bulla or pleural space.6,7

In the present case, the patient’s chest X-ray post CABG surgery was clear. We also made the same hypothesis of Buffalo chest post median sternotomy which was confirmed by chest CT scan (Figure 2). The fact that right sided pneumothorax was much larger than left side lead us to believe that there may be a type of unilateral valve that does not allow 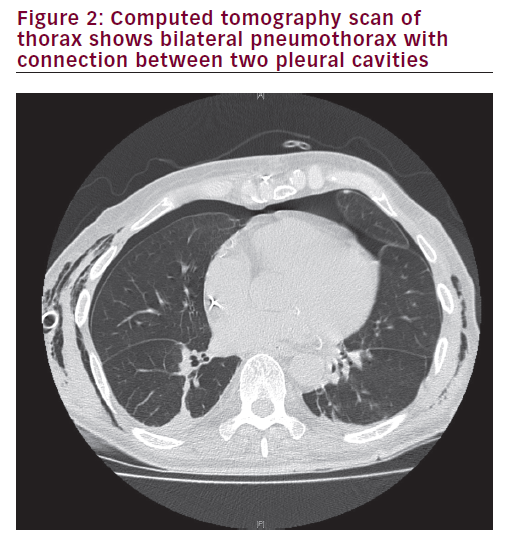 the right sided pneumothorax move easily into the left side; however, we were unable to confirm this.

In an elegant population-based cohort study which was published by Lin et al. and included average of 40,000 patients, the incidence of pneumothorax was around 0.6% with an increased risk in individuals who underwent cardiac resynchronisation therapy device implantation or had chronic obstructive pulmonary disease. The risk factors that can lead to pneumothorax are: puncture of subclavian vein, old age and female gender. Operator experience plays also an important role.8

This case illustrates the importance of understanding the alterations in the anatomy of pleural/mediastinal spaces following cardiac surgery. This knowledge should alert the operator about the potential, unusual complications and precautions that can be taken to avoid them.

Maryam Ayati, Syamkumar Divakara Menon, Carlos A Morillo, Jeffrey Healey and Stuart J Connolly have nothing to declare in relation to this article. No funding
was received for the publication of this article.
Compliance with Ethics Guidelines: All procedures were followed in accordance with the responsible committee on human experimentation and with the Helsinki
Declaration of 1975 and subsequent revisions, and informed consent was received from the patient involved in this case study.

This article is published under the Creative Commons Attribution Noncommercial License, which permits any non-commercial use, distribution, adaptation
and reproduction provided the original author(s) and source are given appropriate credit.