Background: Electrophysiology studies with radiofrequency cardiac ablation have heralded a new way to diagnose and treat cardiac dysrhythmias since their introduction in the late 1980s. Right-sided catheter ablation can be used to treat re-entrant supraventricular arrythmias, with ablation of certain pathways over 90% curative. Due to this success, the frequency of these procedures has been increasing year on year and as such it is important that we are fully informed of all the complications. One lesser studied possible complication is venous thromboembolism (VTE). While incidence and mortality associated with VTE has decreased over the years it is still the third most common cause of cardiovascular disease worldwide.

Cardiac catheter ablation demonstrates all aspects of Virchow’s triad for developing VTE; catheters are inserted into the femoral veins which causes direct endothelial damage, while intravascular sheaths and catheters cause venous stasis and induce hypercoagulability. In addition, ablation causes disruption of the cardiac endothelium causing activation of the clotting cascade. Symptomatic incidence of VTE after cardiac catheter ablation is reported as 0.6% and prophylaxis is not currently routinely recommended, however incidence has not been systematically studied and this unpredictable and often devastating complication, could be under recognised. Asymptomatic proximal thrombus conveys a risk of pulmonary embolism, mortality and long-term morbidity and as such NICE guidelines recommend anticoagulation treatment if identified. Our objective was to determine the incidence of deep vein thrombosis (DVT) following right-sided cardiac ablation.

Methods: Patients undergoing catheter ablation for supraventricular arrythmias were prospectively recruited into the study. They underwent follow up at 24 hrs and between 10–14 days with bilateral compression venous duplex ultrasonography from the inferior vena cava to the popliteal vein. The uncannulated contralateral leg was used as a control. Any prior use of anticoagulant or antiplatelet agents or any peri-operative anticoagulation served as an exclusion criterion. Statistical analysis was by Chi-square test.

Results: At the interim analysis, 66 patients had completed the study with average age 49 years (±14) and a female predominance. There were significantly more DVTs detected in the right femoral vein, with no thrombus found in the control leg (p<0.05). Seven patients (10%) developed acute asymptomatic DVT; these predominantly occurred at the puncture site within the common femoral vein or the distal external iliac vein. Of the seven DVT’s, one was occlusive, and all had fresh appearing morphology as seen in Figure 1 below.

All DVT was treated with 3–6 months of anticoagulation as per NICE guidelines. Following treatment there were no incidences of symptomatic pulmonary embolus. From the cohort there were no personal or procedural factors which conferred a greater risk of developing VTE post-procedure.

Discussion: These results show DVT can occur following cardiac catheter ablation and may occur at a higher frequency than previously reported. As right-sided ablation is usually carried out to treat troublesome palpitations, not to reduce mortality, it is important all life-threatening complications are taken seriously. This study supports consideration of peri-procedural prophylactic anticoagulation. 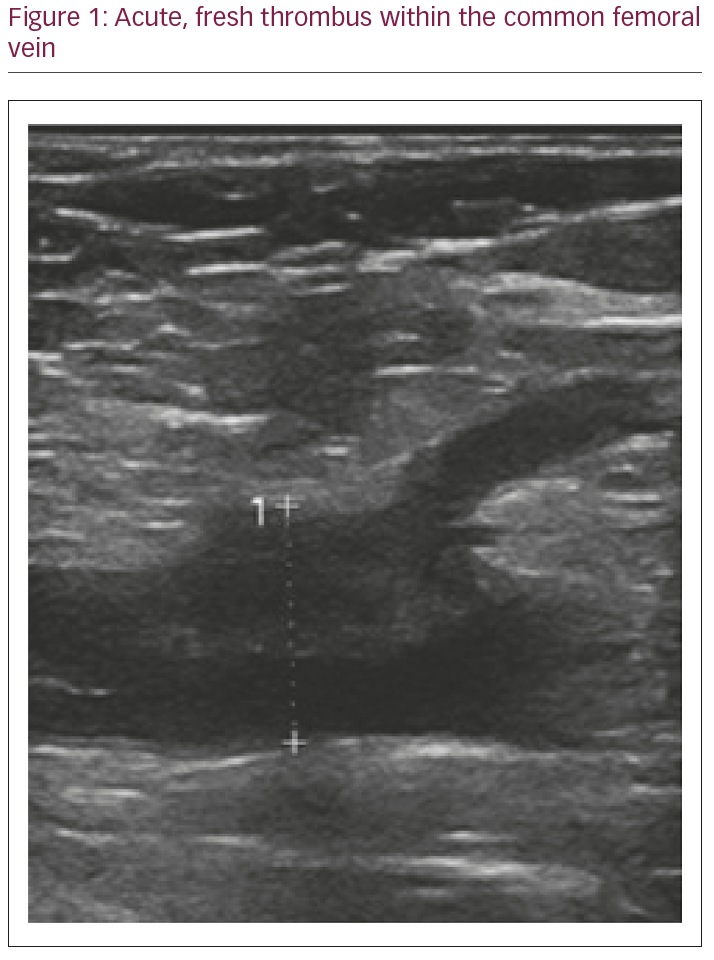