Background: Catheter ablation for atrial fibrillation (AF) often requires extensive creation of transmural thermal lesions in close proximity to the oesophagus. The resultant oesophageal injury accounts for the majority of ablation-related mortality. The purpose of this study is to compare an oesophageal temperature control device versus a standard temperature monitoring probe in its ability to protect the oesophagus from
ablation-related thermal injury.

Methods: The IMPACT pilot study is a single centre, prospective, double blind randomised controlled trial to investigate the ability of the EnsoETM device (Attune Medical, Chicago IL) to protect the oesophagus by local control of the luminal temperature during ablation for AF. This method is compared in a 1:1 randomisation to a control group in which we follow current standard practice with a temperature monitoring probe only. The study group undergo a baseline trans-oesophageal echo, then have the EnsoETM device placed in exchange for the echo probe and temperature control set to cool or warm according to the ablation modality. If using RF, the device is set to cool to 4 °C during ablation of the posterior wall. If using cryotherapy, the device is set to warm to 40 °C for the total duration of the procedure. The control group receive a temperature monitoring probe which we aim to place in the part of the oesophagus closest to the site of ablation. Ablation is halted if the temperature rises above 39 °C or falls below 20 °C, and we desist from therapy until the temperatures returns within safe limits.

The incidence of ablation-related oesophageal injury is determined by endoscopic examination performed at 5–7 days post ablation. Oesophageal injury is scored from 0–6 (0 = no injury; 6 = most severe). Patient symptoms suggestive of reflux or impaired gastric motility are recorded using a validated questionnaire (GerdQ; score range from 0–18. 0 = no symptoms, 18 = severe symptoms) at 3 months post-ablation.

The target study population is n = 120 with the two groups to meet a study power of 0.80 and a clinical difference of 10–15%. The patient and the endoscopist are blinded to the randomisation.

Results: At the time of writing, total recruitment is n = 40 but with endoscopy results available in n=31. Severe (grade 5–6) thermal injury was significantly more common in the control group 12.5% 2/16 (12.5%) than in the group receiving EnsoETM device protection 0/15, trending towards statistical significance (at present, p = 0.23).
No patient has reached the 3-month post-ablation follow-up point.

Conclusion: At the time of presentation, we will have completed recruitment. We will describe the effect of oesophageal luminal temperature control on thermal injury in AF ablation. We will analyse secondary endpoints including the effect on procedure duration, efficacy and the incidence of major adverse events. Subgroup differences between those who receive pulmonary vein isolation only or more extensive lesion sets and between RF and cryotherapy will be analysed. 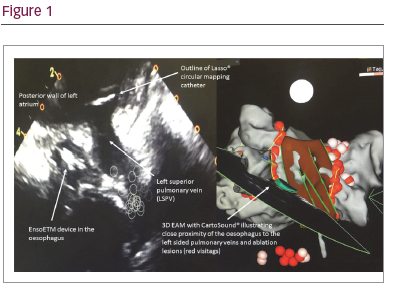