Methods: All patients undergoing convergent PsAF ablation at our centre were analysed. The Atricure Epi-Sense® system was used to deliver LA posterior wall radiofrequency ablation via trans-diaphragmatic, pericardial window access under direct endoscopic visualisation and with oesophageal temperature monitoring under general anaesthesia. Follow-on endocardial ablation was undertaken using radiofrequency PVI via trans-septal puncture with or without additional ablation.
Electro-anatomical mapping software was used. Demographic,
arrhythmia and procedural data were collected. Safety outcomes including peri-operative complications, death and stroke/transient ischaemic attack (TIA), as well as efficacy outcomes including freedom from documented or symptomatic AF were collected at 3-,6- and 12-months.

Results: From June 2017–March 2019, 24 patients underwent convergent PsAF ablation. Patient characteristics, procedure and outcome data shown in Table 1 below. Twenty-one (84%) were male with a median age of 63. Twelve (50%) were obese. Hypertension, obstructive sleep apnoea, diabetes and a smoking history were present in 46%, 17%, 8% and 38%, respectively. The majority (71%) had a CHA2DS2VASC score of 0–1. 71% had a severely dilated left atrium and the majority (63%) had preserved left ventricular function. Eighteen (75%) had AF duration >2 years with most (83%) reporting EHRA 2b (moderate) symptom burden.

A median of 25 (IQR 12; range 13–41) surgical lesions were delivered with 2 days median inpatient stay. Post-operative complications were minimal; See Table 2. Most percutaneous ablations consisted of PVI with or without roof line or floor lesions (21%, 21%, 42% respectively). Seventeen percent underwent more extensive electro-anatomically guided ablation. There were no endocardial procedure complications. There were three redo endocardial procedures within 12 months and one ablation for atrial tachycardia. At 12 months, all patients were alive with no new stroke/TIA. Freedom for documented or symptomatic AF at 3-, 6- and 12-months was 75%, 63% and 63%, respectively.

Conclusions: Our data suggest convergent AF ablation is effective with excellent immediate and long-term safety outcomes in a real-world cohort of patients with a significant duration of AF and evidence of established atrial remodelling. Freedom from AF at 12 months compares very favourably with existing techniques. Our safety and mortality data demonstrate good outcomes when compared with existing studies of convergent ablation. There was a low rate of re-do procedures or further ablation for related arrhythmia. Convergent AF ablation appears to offer a safe and effective option for those who are unlikely to benefit from existing therapeutic strategies for maintaining sinus rhythm and further evaluation of this exciting technique is warranted. 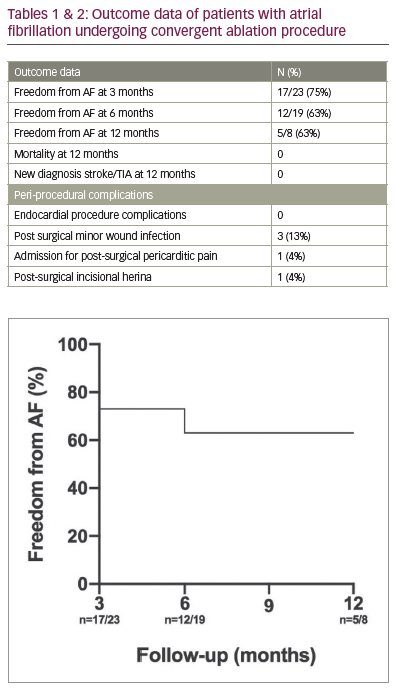