A 40-year-old male patient with Brugada syndrome underwent high-density endocardial voltage mapping (>1000 points) of the right ventricular outflow tract (RVOT) using a three-dimensional mapping system. Electroanatomical maps were performed before and after flecainide infusion (70 mg), setting the reference value for normal unipolar electrograms at >4 mV. A broader area of abnormal unipolar signals was developed at the free wall of the RVOT after flecainide infusion. Endocardial unipolar mapping after sodium channel challenge may accurately identify the epicardial arrhythmogenic substrate and may have potential clinical implications in endocardial ablation strategies.

Brugada syndrome (BrS) is a genetic arrhythmia syndrome with increased risk of sudden cardiac death. Unmasking a type I BrS electrocardiogram (ECG) pattern after administration of sodium channel blockers may be associated with an increase in epicardial substrate abnormalities. We hypothesised that high-density endocardial unipolar voltage mapping of the right ventricular outflow tract (RVOT), before and after flecainide infusion in a patient with BrS, may detect enhancement of the electroanatomical abnormalities possibly related to the modification of the abnormal epicardial tissue.

A 40-year-old male asymptomatic patient with BrS was referred to our centre and underwent electrophysiological study for risk stratification via programmed ventricular stimulation. Initially, he underwent high-density endocardial voltage mapping of the RVOT during sinus rhythm. Cardiac-magnetic resonance imaging ruled out structural heart disease. More than 1,000 points were sampled throughout the RVOT using a multi-electrode mapping catheter. The reference value for normal unipolar electrograms was set at >4 mV and electroanatomical maps were performed before and after flecainide infusion (70 mg). As shown in Figure 1, the patient displayed a small area of unipolar voltage abnormalities beneath the pulmonary valve (Figure 1A). After administration of flecainide, a Brugada ECG pattern with typical coved ST elevation >2 mm in right precordial leads is seen (Figure 2), and a broader area of abnormal unipolar signals was developed at the free wall of the RVOT (Figure 1B). Programmed ventricular stimulation was performed from the right ventricle, inducing ventricular fibrillation (VF) (Figure 3). Endocardial unipolar mapping after sodium channel challenge may accurately identify the epicardial arrhythmogenic substrate and may have potential clinical implications in endocardial ablation strategies. 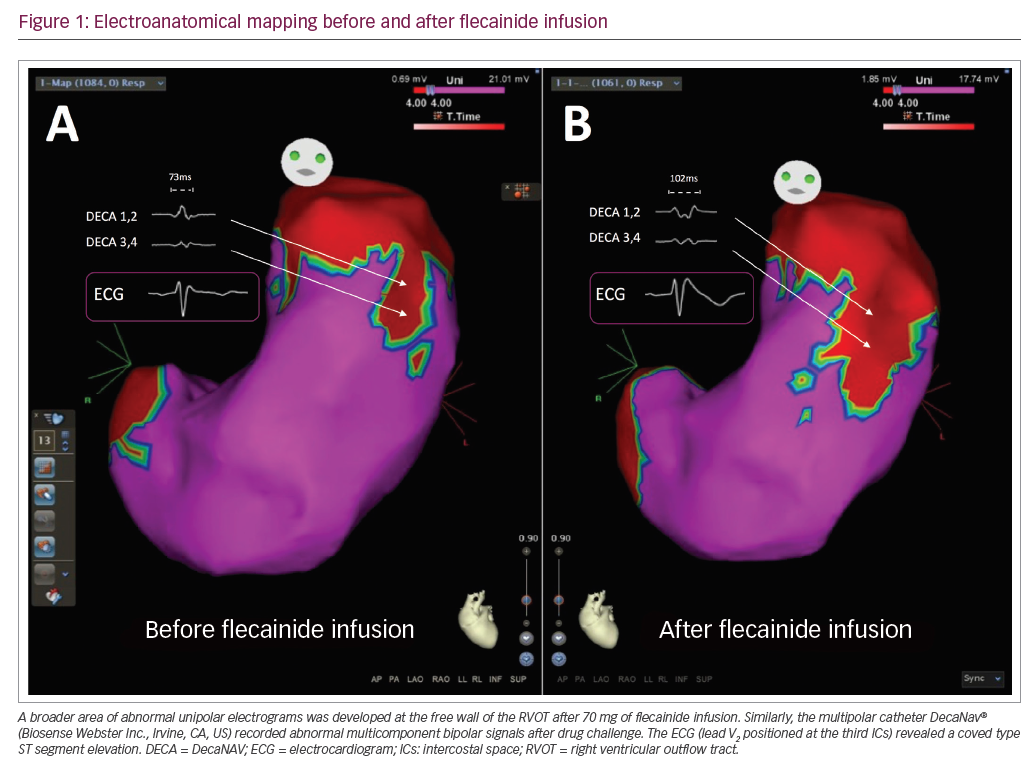 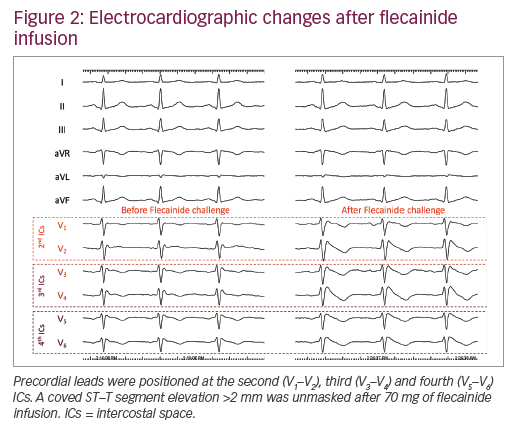 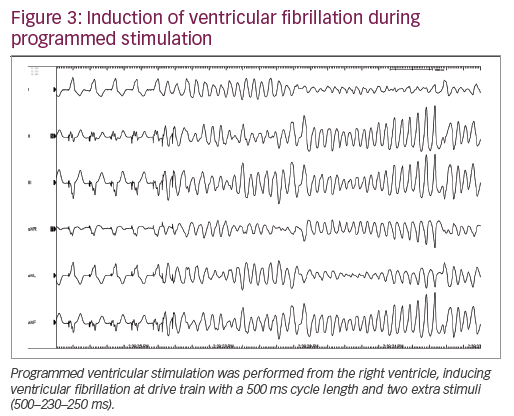 Dimitrios Asvestas, Antigoni Sakellaropoulou,
Panagiotis Mililis, Michael Efremidis, Antonios Sideris and
Konstantinos P Letsas have nothing to declare in relation
to this article.

All named authors meet the criteria of
the International Committee of Medical Journal Editors
for authorship for this manuscript, take responsibility
for the integrity of the work as a whole and have
given final approval for the version to be published.

This article is published
under the Creative Commons Attribution Noncommercial
License, which permits any non-commercial
use, distribution, adaptation and reproduction
provided the original author(s) and source are given
appropriate credit. © The Authors 2018.
Compliance with Ethics : All procedures were followed
in accordance with the responsible committee on human
experimentation and with the Helsinki Declaration of
1975 and subsequent revisions. Informed consent was
received from the patient involved in this case study. 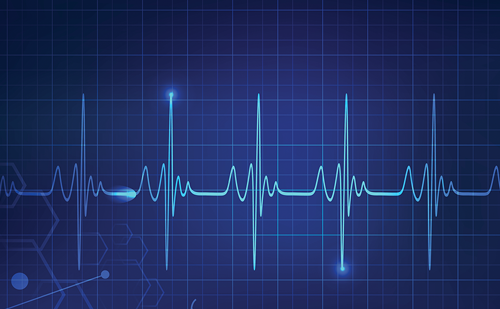