Background/Introduction: Atrial fibrillation (AF) is a common condition in patients presenting acutely to hospital. A simple model which could be applied as a point-of-care test could screen for patients needing referral for diagnostic testing or identify patients with asymptomatic AF. A model incorporating simple clinical characteristics and blood biomarkers has previously been developed using robust data-driven statistical and machine learning methodologies. Here, we validate the model using data not included in model development.

Methods: We quantified plasma levels of two protein biomarkers which were previously identified as associated with prevalent AF (N-terminal prohormone of brain natriuretic peptide, NTproBNP, and fibroblast growth factor 23, FGF23) in patients presenting to a large teaching hospital. This study is part of the Birmingham and Black Country Atrial Fibrillation Registry (BBC-AF). Data from these patients were fitted to the previously derived model (age, sex, BMI, BNP, FGF23). Adjustments to the data were made to accommodate differences in biomarkers quantified (BNP versus NTproBNP) and measurement platforms (versus Roche Diagnostics). The model’s performance was quantified by the C-statistic and 95% confidence intervals (CI).

Conclusions: We developed a model incorporating three simple clinical risk factors (age, sex, and BMI) and two biomarkers (BNP and FGF-23) to identify patients with AF. The model performed well in a validation with data not used for model development. The model was robust despite known biological differences between BNP and NTproBNP, as well as being measured on different quantification platforms. We call for further external validation in other heterogenous cohorts. 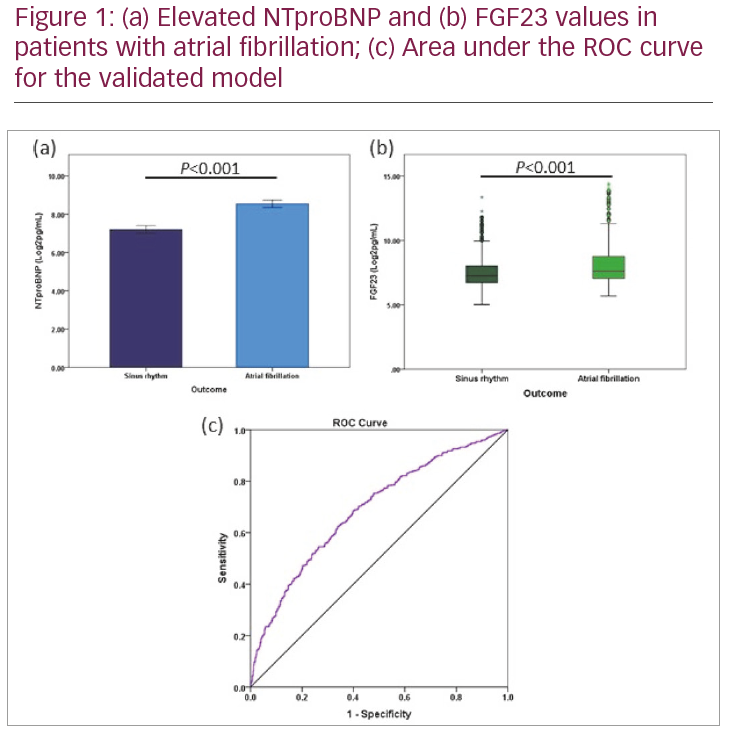