Background: Atrial fibrillation (AFib), the most common arrhythmia affects an estimated six million people in the United States and affects approximately 2% of people younger than 65.3 AFib increases the risk of having an AF-related stroke by five times and attributes to 130,000 deaths annually.3 Arrhythmia Alliance1 (A-A) works to improve the diagnosis, treatment and quality of life for those affected by arrhythmias. As a coalition of charities, patients, medical groups and allied professionals, A-A promote timely and effective diagnosis and treatment of arrhythmias. The lifetime risk of developing AFib is one-in-four and detection is cheap and easily done with a simple pulse check; however, many are unaware of their heart rate and rhythm.

Methods: Data sources used include entry forms, resource records and the AliveCor Kardia device. Prior to using the device for rate and rhythm checks, entry forms were completed. The AliveCor Kardia device electronically saved EKG data and patient information. Education was offered through printed resources, an A-Fib seminar (hosted by a board-certified cardiologist) and two visual demonstrations on lifesaving skills (provided by a local fire district).

Objectives: To increase awareness of arrhythmias and reduce the rate of undiagnosed AFib patients:

Results: Ninety-two pulse checks were conducted. A total of 65 were classified as normal, 25 were documented as unclassified and two were identified as atrial fibrillation. Twenty-one students took part in the A-Fib seminar and over 50 resources were distributed. Overall the event reached approximately 300 university students, faculty and staff. 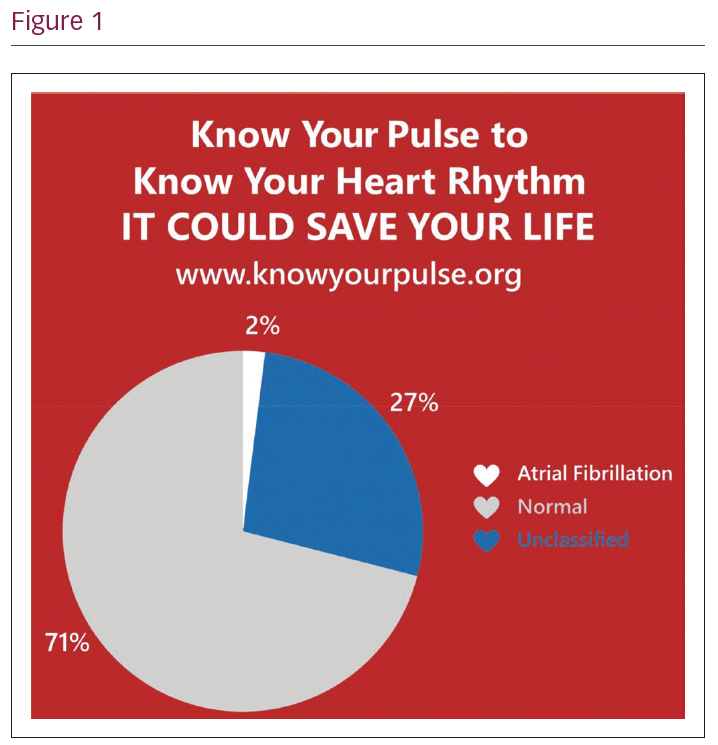