Background: Electrical cardioversion (ECV) is frequently performed to treat persistent atrial fibrillation (AF). Although several large trials have suggested that rate control in AF may be non-inferior to rhythm-based strategies, individual patients may have better outcomes in terms of quality of life if sinus rhythm (SR) is achieved and maintained. This real-world, retrospective, observational study aimed to define the success rate and role of ECV in the management of persistent AF in the era of catheter ablation. Methods: All patients who underwent ECV for symptomatic persistent AF at our institution between January 2014 and August 2019 were analysed. Clinical and echocardiographic baseline characteristics were used to identify independent predictors for AF recurrence at 12 and 24 months using a Cox multivariate model. Results: We identified 1,028 consecutive patients with symptomatic persistent AF, 319 of whom were subsequently excluded from the study because they either spontaneously reverted to SR prior to ECV or declined ECV. We evaluated 701 patients (mean age 71 ± 10.8 years, male 70.2%). Acute success was achieved in 96.8% of patients. SR at 12 and 24 months was seen in 26.6% and 14.3% of patients (p<0.0001), respectively. SR at 12 months was seen in 20.4% of patients with a left atrium (LA) diameter of ≤4 cm and in 6.2% of patients with an LA diameter of >4 cm (p<0.0001). At 24 months, SR was seen in 11.5% of patients with a LA diameter of ≤4 cm and in 2.8% with a diameter of >4 cm (p<0.0001). Predictors of SR at 12 months on univariate analysis were normal left ventricular systolic function and mild left ventricular systolic impairment (odds ratio [OR] 1.61, 95% confidence interval [CI] 1.08–2.45, p=0.021 and OR 0.5, 95% CI 0.24–0.94, p=0.043, respectively). In addition, flecainide and sotalol therapy improved the chances of SR at 12 months (OR 2.87, 95% CI 1.16–7.12, p=0.021 and OR 2.25, 95% CI 0.98–5.05, p=0.049, respectively). Multivariate analysis revealed no further positive predictors for SR maintenance in 24 months. Conclusion: ECV was not an effective long-term strategy for the maintenance of SR.

Atrial fibrillation (AF) is the most common sustained cardiac arrhythmia and a major cause of morbidity and mortality; however, an optimal strategy for its management remains somewhat unclear, especially for patients with persistent AF.1

Electrical cardioversion (ECV) is widely used in patients with persistent AF when a rhythm control strategy is pursued. In this real-world, observational study, we aimed to define the success rate of ECV in restoring sinus rhythm (SR) and to identify predictors for sustained SR at 12 and 24 months.

This study was approved by the Health Research Authority and Care Research Wales (England and Wales, UK) (Approval number: 272491). All patients provided informed consent to undergo the procedure described in this study. No further consent was required. The study is reported in accordance with the Strengthening the reporting of observational studies in epidemiology (STROBE) guidelines.2

Data from patients undergoing ECV at Darent Valley Hospital (Dartford, Kent, UK) were prospectively collected in an ECV database. For the current study, all patients who underwent ECV for the treatment of persistent AF between January 2014 and August 2019 were included in the analysis. Patients had to have experienced persistent AF for a minimum of 2 months and must have been on anticoagulation for at least 4 weeks. Data from patients who reverted to SR before ECV, or patients on warfarin with subtherapeutic international normalised ratios were excluded from the analysis. The outcomes of patients who either declined catheter ablation or were not considered for catheter ablation during the study period were analysed.

In brief, patients were started on an oral anticoagulant therapy, which was continued for at least 4 weeks before ECV. For patients taking the vitamin K antagonist (warfarin), a therapeutic/stable international normalised ratio was required for 6 weeks prior to ECV.

ECV was performed with the patient under deep sedation with intravenous midazolam and/or propofol administered by a cardiac nurse. Blood pressure and pulse oximetry were continuously monitored during the procedure by an anaesthetist.

A biphasic defibrillator with antero-posterior electrode positioning was used to deliver escalating shock energies as follows: 150 J, followed by two further shocks of 200 J if the first attempt was unsuccessful. A 12-lead electrocardiogram was performed before and after ECV.

The primary endpoints were acute success in restoring SR after ECV and SR maintenance at 12 and 24 months post ECV. The secondary outcomes were predictors of SR such as left ventricular (LV) systolic function, use of antiarrhythmic drugs and ECV complications such as stroke, anaesthetic complications, ventricular fibrillation, bradyarrhythmias, myocardial necrosis, myocardial dysfunction, transient hypotension, post-ECV pulmonary oedema and skin burns.

Baseline characteristics were summarized numerically for categorical variables and as median values with 25th and 75th percentiles for continuous variables, according to the success of ECV. Cox proportional hazards models were used to identify factors associated with maintenance of SR following ECV at 12 months and 24 months and are presented as odds ratios (ORs) and 95% confidence intervals (CIs). The data analysis was performed using RStudio version 4.0.0 (RStudio, Boston, MA, USA). 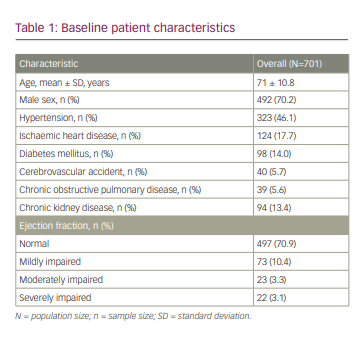 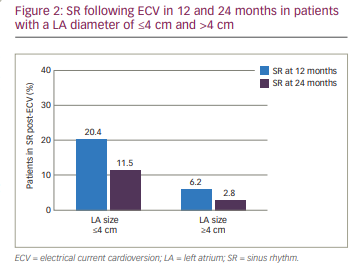 Predictors for sinus rhythm at 12 months 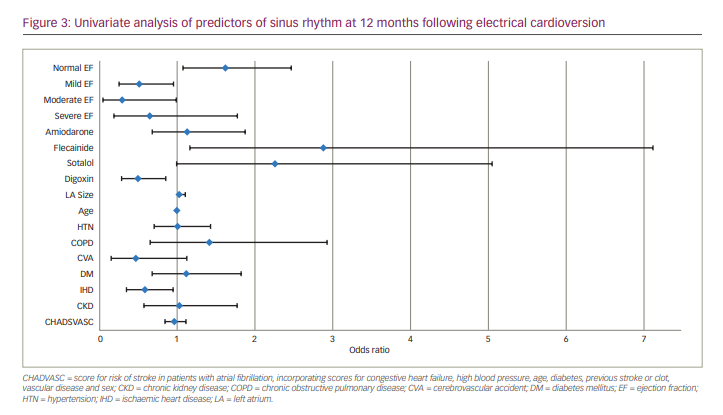 The restoration of SR using ECV in patients with symptomatic persistent AF can improve cardiovascular haemodynamics, functional status and quality of life.3 In this single-centre retrospective registry study, we investigated the acute and long-term success of ECV in restoring and maintaining SR. The study is unique, as the population comprised patients who did not undergo catheter ablation as part of their treatment, either because they declined the procedure when offered or because they were unsuitable for this treatment; therefore, none of the patients underwent catheter ablation during the study period. Acute success was high at 96.8% and is, therefore, comparable to previous studies, which have reported success rates of between 90.0% and 100.0%.4

Unsurprisingly, patients with normal LA size and/or preserved LV systolic function had better outcomes at both 12 and 24 months. Normal LA size (<4.5 cm) has previously been shown to be a predictor of improved outcomes, which is consistent with our findings.5 In contrast, no correlation between LV systolic function and ECV outcomes has been reported previously, which is inconsistent with our findings.6,7 Of the various factors such as age, sex, arrhythmia duration, hypertension, rheumatic and non-rheumatic mitral valve disease previously investigated as predictors of success and better outcomes post-ECV, only short AF duration has been shown to predict better outcomes.8–10 It is plausible that LA remodelling that occurs with long-duration AF plays a role in LA size, which contributes to poor outcomes post-ECV.

Pre-treatment with flecainide and sotalol increased the chances of staying in SR at 12 months. Flecainide and sotalol can be used in patients without significant structural heart disease, and this may explain why patients who were pre-treated with these agents had relatively good outcomes. Previous studies have reported a modest benefit of amiodarone that is comparable to sotalol in maintaining SR following ECV in persistent AF.11 However, in contrast to these studies and in agreement with a study by Le Son et al., we found that amiodarone did not improve the chances of staying in SR,12–15 perhaps because patients with moderate–severe LV systolic dysfunction or significant structural heart disease are more likely to be given amiodarone rather than flecainide or sotalol for safety reasons.

Catheter ablation is widely available, safe and effective.17 In contrast, ECV has poor long-term efficacy;18 indeed, in our study, only 26.6% and 14.3% of patients remained in SR at 12 and 24 months, respectively. This brings into focus the role of ECV for persistent AF in the current era of catheter ablation availability.

ECV may have a role in determining whether or not patients are truly asymptomatic, sometimes referred to as ‘diagnostic ECV’, selecting patients who can then be referred for catheter ablation. Diagnostic ECV may also be useful to show an improvement of symptoms (or not) when in stable SR and to assess LV function improvement in SR. This information can then be used in determining which patients can be referred for catheter ablation.

ECV is frequently required for early AF recurrence after catheter ablation. One study suggested that early post-ablation ECV failure is not associated with long-term rhythm outcome,19 whereas another found that failed ECV during the blanking period was an independent predictor of future recurrence of AF.20 Outside these specific situations, the role of ECV in long-term maintenance of SR remains poorly defined. We propose a strategy for identifying patients with persistent AF who may benefit from ECV therapy (Figure 4). 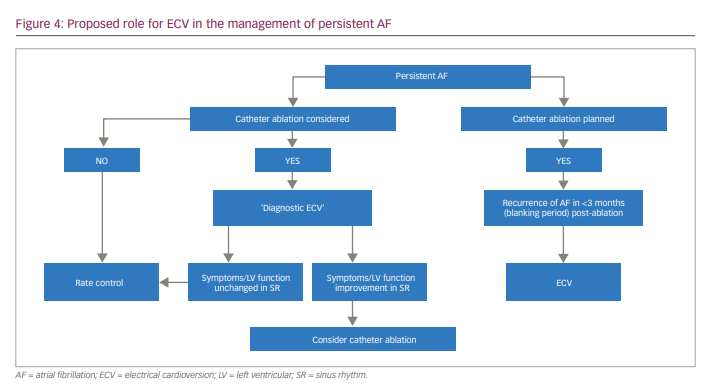 This was an observational study that used consecutive patients at a single institution, and the results should be interpreted with caution. The retrospective analysis of databases may have underestimated a number of minor complications following ECV and includes inherent selection bias. We determined the AF duration based on the first electrocardiogram documentation; therefore, patients with asymptomatic AF and/or paroxysmal episodes may have been misclassified.

All procedures were followed in accordance with the responsible committee on human experimentation and with the Helsinki Declaration of 1975 and subsequent revisions, and informed consent was received from all patients.

This article is freely accessible at touchCARDIO.com. © Touch Medical Media 2022

We are thankful to Darent Valley Hospital for the support provided in the course of this study.

The datasets generated during and/or analysed during the current study are available from the corresponding author on reasonable request. 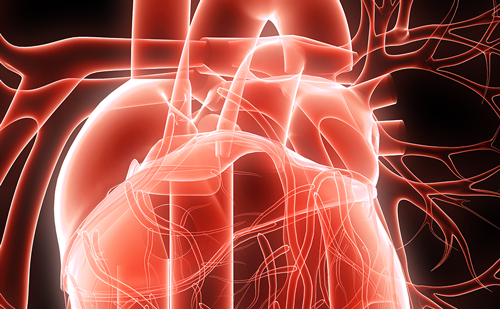 Atrial fibrillation (AF) is the most common type of treated cardiac arrhythmia. The prevalence of the condition increases with age, and it presents with a wide spectrum of symptoms and severity. As the population ages, particularly in developed countries, the burden of AF increases.1 Compared with sinus rhythm, AF is also associated with an increased incidence of […]