A 47-year-old man was admitted to the Santa Casa de Misericórdia Hospital in Belo Horizonte, Brazil, with recurrent signs and symptoms of tachycardia, palpitation and fatigue. During medical examination, an electrocardiogram and 24-hour Holter monitoring were performed, which identified a predominant atrial flutter rhythm and, after transthoracic echocardiography, the patient was diagnosed with cor triatriatum sinister. The condition is a rare congenital heart disease characterised by the presence of a fibrous membrane that divides the left atrium into two separate chambers. The disease is especially evident during childhood; however, some cases show no signs until adulthood, which makes the presentation even more unique. In this case, clinical medication and electrical cardioversion were chosen as treatments, which caused progression to sinus rhythm and improvement of symptoms. Therefore, due to the stability of the condition, continuous follow-up with a cardiologist was implemented.

First described in 1868 by WS Church, cor triatriatum sinister (CTS) is one of the rarest congenital heart diseases in the world, with an estimated incidence of 0.1%.1,2 It is characterised by the presence of a fibrous membrane that divides the left atrium into two different regions: a proximal chamber with the pulmonary veins and another distal chamber with the mitral valve and the left atrial appendage.3 There are several theories regarding its cause, with anomalous growth of the septum primum during embryogenesis being the most widely cited.4–8 This disease is especially evident during childhood; however, some cases show no signs until adulthood. The most common symptoms are dyspnoea, haemoptysis, orthopnoea and chest pain.9 Symptom severity in CTS is variable, which also affects the recommended treatment options. For patients with late diagnosis and less severe obstruction, surgery may be unnecessary.10 Currently, there are no formal guidelines concerning the ideal timeframe for surgical correction, owing to the rarity of the disease.11

A previously healthy 47-year-old male sought outpatient public healthcare for dyspnoea associated with fatigue and palpitation. Electrocardiogram (ECG) showed atrial flutter and the patient was transferred to intermediate hospital healthcare for heart-rate control. After beta-blocker and anticoagulant therapy, the patient developed clinical improvement and was discharged from hospital with outpatient follow-up. Thirty days later, at a follow-up appointment, 24-hour Holter monitoring was performed, which showed atrial flutter with a variable degree of atrioventricular block. As the symptoms persisted, the patient sought emergency medical care again and the patient was transferred to advanced hospital care. Physical examination was performed, which did not reveal any abnormalities. ECG (Figure 1) showed atypical atrial flutter with variable atrioventricular block, and chest X-ray (Figure 2) revealed normal structures. Transthoracic echocardiogram with doppler (Figures 3 and 4) showed normal dimensions in the left atrium and the presence of a filamentous membrane subdividing the atrium, with a flow passage through the central portion – apparently single foramen – without generating significant gradient (peak gradient 7.63 mmHg and mean 3.2 mmHg, mean velocity 1.2 m/s). This was suggestive of CTS. The echocardiogram also showed the left ventricle had no segmental deficit; however, there was mild mitral regurgitation and tricuspid valve with prolapse and mild tricuspid regurgitation. Pulmonary artery systolic pressure 25 mmHg. Transoesophageal echocardiography revealed the absence of thrombi in the left atrium and the presence of a left intra-atrial membrane, suggestive of non-restrictive CTS with a central opening, approximately 0.6 cm diameter. Consequently, treatment with 100 j of electrical synchronised cardioversion was initiated, the patient then developed ventricular fibrillation, was defibrillated with 200 j and returned to sinus rhythm. Due to clinical progress and asymptomatic condition, the patient was discharged with a proposal to keep anticoagulant and antiarrhythmic medications continuously and outpatient follow-up with a cardiologist. 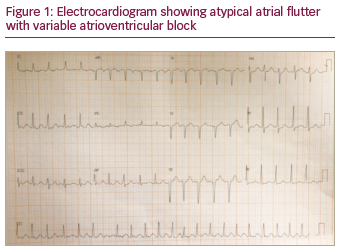 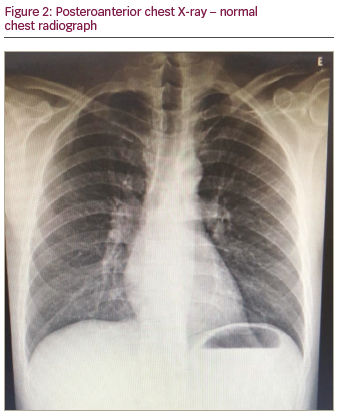 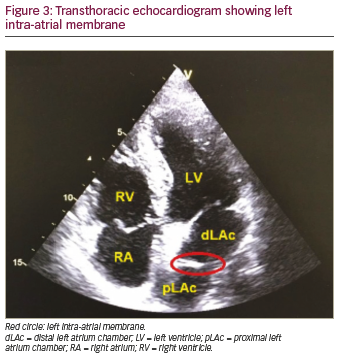 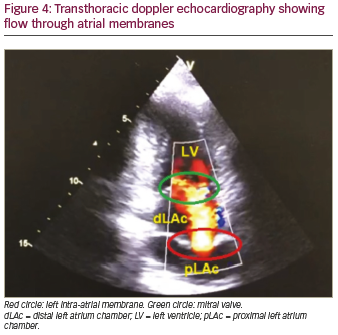 CTS can occur in isolation or, even more frequently, with other congenital heart diseases.12 The referred patient, however, did not present other associated innate alterations. Several classifications have been proposed throughout history, among which, the most utilised was formulated by Loeffler, who divided the CTS into three distinct groups:

The non-manifestation of the disease in childhood is due to the remaining large communication between the left atrial chambers that allows the necessary haemodynamic circulatory exchange.4 Overall, those in the
third group are likely to survive to late adulthood and often show little or no evidence of the disease.9,14 With regards to the patient concerned in this case report, he is classified as Loeffler grade III due to the wide opening in his membrane associated with minimal peak gradient between the intra-atrial chambers and its manifestation in adulthood.

Clinical presentation in previously asymptomatic adults with CTS may occur and be caused by fibrosis and calcification at the membrane opening, leading to narrowing, obstruction and mimicking of mitral stenosis. In addition, the increased incidence of mitral regurgitation with advancing age may also contribute to the development of atrial fibrillation.15 Atrial arrhythmias are common in CTS, with atrial fibrillation being described in 30% of studies on adults with CTS.8 Nevertheless, only two cases were found in the literature concerning CTS with atrial flutter.16,17 It is known that atrial flutter can be caused by several structural
conditions, including mitral stenosis and regurgitation, which can be mimicked in CTS.16 The patient in this case developed signs and symptoms in adulthood, including atrial flutter and variable atrioventricular block, as well as signs of mitral valve regurgitation; therefore, there are slight similarities with the pathophysiology described in the literature.

The diagnosis of CTS can be established through imaging exams such as transthoracic echocardiogram and transoesophageal echocardiography, which may be necessary to characterise, delineate and differentiate it from other cardiac anomalies, for example, atrial septal defect and supravalvular mitral annulus.18,19 The natural history of CTS is clinical stability without progressive left atrial obstruction, especially in patients with CTS without other congenital alterations and in those with an initial diagnosis made in adulthood.20 Thus, in older adults, comorbidity control and clinical follow-up alone may be sufficient.15 Surgery is the definitive treatment for this congenital condition, and, for adults, it has been indicated for symptomatic
patients despite pharmacological treatment. The traditional technique consists of total resection of the left intra-atrial fibrous membrane and remains the gold standard in the management of symptomatic CTS.21,22

Because of the classic features of the disease, the rarity of this case is even more surprising, owing to the range of unique signs and symptoms. The proposed initial management and persistence of symptoms led to the need for more complex examinations, which were crucial for the establishment of accurate diagnosis and specific therapy. Outpatient follow-up with a cardiologist is a fundamental part of this patient’s treatment, since the underlying cause of the disease was not altered, but controlled. Therefore, the patient is to be routinely monitored, so that if any changes in the patient’s condition are spotted in the future, the choice of therapy for the patient can be re-evaluated accordingly.

Thauler Alves de Oliveira and Renan Attílio Santos Marquiori have no financial or non-financial relationships or activities to declare in relation to this article. 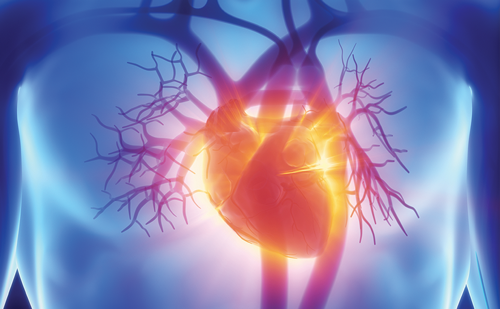 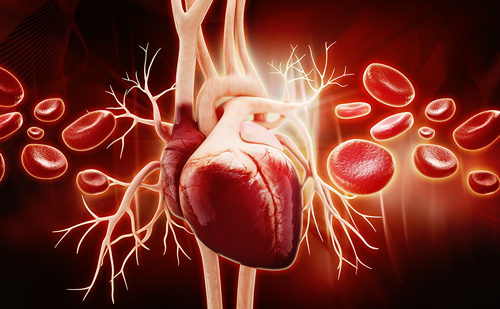