Introduction: Conducted energy devices (CED), commonly branded as ‘Tasers’ were authorised for use by specially trained officers in response to incidents with potential conflict in the UK in 2008. When activated, probes deliver short bursts of electric current to the target with an open circuit peak voltage of 50,000 volts. Generation of an electromagnetic field during discharge mediates loss of voluntary muscle control in the target. Exposure of an implantable cardioverter defibrillator (ICD) to this electromagnetic field may lead to oversensing, which can inhibit pacing or lead to inappropriate device therapy. This case report describes the first device interrogation and outcomes of a patient following CED application during a confrontation with Police in the UK.

Results: A 42-year-old man with a background of idiopathic ventricular fibrillation (VF) arrest for which an ICD was implanted 5 years previously, presented with witnessed collapse. This had occurred following two reported episodes of CED discharge delivered by police officers. On admission, observations and biochemistry were normal. The patient had no recollection of the events leading up to CED discharge, but reported a sensation of a shock from his device at the time of contact.

Interrogation of the device revealed a functioning ICD with no abnormality of sensing and pacing function. He had minimal ventricular pacing. His programmed detection criteria for VF were HR >230 min-1 (260 ms) for 12 intervals with a redetection period of 6 seconds. There was an episode of VF recorded by the device with an aborted shock. The electrogram (Figure 1) demonstrated 13 intervals with a rate >230 min-1 over 3.0 seconds with the appearance of oversensing electromagnetic interference. This met criteria for VF and initiated ICD charging. The delivery of electromagnetic energy (and associated ICD oversensing) from the CED lasted 3.6 seconds and then was terminated. ICD charge time was 8.3 seconds and fortunately the ICD shock was aborted due to the device appropriately recognising sinus tachycardia at a rate 146 beats min-1, 5.6 seconds after episode initiation. We did not identify any ICD- or heart rhythm-related cause for his loss of consciousness and feeling of experiencing a shock and we presume this all relates to the CED discharge he received.

Conclusion: This case describes ICD oversensing and aborted shock after the use of a CED with a discharge time of 3 seconds. The redetection interval of this patient was 6 seconds, which is relatively short and it is therefore possible that the patient may have received an inappropriate ICD shock if a second CED discharge was used or the CED was set to deliver a longer episode. ❑ 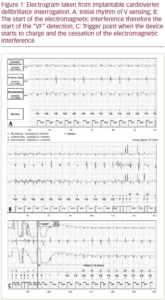