Phosphatidylinositol-4,5-biphosphate (PIP2) is implicated in the regulation and modulation of the IKS channel. The channel is formed at the plasma membrane by the co-assembly of KCNQ1 and KCNE1. Patients with Congenital Long QT 1(LQT1) syndrome are predisposed to Polymorphic VT due to mutations in KCNQ1, leading to impaired channel activity.

We initially transfect Human Embryonic Kidney (HEK) cells with a mammalian vector expressing KNCQ1 gene tagged with green fluorescent protein, along with KCNE1 to form the wild type (WT) IKS channel. The cells were also transfected with a constitutively active PI(4)P 5-kinase(PIP5K), which converts the phospholipid Phosphatidylinositol-4-phosphate to PIP2, therefore increasing endogenous levels of PIP2. To ensure the enzyme remains localised at the plasma membrane we attached it to CFP-FKBP and we co-transfected the cells with cherry tagged Lyn11-FRB construct that tethers to the plasma membrane. When these cells were perfused with Rapamycin it induced chemical dimerization of CF-PIP5K to lyn11. We utilised an inactive PIP5K as a control. Using a site directed mutagenesis kit we introduced mutations in KCNQ1 and to mimic Long QT 1 patients the mutants were co-transfected with WT KCNQ1 and KCNE1 to generate heterozygous genotype.

We substituted serine with alanine at site 27 and 92(S27A/S92A) to generate a mutant known to disrupt cAMP mediated upregulation, there was a statistical 3.3 fold (+80 mV) increase in current density when co-expressed with CF-PIP5K. We then substituted serine with aspartic acid (S27D/S92D) to create a Phosphomimetic mutation, this mutant reproduces the effects of sympathetic mediated augmentation of IKS channel. In the presence of enhanced PIP2 levels, the S27D/S92D failed to demonstrate a statistical increase in current, implying the channel is at its maximum activity and hence we fail to observe any further modulation.

We then proceed to interrogate how PIP2 interacts with sympathetic signalling system. Pseudojanin (PJ) causes depletion of PIP2 hence perturbing channel activity. When PJ was expressed with KNCQ1 and KCNE1 we observed an 80% reduction in channel activity at +80 mV (P <0.001). When we perfused these cells with isoprenaline the channel activity was restored to normal.

Here we illustrate how increasing PIP2 levels can revive IKS channel activity in mutant genotype therefore supporting evidence of its capabilities as a potential therapeutic tool. This modulation is independent of the PKA-cAMP system. 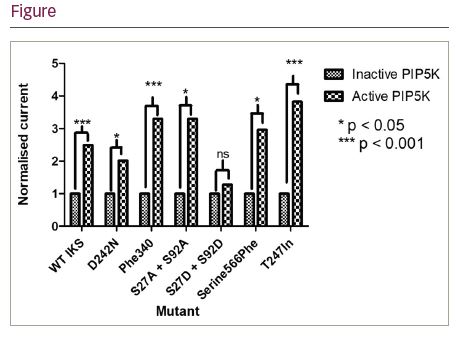