Background: The presence of dynamic substrate changes facilitates functional block and re-entry in ventricular tachycardia (VT) but are rarely studied as part of clinical VT mapping. We aimed to compare outcomes of ablation to dynamic functional substrate against standard institutional protocol.

Methods: Thirty patients (age 67 ± 9 yrs, 27 male) with ischemic cardiomyopathy undergoing clinical VT ablation for symptomatic ATP, symptomatic sustained VT or ICD shocks were enrolled form two UK centres. Mean ejection fraction was 25% (± 10%). Mapping was performed with the Advisor™ HD Grid multipolar catheter. A bipolar voltage map was obtained during sinus rhythm (SR) and RV Sensed Protocol (SP) single extra pacing. SP mapping (Figure 1A) involves finding the effective refractory period (ERP) of the single paced RV sensed extra (without a drive train), delivering single sensed extras at 20 ms above RV ERP every 5th beat, templating the morphology of this paced beat, and collecting points that match the template morphology to create a substrate map of this paced beat. SR and SP late potential (LP) and local abnormal ventricular activity (LAVA) maps were made and compared with critical sites for ablation, defined as sites of best entrainment or pace mapping (>96% pacematch), to assess their correlation to these regions. Ablation was then performed to critical sites and LP/LAVA identified by the SP at 50 W for 60 s. The outcomes of SP ablation were then compared to an institutional cohort of 30 patients who underwent historical VT ablation, matched for age and ejection fraction, where ablation was performed by conventional entrainment mapping ± sinus rhythm substrate mapping.

Results: At a median follow up of 12 months 90% of patients were free from symptomatic ATP or ICD shocks vs 60% from the historical institutional VT ablation cohort. Figure 1B shows the pre and post-procedure VT burden during SP VT ablation. SP pacing resulted in a larger area of LP identified for ablation 19.3 mm2 vs  6.4 mm2 during SR mapping (p=0.001), and SP derived LP displayed greater accuracy for critical regions for VT ablation with a true positive predictive value of 87% and false-positive predictive value of 4%, compared with 78% and 35% respectively in SR (Figure 1C). Figure 1D shows the Kaplan-Meier curve of the probability of ICD/CRT-D therapy with SP mapping vs standard institutional protocol. Patients were matched for Age (Age: SP vs Institutional: 67.2 ± 9.0 vs 68.5 ± 5.2, p=NS) and EF (EF: SP vs Institutional: 25.0 ± 9.6 vs 24.4 ± 7.8, p=NS), SP VT ablation resulted in a lower probability of VT(log-rank 0.006). 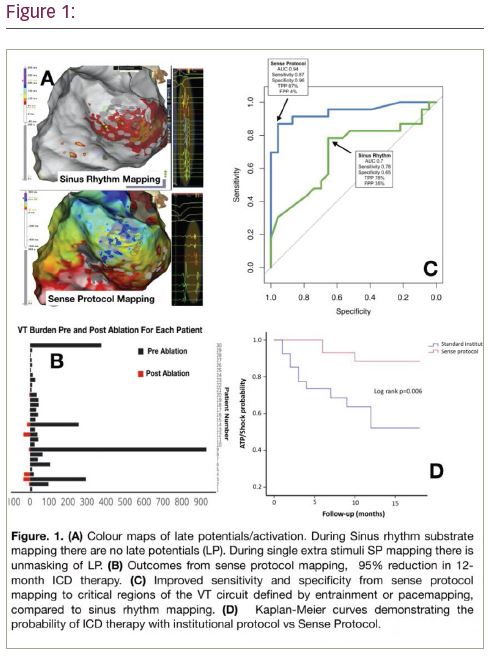 Paroxysmal supraventricular tachycardia (PSVT) defines a group of cardiac arrhythmias where the underlying mechanism is dependent upon structures at or above the level of the atrioventricular node. The recent PRE-EMPT study retrospectively evaluated health records of over 4.2 million people in the USA, estimating PSVT incidence at 73/100,000, and national prevalence at 168/100,000 (translating into […]

European Journal of Arrhythmia & Electrophysiology. 2021;7(1):Online ahead of journal publication

Several closely regulated ion channels are involved in the various phases of the myocardial action potential (phases 0–4) (Figure 1).1 In the absence of neuroendocrine and other regulatory signals, the pacing rate of the sinoatrial node is 100 beats per minute (bpm). However, heart rate is not fixed, and varies along with cardiac output in order […]

Supraventricular Tachycardia: Electrocardiogram Diagnosis and Clinical Management for the Non-electrophysiologist

European Journal of Arrhythmia & Electrophysiology. 2021;7(1):Online ahead of journal publication.

Supraventricular tachycardia (SVT) occurs with a prevalence of 2–3/1,000 in the general population and is characterised by atrial rates >100 beats per minute (bpm) at rest. Per definition, SVT originates in the atria or atrioventricular (AV) node tissue above the His bundle.1,2 Diagnosis and clinical management of SVT have been the focus of recent European Society […]