Background: Myocardial fibrosis is known to play a critical role in genesis and maintenance of ventricular fibrillation (VF). The quantity of fibrosis post myocardial infarction negatively correlates with survival. There is paucity of data on how the quantity and degree of fibrosis influences the mechanisms of VF. VF mechanisms remain debated, there are data supporting critical areas sustaining rotational drivers (RDs), while the contrary hypothesis is of disorganised myocardial activation only.

Purpose: We hypothesised that the underlying mechanism of VF is influenced by the degree and spatial distribution of myocardial fibrosis.

Conclusion: VF mechanisms occur along a spectrum between organised activity with discrete drivers and disorganized myocardial activation. The underlying VF mechanism can differ significantly dependent on the degree and pattern of fibrosis. Patchy fibrosis stabilises RDs with localization to discrete areas and sustains an organised form of VF comparative to CF where VF is largely disorganised. DF sustains an intermediate level of VF organisation. Characterising the degree and pattern of fibrosis in patient groups vulnerable to VF might be beneficial in identifying patients with targetable substrate. 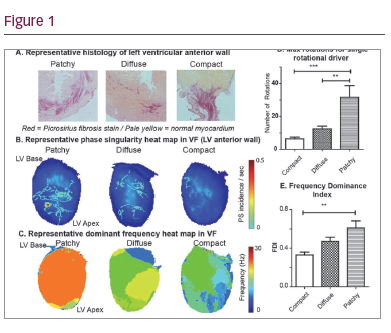