Background: Uncorrected atrial septal defects (ASD) are associated with atrial arrhythmias however the bi-atrial arrhythmia substrate, and a result, rhythm management strategies, are ill-defined in this cohort. Timely ASD closure may reduce AA prevalence, but the effect of percutaneous ASD closure on AAs has not been systematically evaluated. We aimed to investigate the effects of percutaneous ASD closure on AA prevalence and further sought to define the arrhythmia substrate in ASD patients with and without AAs, hypothesising that electrical and structural remodelling and ectopic foci would predominate in the right atrium and would be related to age and shunt fraction.

Methods: Meta-analysis was performed to determine the effects of percutaneous ASD closure on AA prevalence. Atrial EP studies were undertaken at percutaneous ASD closure with assessment of bi-atrial voltage, effective refractory periods (ERP) and conduction velocity (CV) and their restitution properties. Atrial late gadolinium enhancement cardiac MRI (CMR) was performed prior to ASD closure to quantify bi-atrial fibrosis. Triggers for AF were assessed using an isoprenaline ectopy provocation protocol and through assessment of ambulatory atrial ectopy on Holter monitoring. Comparison was made to non-congenital heart disease PAF patients who underwent the same protocol prior to and during first time ablation.

During isoprenaline infusion and on non-invasive assessment on Holter monitoring a non-significant trend towards a greater degree of provoked or ambulatory right-atrial ectopy was seen in ASD vs control patients.

Relationship Between Remodelling and Magnitude of Exposure to Shunt

No relationship was seen between the degree of structural and electrical remodelling and patient age or shunt fraction in the ASD group.

Conclusion: Changes of electrical and structural remodelling predominate in the right atrium in ASD patients and are not related to exposure to the shunt. Right atrial fibrosis is associated with AAs and may be of greater relevance to arrhythmogenesis than ectopic triggers suggesting a role for CMR in non-invasive risk assessment in this cohort. Differences in ERP and CV restitution between ASD and control patient may offer additional mechanistic insight into AAs. As percutaneous ASD closure alone is unlikely to be sufficient to treat AAs, strategies of adjunctive ablation at time of closure, including right-sided ablation, in patients with AAs, warrant investigation in a randomised controlled trial. 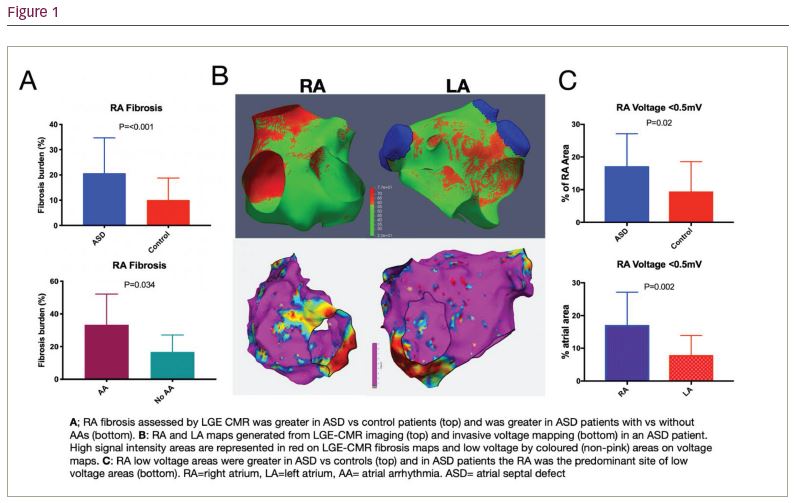