Background: Accurately determining atrial arrhythmia mechanisms from a 12-lead ECG can be challenging. Given the high success rate of cavotricuspid isthmus (CTI) ablation, accurate identification of CTI-dependent typical atrial flutter (AFL) is important for treatment decisions and procedure planning. Machine learning, with convolutional neural networks (CNNs) in particular, has been used to classify arrhythmias using the 12-lead ECG with great accuracy. However, most studies use human interpretation of the ECG as the ground truth to label the arrhythmia ECGs. Therefore, these neural networks can only ever be as good as expert human interpretation. We hypothesised that a CNN can be trained to classify CTI-dependent AFL vs non-CTI-dependent atrial tachycardia (AT), when using findings from the invasive electrophysiology (EP) study as the gold standard.

Methods: We trained a CNN on data from 231 patients undergoing EP studies for atrial tachyarrhythmia. A total of 13,500 5-second 12-lead ECG segments were used for training. Each case was labelled CTI-dependent AFL or non-CTI-dependent AT based on the findings of the EP study. The model performance was evaluated against a test set of 57 patients. A survey of electrophysiologists and cardiologists in Europe was undertaken on the same 57 ECGs.

Results: The model had an accuracy of 86% (95% CI 0.77–0.95). The F1 score was 0.87. The AT/AFL network correctly identified AT 82% and AFL 90% of the time. A saliency map can be used to help understand why a CNN predicted a particular outcome. This is achieved by mapping the outcome back to key areas of the input that most influenced the network in producing the classification result. Figure 1 presents the saliency mappings of an example 12-lead ECG for each class of AFL and AT. The network used the expected sections of the ECGs for diagnoses; these were the P-wave segments and not the QRS or other unexpected segments. There were 12 respondents in the clinician survey. These respondents included nine electrophysiologists. The median accuracy was 78% (range 70–86%). The electrophysiologists had a median accuracy of 79% (range 70–84%). Humans were more likely to incorrectly diagnose AFL as AT (on average incorrect diagnoses: 9 AFL, 1 AT). In comparison, the neural network most often incorrectly diagnosed AT as AFL (incorrect diagnoses: 5 AT, 3 AFL). In the two-thirds of test set cases (38/57) where both the model and electrophysiologist consensus were in agreement, the prediction accuracy was 100%. 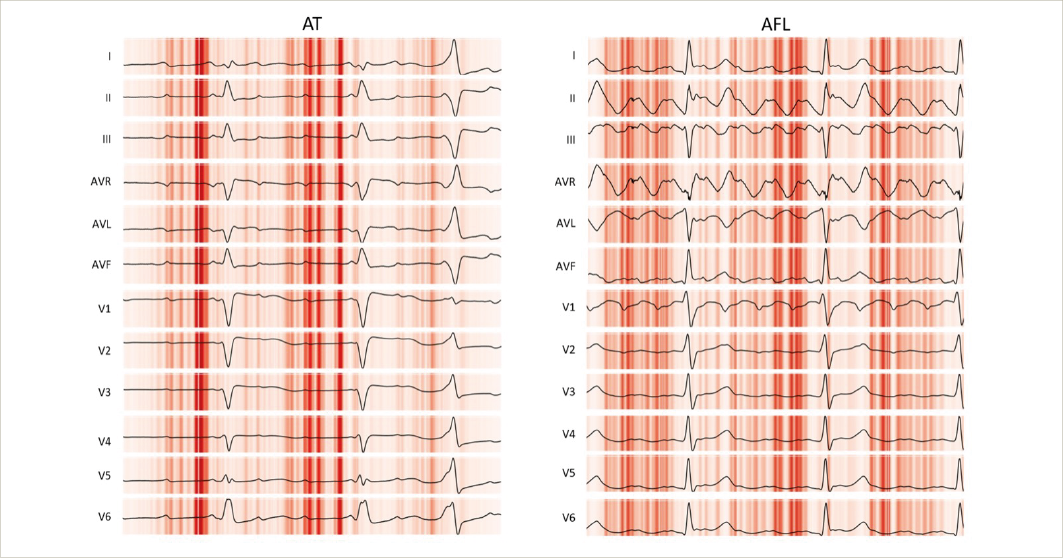