Objective: The purpose of this study was to investigate whether VT ablation long-term outcome was improved with the use of high-density mapping catheters combining complementary mapping strategies into a strict mapping and ablation workflow.

Results: A total of 73 structural heart VT ablation procedures were performed with 33 HD Grid mapping cases and 40 non-HD Grid cases with no significant difference in baseline characteristics. Substrate mapping was performed in 97% (71/73) of cases and activation maps used to guide ablation were successfully generated in 82% of HD Grid cases, 64% of Pentaray cases, 92% Duodeca cases and 33% of RF mapping cases (p=0.025) with a similar trend observed with entrainment and pace mapping (HD Grid 58%; Pentaray 45%, Duodeca 83%, RF 17%; p=0.039). A greater number of VTs were mapped with multipolar catheters and thereafter ablated. Complete elimination of clinical and non-clinical VTs which was achieved in 79% of HD Grid cases, 55% of Pentaray cases, 83% Duodeca and 33% of RF mapping cases (p=0.04). Survival curve analysis showed a significantly higher end-point free survival for both ATP and appropriate shock in the HD Grid group compared to other mapping catheters. With a mean follow-up of 372 ± 234 days, 97% and 100% of HD Grid patients were free of recurrent ATP and shock, respectively, compared to 64% and 82% in the Pentaray group; 58% and 83% in the Duodeca group; 33% and 33% in the RF mapping group.

Conclusions: A wide variety of mapping catheters can be used with an armamentarium of strategies to define VT ablation targets. We have shown a step-wise improvement in survival free from ICD therapies as the density of mapping capability increases. By using high density mapping catheters and combining complementary mapping strategies in a strict procedural workflow, long-term clinical outcomes are improved. 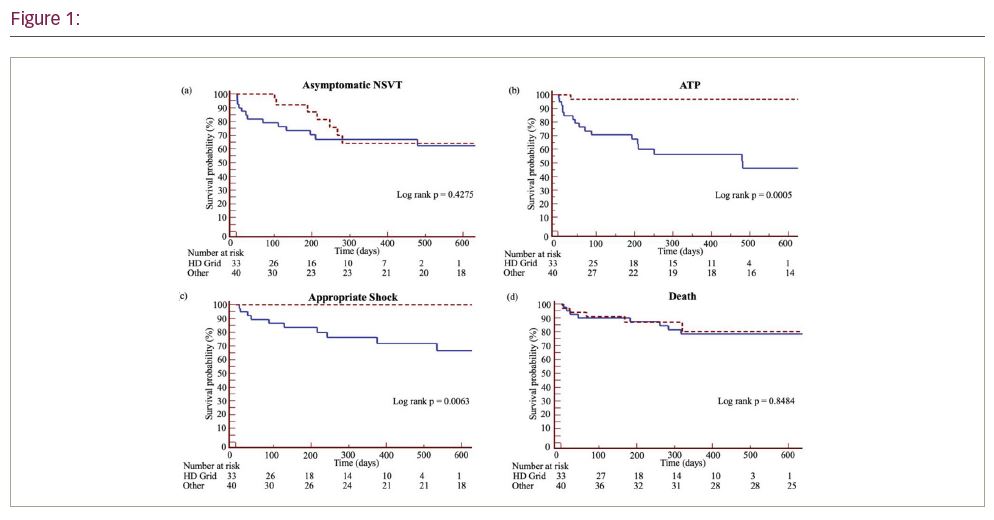