Introduction: Cardiac resynchronisation therapy (CRT) is used in select heart failure patients1,2 to improve quality of life and mortality.3-5 Some patients are reported to experience no benefit; so called ‘non-responders’. This retrospective service evaluation aimed to determine the CRT response rate at Rotherham General Hospital (RGH), exploring which variables may be influencing response.

Methods: Medical records of CRT patients at RGH were reviewed. The following departmental definition of response was used: alive at 6-month follow-up with 2/3 of the following: ≥1 improvement in New York Heart Association (NYHA) class; ≥10% improvement in 6 Minute Walk Test; ≥15-point improvement in Minnesota Living with Heart Failure Questionnaire. Response was assessed for association with pre-defined variables.

Results: Of 69 patients included, response was 64%. Univariate logistic regression indicates that baseline NYHA class is the only significant predictor of response (χ2(1df, n=69) =7.288, p=0.007, OR=0.245, 95%CI [0.085, 0.709]). Patients with baseline NYHA III class were more likely to respond than NYHA II. Although no other variables showed statistically significant association with response, there was a trend towards higher response in females and with lateral LV lead position. There was also a trend towards a greater reduction in QRS duration in responders.

Discussion: CRT response at RGH is comparable to response rates reported in literature which used similar definitions of response.6,7 More severe heart failure at baseline was a significant predictor of response. Evidence of the benefits of CRT in NYHA III/IV patients in terms of functional improvements and symptom relief at 6-months is consistent.3,4 Based on data from larger trials, reported benefits of CRT in NYHA I/II patients appear to be more related to reduced hospitalisation and death over longer timeframes.5,8 Consideration is being made to adjust the departmental definition of response to incorporate a 3rd group of ‘non-progressors’. This may be a more accurate representation of CRT benefits in patients that have disease status halted or slowed, but not reversed.

Of those variables which did display a trend towards a positive association with response, the lack of statistical significance may be attributable to the relatively small sample size of this project. This was namely female sex, lateral LV lead position and greater reduction in QRS duration. These three variables have previously been reported by others to be associated with a positive response to CRT.6,9,10 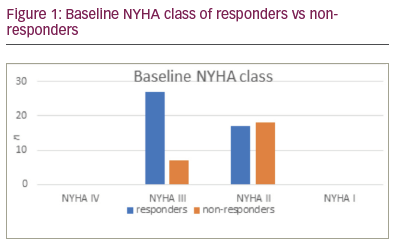