Introduction: Symptomatic cardiac involvement occurs in ~5% of patients with sarcoidosis, with up to ~25% occurrence seen in autopsy studies. Ventricular arrhythmias and cardiac arrest may be the first presenting event in otherwise asymptomatic patients. Implantable cardioverter-defibrillators (ICDs) are frequently deployed, but only a weak evidence base exists.

Methods: We retrospectively reviewed the indication for ICD implantation in patients known to the Cardiac Sarcoid Service at Barts Heart Centre, the frequency of upgrade from permanent pacemaker (PPM) and examined the rates of appropriate and inappropriate shocks.

A total of 154 patient years with ICDs in situ were recorded for these 27 patients. Six patients have received appropriate shocks, five of these patients had secondary prevention ICDs. No patients received inappropriate shocks. Three of those with ICDs who received shocks had a left ventricular ejection fraction (LVEF) of <35%, while 3 had a LVEF >50%. Of appropriate shocks delivered, 50% of those were for ventricular tachycardia and 50% were for ventricular fibrillation. In the single patient who had a shock from a primary prevention ICD, the device was implanted for a pacing indication and deteriorating LV function, with an ejection fraction of <25% at the time of shock which occurred 5 years after implantation. 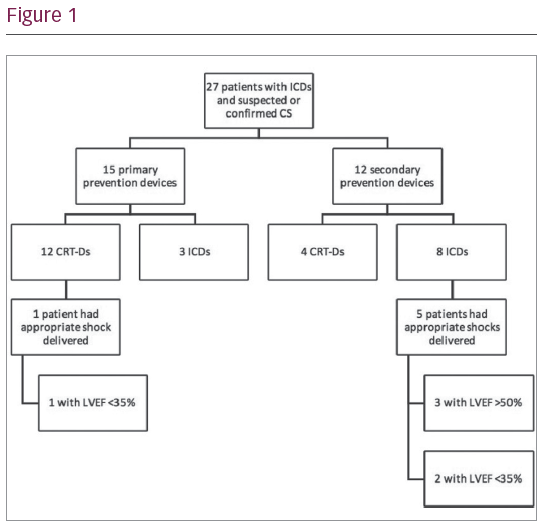 Conclusion: In this group of cardiac sarcoid patients with ICDs in situ, no shocks were delivered in patients with primary prevention devices and mild/moderately impaired or good LV function. We will continue to collect this data from our Cardiac Sarcoid Service to provide greater clarity as to the use of ICDs in this population.