Purpose: In April 2017, the British Heart Rhythm Society (BHRS) published standards for implantation and follow up (FU) of cardiac rhythm devices. This document highlights that permanent pacemakers should be implanted within 24 hours of bradycardic emergencies.

In 2014 the London Clinical Senate endorsed the arrhythmia triage pathway. This pathway allows London ambulance service (LAS) to triage high risk patients and take them directly to an arrhythmia centre. This included Barts Heart Centre (BHC) which provides emergency 24/7 pacemaker and ablation procedures for the central and East London area. We audited our emergency pacemaker implants for the year 2017 to determine areas of service improvement.

Methods: We conducted a retrospective audit, including all patients who underwent an “emergency” permanent pacemaker. We excluded patients who had incomplete data and patients needing pacing as a result of a complication to a concurrent procedure. For comparison a control group was collected of elective permanent pacemaker implants at BHC in 2017. We systematically reviewed each patient’s record to assess:

Conclusion: Our results show that emergency implants during 2017 at the BHC were 88.8% BHRS compliant. Emergency implants carried a 4x increase of complications than elective pacemakers but procedure time was the same. Only 1 patient required an upgrade procedure after initial implant, suggesting that it was possible to appropriately select devices even with paramedic triage emergency pathways. 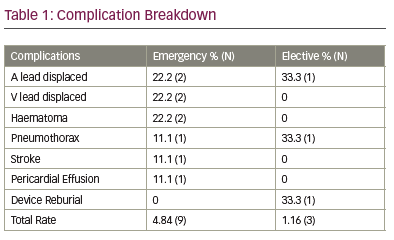