Introduction: The emergence of the subcutaneous implantable cardiac defibrillator (SICD), approved by the FDA in 2012, has been a major breakthrough in cardiac rhythm management. The foremost benefit concerns the lack of necessity to place a lead through the central venous system into the heart, thus avoiding the potential complications of vascular obstruction, thrombosis, infection, cardiac perforation or pneumothorax. This comes at the expense of bradycardia and
anti-tachycardia pacing capability.

SICDs have been implanted at the Royal Papworth Hospital since January 2010. We sought to evaluate the trend of appropriate and inappropriate therapy delivery and device-related complications over time.

Method: Cases were identified through retrospective analysis of institutional databases. Patients’ clinical characteristics, procedural details and complications were recorded. Therapies during
follow-up were classified as appropriate or inappropriate based upon contemporaneous device interrogation. Results were stratified into tertiles by time of implant to compare trends over time.
Continuous variables are presented as mean ± standard deviation, and categorical data as counts or percentages. Analysis and comparisons of continuous data were performed using Student’s t-tests and analysis of variance (ANOVA), whilst categorical data were compared using the χ2 test. A two-tailed probability level of <0.05 was considered significant.

There was no significant difference in age, sex, proportion of primary and secondary prevention indications or procedure duration between tertiles.

Conclusion: With evolving improvements in implantation techniques and operator experience the rate of undesirable sequelae resulting from SICD insertion has gradually diminished over time. The overall rate of complications and inappropriate therapies at our centre compares favourably with previously published multi-centre registry data. 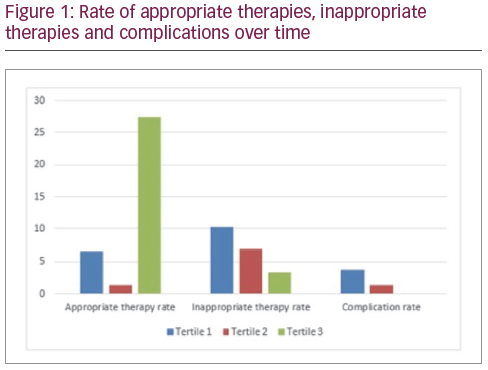