Methods: Data was collected from all patients who underwent first time ablation for PeAF at Freeman Hospital in Newcastle upon Tyne and Liverpool Heart and Chest Hospital between August 2016 and June 2018 with a minimum of 6 months of follow-up data. The use of combined AcQMap/Cryoballoon, Cryoballoon alone or Carto-guided PVI (with or without additional linear lesions) was as per operator preference. The primary endpoint was AF/atrial tachycardia (AT) recurrence after a 3-month blanking period.

Results: Two-hundred-and-seventeen patients (79% male, mean age 62 ± 10 years, 19.9% with severe LA dilatation, mean CHA2DS2-VASc score 1.48 ± 1.22) were included for analysis. Mean follow-up was 350 ± 122 days and was similar between the 3 groups, as were patient characteristics. Outcomes from the three strategies are shown in Table 1. 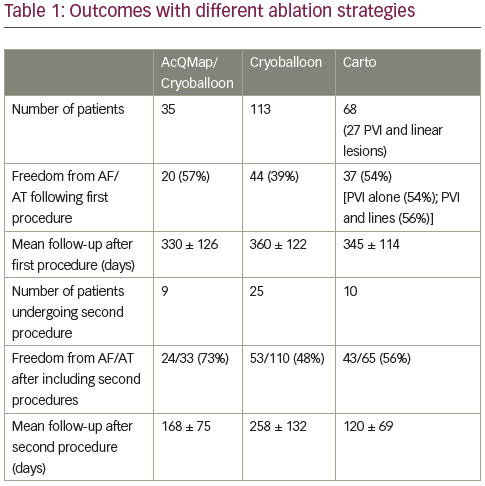 Conclusion: Our two-centre real-world observational study showed similar first procedure outcomes with AcQMap/Cryoballoon and Carto-guided PVI ± substrate modification, with a strong trend towards inferior outcomes for Cryoballoon alone and significantly lower success rates for this technology after including redo procedures. Recurrence following AcQMap was most commonly AT, which may have contributed to improved outcomes being achieved after including redo procedures. Randomised controlled trials will be required to evaluate the efficacy of this costlier combined initial procedure against existing treatment modalities.