Papillary muscles are increasingly being recognised as a source of premature ventricular complexes (PVCs) and ventricular arrhythmias (VAs). These VAs, though amenable to catheter ablation, present unique challenges to an electrophysiologist. The endocavitary location, varied anatomy and anisotropic conduction of impulses within the papillary muscle are responsible for the characteristic electrophysiological observations – pleomorphic PVCs on electrocardiogram, abnormal potentials during mapping of PVCs and difficulties in ablation. Papillary muscles are also involved in malignant mitral valve prolapse syndromes, post-infarct VAs and triggers for PVC-induced ventricular fibrillation.

Activation and preferential conduction within the papillary muscles 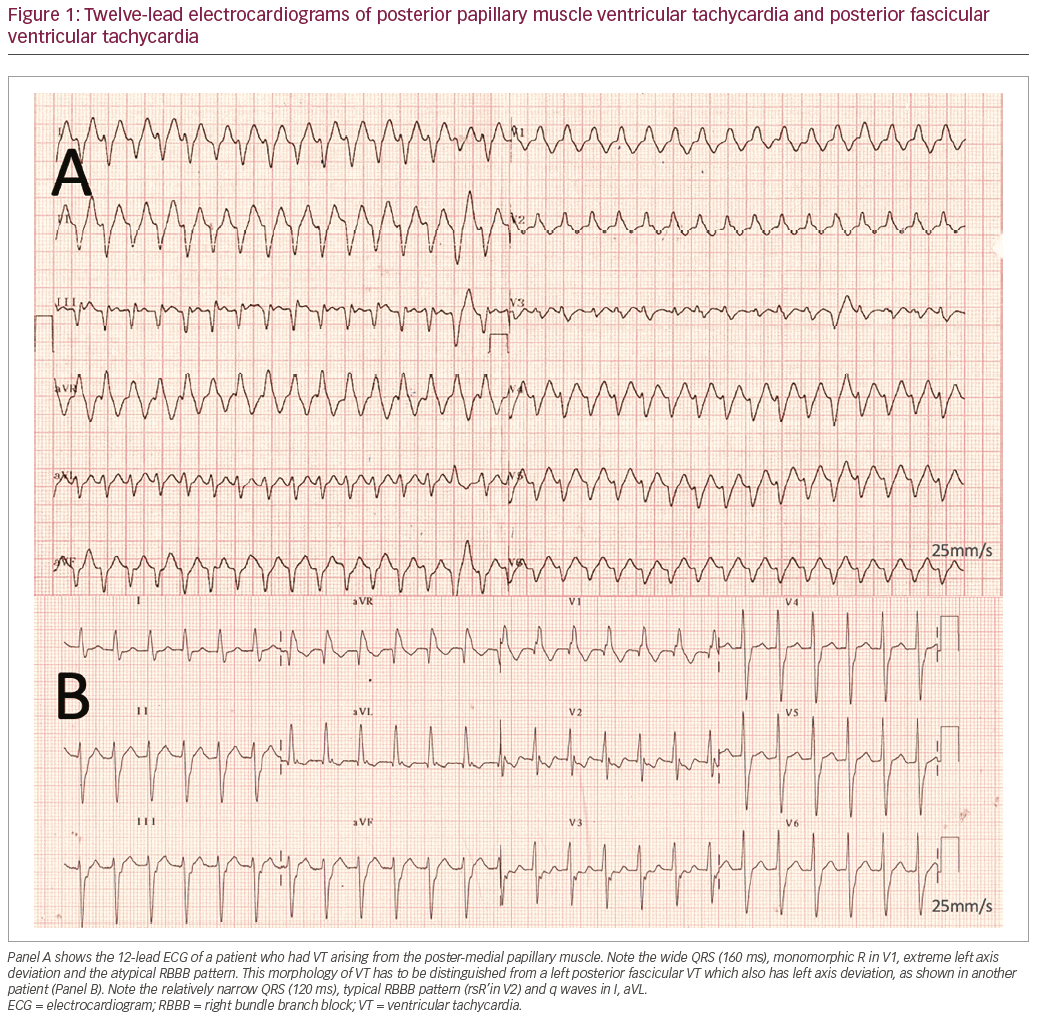 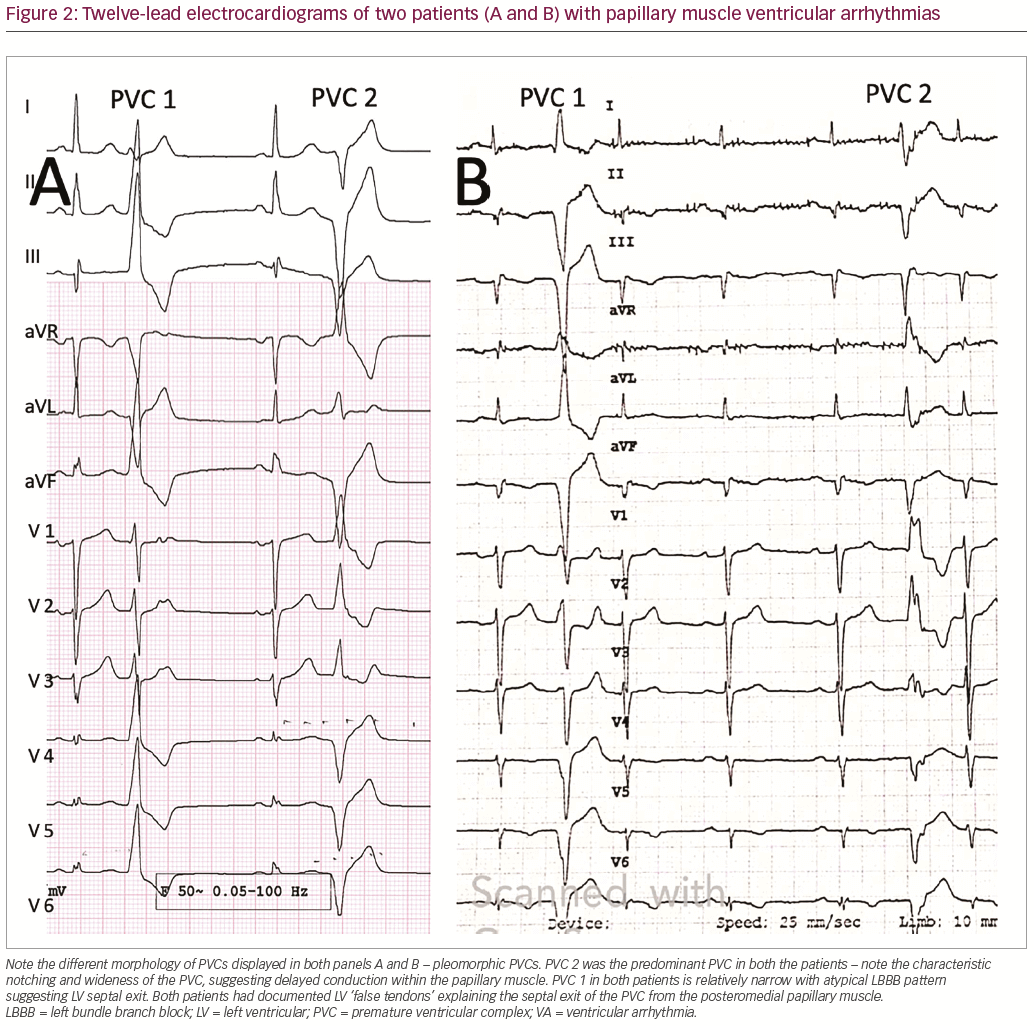 Table 1 enlists studies and their pertinent findings with respect to electrophysiological characteristics of papillary muscle arrhythmias.2,10,11,13–5,21–30 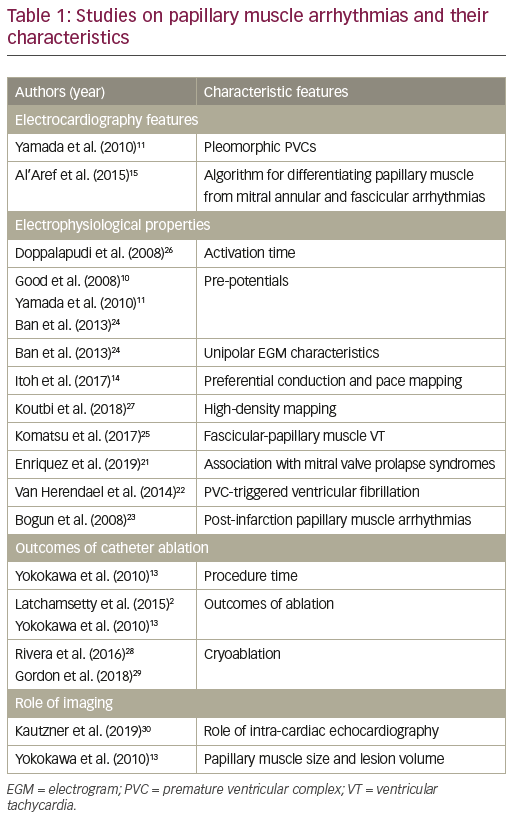 Mapping for the earliest activation signals is the cornerstone for successful ablation of the papillary muscle VAs. Earliest activation signals of 34 ± 15 ms have shown to be effective for successful ablations.10 Recognition of ‘pre-potentials’ is an essential part of activation mapping. There have been frequent observations in the past that pre-potentials could be noted at the sites of successful ablation of papillary muscle VAs. These pre-potentials may be seen in 30–56% cases,10,26,31 and if noted, could predict successful outcomes of ablation (Figure 3).13 The genesis of these pre-potentials has been much debated. There have been three types of pre-potentials described: 1. high-frequency (sharp) potentials, 2. high amplitude low-frequency (rounded) potentials, and 3. low amplitude low-frequency (rounded) potentials. The high-frequency potentials are the Purkinje potentials and, when also found during the sinus rhythm, suggest a superficial origin of the VAs from the Purkinje–myocardial interface. These Purkinje potentials could be observed in up to 45% cases.10 When separated from the ventricular potential by an iso-electric line, these Purkinje potentials may suggest a delayed exit into the myocardium due to slow conduction.32 The low-frequency potentials are likely to be of myocardial origin (myo-potentials). These myo-potentials should suggest deeper origin of the VAs from the papillary muscle. The amplitude of these potentials should be able to suggest near-field (high amplitude) and the far-field (low amplitude). The far-field potentials suggest deep intra-mural origin or an epicardial exit of the VAs. 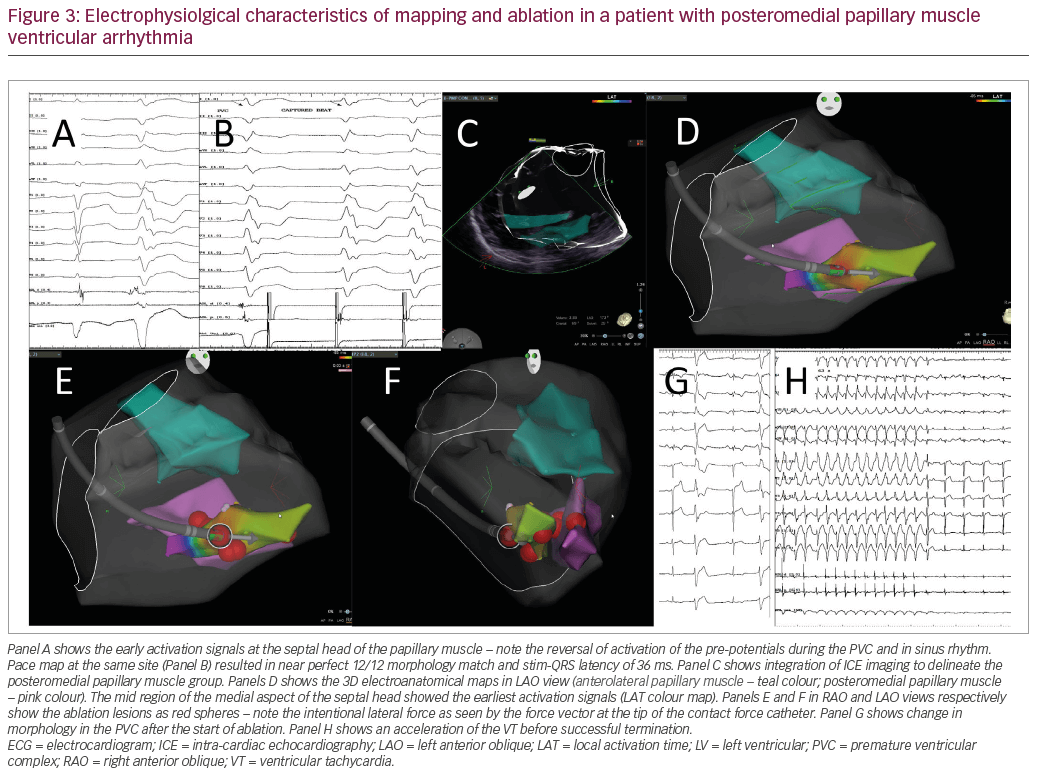 Detection of abnormal potentials like late systolic or early/late diastolic potentials at sites of early activation during sinus rhythm or during PVCs should suggest an abnormal substrate. The diastolic potentials found on the papillary muscles may serve as targets for ablation in patients with FVT. Mapping with multi-electrode catheters has not been much studied and it remains to be seen if they have better sensitivity than mapping with conventional quadripolar catheters in picking up the pre-potentials.27 Unipolar mapping is important to understand and differentiate the near-field and far-field early potentials.33 Presence of q waves coinciding with the onset of the early pre-potentials should suggest the subjacent source of the VAs to the mapping catheter. The slow downstroke of >50 ms of the q wave of the unipolar electrogram has been shown to predict success; however, this was studied only in a small cohort of patients.24

Pace mapping at the papillary muscles

Pace mapping at exit sites may not be representative of the site of origin. During pace mapping, the morphology of the QRS on the 12-lead ECG can vary depending on the pacing output, the amount of myocardium captured, and underlying scar, if any. Pace mapping should be at an output just above threshold to ensure capture of only the local myocardium. The 12-lead pace map should be interpreted with caution keeping in mind the property of preferential conduction
of the papillary muscle VAs.13,26 A good pace map, when associated with early activation signals, can define success in nearly 70% cases (Figure 3).34,35 However, a perfect pace map may be achieved only in 30–60% cases.10,34 Nevertheless, pace mapping can be a strategy for papillary muscle VA ablation and is especially useful when there are no inducible VAs or in haemodynamically unstable VAs precluding an activation map and when ablation at earliest activation sites fail. Good pace maps can be obtained at multiple sites remote to the earliest activation sites and ablation at these sites might be successful when VAs are not inducible.35

Understanding of the stimulus-QRS duration (latency) of the paced complex is important to understand the preferential conduction observed in papillary muscle VAs (Figures 3 and 4). It is possible that the paced QRS matches the morphology of the PVC, yet the site of pacing might be distal to the site of origin. Therefore, pace mapping of the papillary muscle VAs should consider not only the morphology match but also the latency of capture as it has been shown that ablation at these sites is successful when previous attempts have failed at the earliest activation sites.35 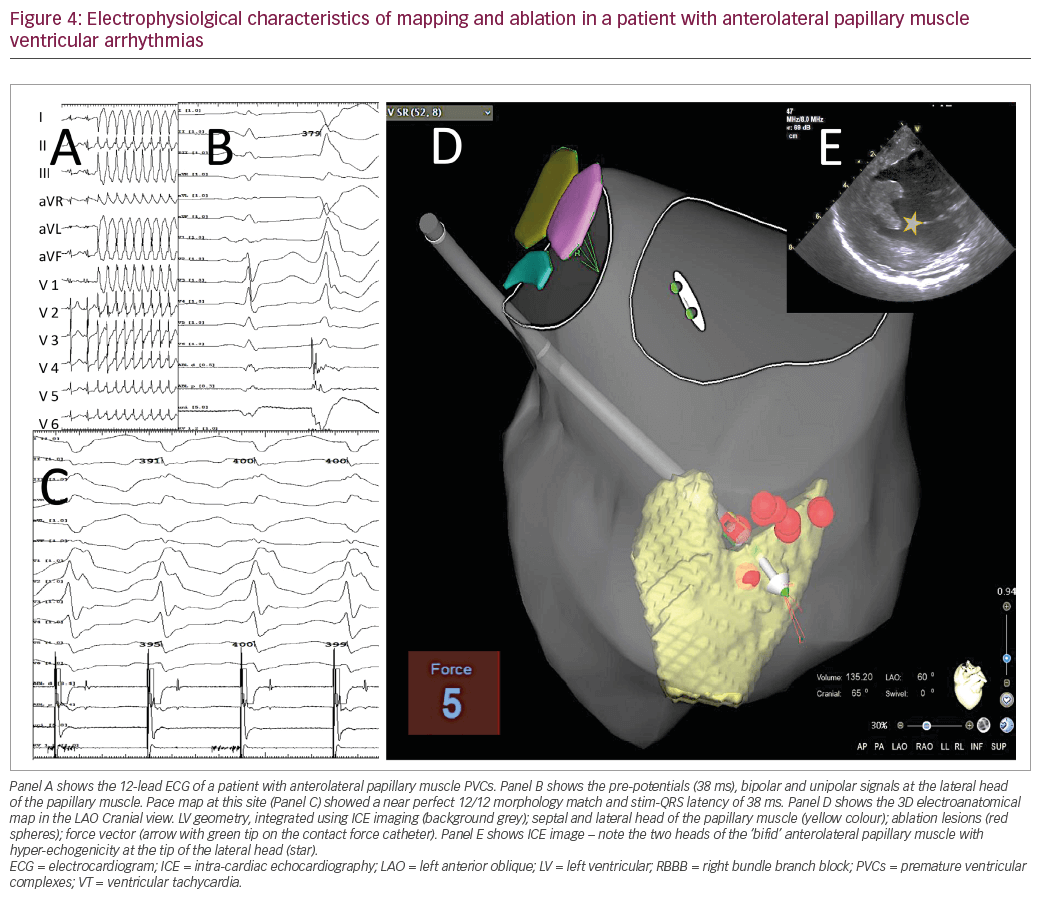 The acute success rate of ablation varies from 60–100%, but the long-term success rate of these arrhythmias was found to be less promising (60%), as shown in a large multicentre study.2 The recurrence rates with respect to anterolateral and posteromedial papillary muscles has been noted to be 71% and 50%, respectively.34,36 The higher recurrence rates observed in the ablation of papillary muscle VAs are because the papillary muscles are very thick structures and arrhythmic foci of papillary muscle VAs are more often deeper from the endocardium. The depth of the radiofrequency lesion may not encompass the deep focus. Also, the close proximity of the heads of the papillary muscles and their vigorous contraction during systole can pose difficulties during catheter manipulation due to unstable catheter positions. Considering the deeper origin of the papillary muscle VAs, the choice of catheter is always an irrigation catheter to create a deeper and wider lesion. Ablation with conventional non-irrigation catheters has, in fact, been shown to have recurrences.26 Establishing contact with an endocavitary structure like the papillary muscle has been recognised as the most challenging aspect of the ablation. Therefore, use of contact-force catheters and adjunct imaging guidance like intra-cardiac echocardiography (ICE) can aid in improving success rates.37

Cryoablation is now established as an alternate modality in papillary muscle VA ablation especially when catheter contact is an issue or in cases with recurrences with radiofrequency ablation (RFA).28 The advantage of cryoablation is the catheter-tissue adherence at extremely
low temperatures increasing likelihood of a stable catheter position. The cryoablation catheter can also target multiple different surfaces of the papillary muscle. Acute success has been reported to be 100%.36 Excellent success rates (93.8%) have also been reported in cases of
failed papillary muscle VA ablation with RFA.29 The disadvantages of cryoablation are reduced manoeuverability due to bulky catheters, reduced lesion depth and inability to accurately project the catheter tip onto the electroanatomic map.

ICE imaging during ablation of papillary muscle PVCs enables visualisation of the head, body and base of the papillary muscles. More importantly ICE helps in establishing contact of the ablation catheter during RFA. ICE has been extensively used in ablation and has become the standard-of-care for ablation of VAs from endocavitary structures like the papillary muscles.30 Moreover, real-time integration of ICE imaging with 3D electro-anatomical mapping enables precise delineation of the geometry of the papillary muscles in relation to the cavity (Figures 3 and 4).37 ICE can also identify areas of high echogenicity which may correspond to areas of low bipolar voltage and scar.21,38 Ablation at the parietal region of the RV infundibular muscles have high recurrence rates and is technically challenging due to the location and ICE can play a crucial role in establishing contact with these structures.39 The 3D electro-anatomical mapping systems have advanced to enable integration of ICE, computed tomography (CT) and magnetic resonance imaging (MRI) to aid precise mapping of papillary muscles. Additionally, advanced tools such as automated pace mapping modules and integration of ICE, CT and MRI algorithms within the 3D electro-anatomical mapping systems can help in achieving better success rates during ablation of these complex structures in both the LV and the RV.6,40,41 A larger arrhythmogenic mass of the papillary muscles detected on cardiac MRI can also correlate with poorer outcomes from RFA.13

Morphology change can be observed during ablation of papillary muscle VAs in 47% cases.34 A morphology change observed during or after delivery of RFA burns suggests a shift in the preferential conduction along the length of the papillary muscle and exit of the PVC from a different site at the LV free wall, though the source continues to remain the same (Figure 3). The morphology of the newer PVC should be studied, and activation map has to be repeated for the same. More often, this may necessitate ablation on both sides of the papillary muscle to get rid of the PVCs.5,34 In patients with FVTs, a change in the 12-lead morphology of the tachycardia upon ablation at the routine target sites of ablation such as the posterior/anterior fascicular sites, along with a reproducible initiation of the tachycardia, should alert the operator to look for diastolic potentials in the papillary muscles as these structures are known to be involved in the circuits of FVTs. Successful ablation of these abnormal potentials may eliminate these tachycardias.25 Acceleration of PVCs or induction of VT is another frequently observed characteristic during the ablation of papillary muscle VAs.

This article is freely accessible at touchCARDIO.com. © Touch Medical Media 2020.

Dr Pathak is supported by an early career fellowship from the National Health and Medical Research Council of Australia.