His bundle pacing is steadily gaining interest for providing a more physiological alternative compared to right ventricular pacing. It may also correct intraventricular conduction delay in a subset of patients, thereby providing an alternative to biventricular pacing for treating heart failure. The advent of new tools has greatly facilitated implantation, which has become routine in a growing number of centres. This article overviews this pacing modality, discusses current issues and points to future directions.

It is well established that chronic right ventricular apical pacing may have an adverse effect on left ventricular systolic function,1,2 leading, in the long term, to adverse clinical outcomes such as heart failure,3 atrial fibrillation4,5 and even death.6 As an alternative to right ventricular apical pacing, the interventricular septum or right ventricular outflow tract have been proposed to avoid these adverse effects, but results have been equivocal.7,8 In the quest for more physiological alternatives, His bundle pacing (HBP) was first performed by Deshmukh et al. in 2000.9 This technique has the advantage of avoiding the electrical (and thereby mechanical) dyssynchrony induced by myocardial pacing by recruiting the intrinsic conduction tissue to activate the ventricles, resulting in a narrow QRS complex. Furthermore, in 1977 Narula10 showed that pacing of the His bundle can correct bundle branch block (BBB) in a subset of patients, implying a proximal site of conduction disturbance with longitudinal dissociation within the His bundle. HBP may therefore also be used in lieu of cardiac resynchronisation therapy (CRT); for example, as rescue therapy in patients with failed coronary sinus lead implantation.

Despite its virtues, the technique was not readily adopted because of the complexity of the procedure, which required mapping of the His bundle using a diagnostic electrophysiology catheter and positioning a standard pacing lead with a manually curved stylet. Procedures lasted hours and resulted in high capture thresholds. The advent of a steerable sheath to deliver a 4.1 F lumenless lead, the SelectSecure™ 3830 Lead (Medtronic, Minneapolis, MN, USA), facilitated the procedure, but capture thresholds remained high (on average 2.3 ± 1.0 V/0.5 ms).1 More recently, a sheath with a fixed curve specifically designed for locating the His bundle (Medtronic SelectSite™ C315HIS Delivery Catheter; Figure 1) has further facilitated the procedure by obviating the need of a diagnostic catheter and with improved thresholds (mean 1.35 ± 0.9 V/0.5 ms).1 A deflectable catheter with a posterior curve (SelectSite™ C304-HIS Deflectable Catheter System) has very recently been introduced, which is likely to further facilitate implantation (Figure 1). With experience, operators become more confident to strive for better thresholds and reposition leads if necessary. Delivery catheters to accommodate standard 6F stylet-driven leads with extendible screws are also being developed by several manufacturers. An example of His lead position is shown in Figure 2.

The His bundle is usually mapped in the right anterior oblique view directly with the pacing lead, using unipolar signals (as the ring electrode is usually covered by the sheath). If no His potential is visualised, pacemapping may be used to locate the target site. Mapping is facilitated by using minimally filtered signals from an electrophysiology bay (which show the presence of a current of injury of the His upon fixation and also simultaneous 12-lead electrocardiograms [ECGs]), but a pulse sense analyser also may be used at 50 mm/s sweep speed and 0.05 mV/mm scale (the Abbott programmer allows display of ‘unfiltered’ signals and has a large display). The lead is fixated by rotating the lead body four to six times. It is of paramount importance to carefully confirm the presence of His capture by visualising beat-to-beat changes in QRS morphology on a 12-lead ECG with decrementing pacing output. The QRS may suddenly narrow (indicating loss of myocardial capture with selective His capture) or widen (implying transition from non-selective His capture to myocardial capture only; Figure 3). Absence of QRS transition usually indicates para-Hisian pacing with myocardial capture only. 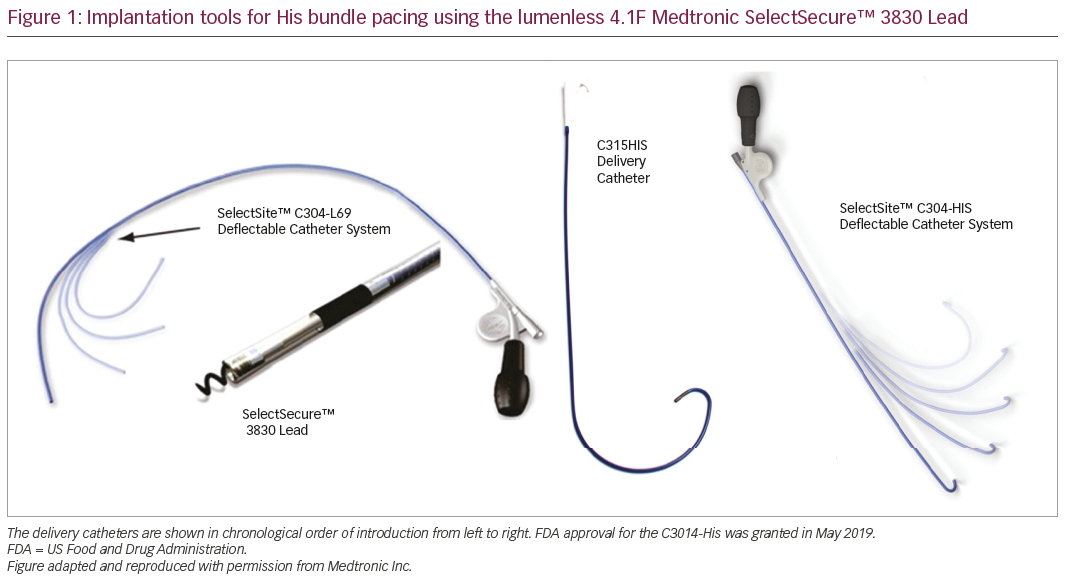 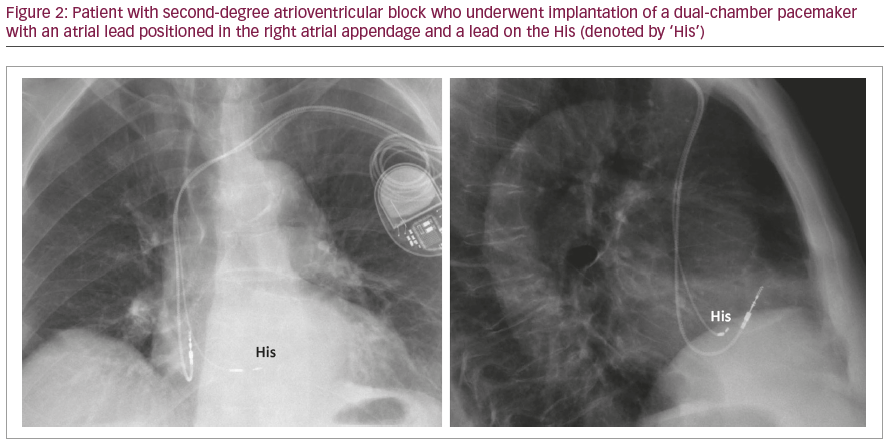 In a recent international registry, implant success was 87% after a learning curve of 40 cases, although the definition of success was not uniform across the centres.13 Implantation tools are evolving and will no doubt facilitate the procedure (as was the case for coronary sinus lead implantation in the past).

His bundle pacing in lieu of right ventricular pacing

It is interesting to note that even patients with infra-nodal block have successful HBP (in 76% of cases compared to 93% in cases with nodal block).17 This implies that the site of block is most often proximal, within the His bundle itself. 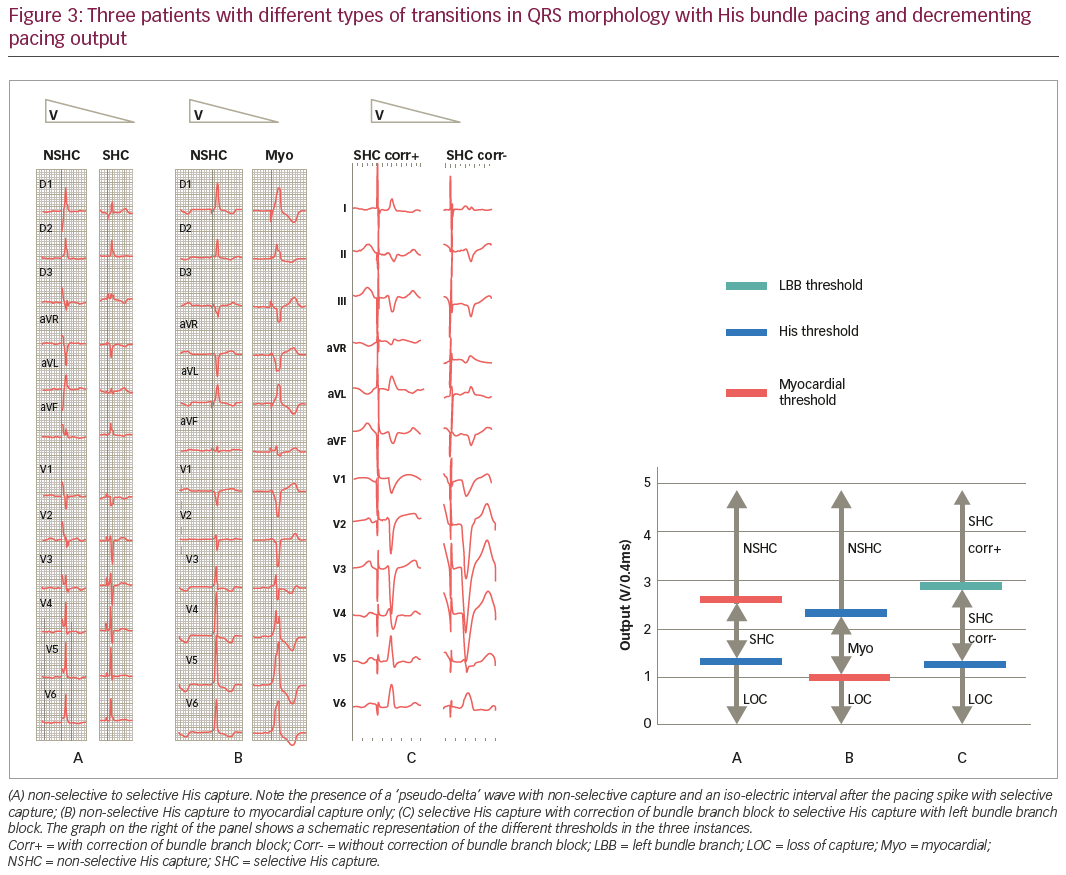 His bundle pacing in lieu of biventricular pacing

In 1977, Narula10 reported, for the first time, the correction of left BBB by temporary His pacing, with correction in 25/80 (31%) patients. Overall, it has been reported that approximately 70–90% of patients with BBB have QRS narrowing with HBP.18–23 Using ECG imaging, Arnold et al.24 reported that HBP resulted in greater electrical synchrony and acute haemodynamic improvement than biventricular (BiV) pacing. HBP was first described as an alternative to BiV pacing for treating heart failure in a patient with dilated cardiomyopathy by Barba-Pichardo et al. in 2006.25 In a multicentre observational series of 95 patients implanted with HBP in lieu of BiV pacing, a significant improvement in left ventricular ejection fraction (LVEF, on average from 30% to 44%; p=0.001) and in New York Heart Association (NYHA) functional class was reported over follow-up. In a series of 37 patients with right BBB (who are known to respond poorly to BiV pacing), approximately 70% of the patients showed clinical (improvement in NYHA class) or echographic response (increase in LVEF ≥5%).26 A randomised study evaluating HBP versus BiV pacing was reported by Lustgarten et al.19 in 12 patients. After crossover periods of 6 months, there were similar improvements in LVEF and clinical response. The His-Sync pilot study randomised 41 patients to either HBP or BiV pacing.27,28 The crossover rates in both groups were very high (48% and 26%, respectively, mostly due to insufficient QRS narrowing). After a mean of 12 months’ follow-up, HBP showed greater QRS narrowing and a trend in greater improvement in LVEF compared to BiV pacing, both by intention to treat27 as well as on-treatment28 analyses. A summary of published and ongoing randomised trials is shown in Table 1.15,16,19,27−9 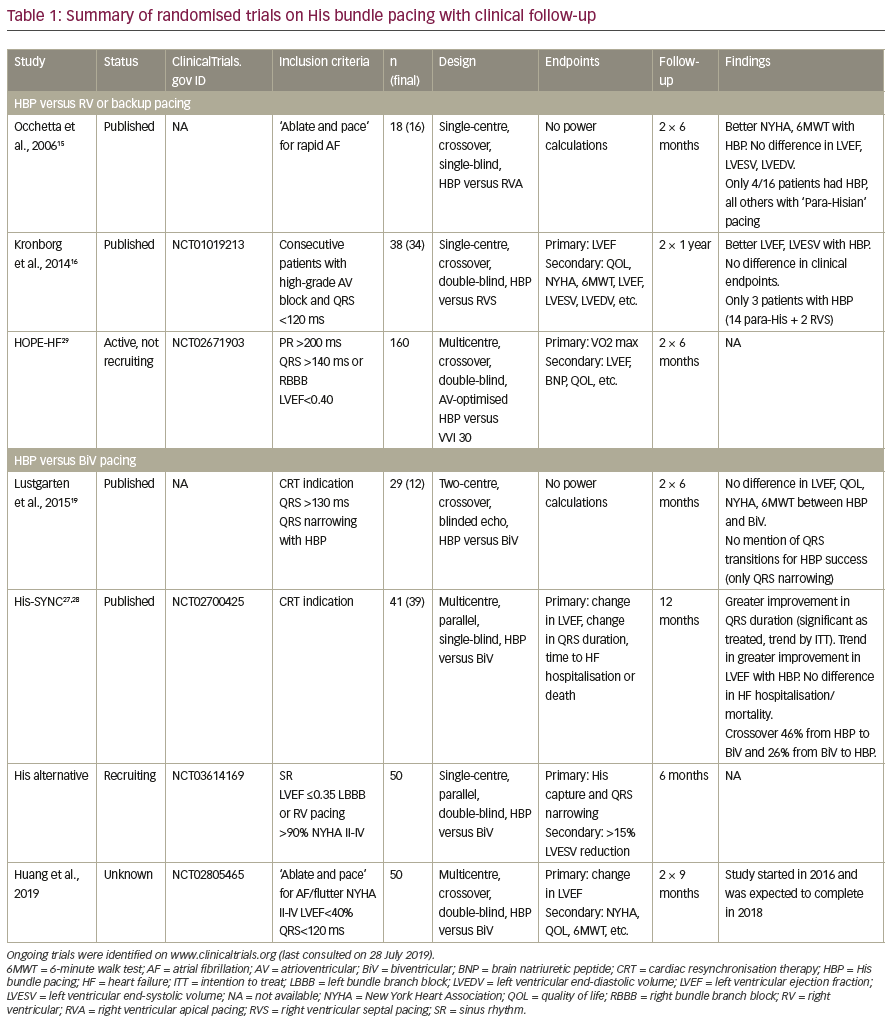 In the 2018 American College of Cardiology/American Heart Association/Heart Rhythm Society guidelines on the evaluation of patients with bradycardia and cardiac conduction delay,30 HBP (or BiV pacing) is a class IIa indication over right ventricular pacing in patients who have an LVEF 36–50% and who are expected to be paced in the ventricle during >40% of the time. HBP is a class IIb indication in patients who have atrioventricular block at the nodal level (as opposed to the infra-nodal level) and who have an indication for permanent pacing, in order to maintain physiological ventricular activation.

Other possible indications, which are currently not in guidelines, are patients who require an ‘ablate and pace’ strategy for rapidly-conducted atrial arrhythmias, although ablation of the atrioventricular node may be challenging to avoid compromising function of the His lead.31 In patients with failed coronary sinus lead implantation, or in case of non-response to BiV pacing, HBP may be an alternative. Another consideration is in patients with chronic atrial fibrillation who have an indication for CRT. A His lead may be connected to the atrial port (instead of plugging it), which provides the option of delivering either HBP, BiV pacing, or His-optimised CRT (HOT-CRT; i.e. HBP in conjunction with right ventricular/left ventricular/BiV pacing).32

Issues with His bundle pacing

The learning curve has been shown to be approximately 40 cases,13 and may be more for device specialists who do not perform electrophysiological studies and are not accustomed to locating the His or interpreting endocavitary signals. If an electrophysiological bay is not available, a pulse sense analyser needs to be used, which is sub-optimal. A 12-lead ECG is mandatory for analysing transitions in QRS morphology with decrementing output and confirming His capture, which may sometimes be challenging and time-consuming (programmed stimulation33 or narrowing of pulse duration34 may help in determining whether there is non-selective His capture or myocardial capture only). Thresholds are still higher than with standard ventricular pacing, compromising battery longevity.35 Increases in His thresholds and the requirement for lead revision in the mid-term is relatively high at around 7%,13,23,35,36 and may be even more unpredictable than with right ventricular pacing. In rare instances at implantation, repositioning may be difficult due to the inability to free the lead from cardiac tissue (either from the fibrous skeleton or the tricuspid valve). There is limited experience with lead extraction, but this was possible in 29/30 patients implanted with a Medtronic 3830 lead with a mean dwell time of about 2 years (and a maximum of 6 years).37 Extraction tools were seldom necessary. As the 3830 leads do not have a lumen, locking stylets cannot be deployed and snares or lead extenders need to be used if extraction tools are required.

There is some debate as to the necessity of a backup ventricular lead. Arguments in favour of their use are:

The main argument against the use of a backup lead is extra cost (not only for an additional lead, but also for a generator with an additional channel). Currently, the US Food and Drug Administration (FDA) only approves the 3830 lead for HBP when it is connected to the ventricular port of single- and dual-chamber pacemakers, and magnetic resonance imaging conditionality is also only granted in this setting (although ‘off label’ configurations are used in clinical practice). Timing delays and refractory periods of current devices are also not configured for connecting His leads to the atrial or left ventricular ports, which makes programming quite challenging in these instances. This aspect is covered in detail elsewhere in recent articles.38,39

The advent of new delivery tools will no doubt facilitate implantation. Dedicated leads (e.g. with a longer helix) may also facilitate implantation and serve to lower thresholds. Devices that have pre-set parameters adapted for HBP are likely to be introduced to facilitate programming with different lead connection configurations. Hopefully, algorithms will be developed that will be capable of accurately measuring His capture thresholds in order to adapt pacing output, to preserve battery life longevity and to ensure patient safety. There is growing interest in targeting the left bundle branch area by implanting the lead through the interventricular septum, which may achieve lower capture thresholds and which is also likely to facilitate atrioventricular node ablation if required.40

We are currently experiencing an exciting era with the advent of HBP, which allows us to offer true physiological pacing to our patients. The field is evolving rapidly, but more evidence from randomised controlled trials is required before it can replace right ventricular pacing (and even more so, BiV pacing) in routine practise. Furthermore, tools and technology need to evolve to facilitate adoption. As expertise with implantation is becoming more widespread, we are soon likely to witness the launching of large multicentre studies, which will hopefully provide the evidence we need to dispel any doubts regarding the benefit of this therapy.

This study involves a review of the literature and did not involve any studies with human or animal subjects performed by the author.

The named author meets the International Committee of Medical Journal Editors (ICMJE) criteria for authorship of this manuscript, takes responsibility for the integrity of the work as a whole, and has given final approval for the version to be published.