Hypertension is a common health problem, which leads to a substantial mortality and morbidity burden, globally. The management of patients with high-risk and treatment-resistant hypertension remains a major clinical challenge to the treating physician. Renal denervation (RD) is an emerging technique, comprising modification of the renal sympathetic nerve supply which courses around the renal arteries. Endovascular access is obtained to the renal arteries, followed by delivery of heat energy to the peri-renal sympathetic nerves. This leads to the reduction of blood pressure with or without the addition of anti-hypertensive pharmacotherapy. Earlier trials led to clinical equipoise, but more recent trials (e.g. SPYRAL HTN-OFF MED, SPYRAL HTN-ON MED and RADIANCE-HTN SOLO), which were designed to overcome the limitations of the initial studies, have provided support for the efficacy of RD in hypertension management. Evidence (from randomised, non-randomised, sham-controlled and non-sham-controlled trials) for the use of RD in the treatment of hypertension is reviewed in this article. Finally, the current clinical role, gaps in evidence, and the expected future evolution of RD are discussed.

Hypertension is a global health problem, with an estimated 1.13 billion individuals affected.1 Patients with hypertension, especially when resistant to conventional therapy, are at high risk of sequelae, e.g., ischaemic heart disease, haemorrhagic and ischaemic stroke, cardiac failure, peripheral vascular disease and end-stage renal disease.2 Renal denervation (RD) is an emerging treatment modality which allows blood pressure reduction by modification of the renal sympathetic nerve supply (Figure 1). Increased sympathetic outflow to the kidneys activates the renin-angiotensin-aldosterone system, which in turn leads to renal tubular sodium and water reabsorption.3,4 Angiotensin II also causes systemic vasoconstriction by stimulation of type 1 angiotensin receptors. Stimulation of the renal sympathetic nervous system increases blood pressure and is an attractive target for antihypertensive therapy. Historically, surgical splanchnicectomy was performed for the treatment of hypertension but was abandoned with the advent of modern pharmacotherapies due to the unfavourable effects of the procedure, e.g., erectile dysfunction, urinary incontinence and orthostatic hypotension.5 In the modern era, the renal arteries can be accessed endovascularly via the femoral, brachial or radial arteries, allowing for radiofrequency energy to be delivered to the renal sympathetic nerves which course around the renal arteries.6 Endovascular RD is a safe procedure, with only isolated reports of access site complications and vessel dissection.7 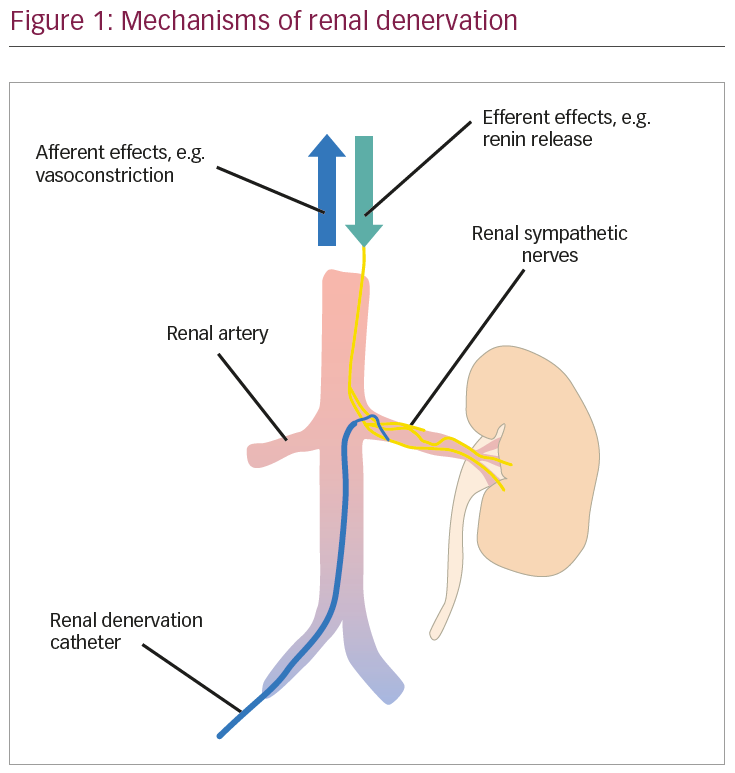 The evidence for RD use in hypertension has a checkered history. In the multicentre SYMPLICITY HTN-1 trial, patients with resistant hypertension (defined as an office blood pressure value of ≥160/90 mmHg and concurrent use of three or more antihypertensive drugs including a diuretic) were treated with RD in a non-randomised fashion.8 Both systolic and diastolic office blood pressures were reduced at 1, 3, 6, 9 and 12-month follow-up.8 The first randomised trial comparing RD to pharmacological management – SYMPLICITY HTN-2 – demonstrated a mean decrease of 32 mmHg (systolic) and 12 mmHg (diastolic) office blood pressure in the RD group after 6 months of follow-up (p<0.0001 compared to the control group receiving pharmacotherapy).9

After the abovementioned proof-of-concept trials, RD was compared to sham procedures for the first time in the SYMPLICITY HTN-3 trial. Patients (n=535) with treatment-resistant hypertension were randomised in a 2:1 fashion to RD or a sham procedure. The prespecified endpoint of superior blood pressure reduction in the RD group was not met (p=0.98).10 The SYMPLICITY HTN-3 trial, however, was subject to several limitations. Adherence to pharmacotherapy was not objectively monitored, and taking into consideration the very significant effect of drug therapy on hypertension control, as well as the blood pressure decrease in the sham group, the inability to account for the impact of the pharmacotherapeutic treatment component was a significant shortcoming of the SYMPLICITY HTN-3 trial. An additional factor which may influence drug adherence is the so-called ‘Hawthorne effect’, which refers to trial participants modifying their behaviour to please the investigating physician. It is challenging to account for this effect in a randomised trial.11 Another issue which might have influenced the results of SYMPLICITY HTN-3 is the tendency for an outlier value to be measured as less extreme on a second occasion, which is known as regression to the mean.12,13 Various statistical approaches are available to compensate for this phenomenon.13 Potential technical confounders of the RD procedure itself included the relative inexperience of the operators, a small number of procedures performed by many of the operators, and the omission of distal renal artery ablation. Anatomical studies in human cadavers have revealed that the renal sympathetic nerves are more closely approximated to the distal than proximal renal arteries, and this might have lessened the effectiveness of the procedure in the SYMPLICITY HTN-3 study.14 Preclinical studies have furnished further evidence regarding the importance of distal RD, which has been addressed in more recent trials of RD.15,16 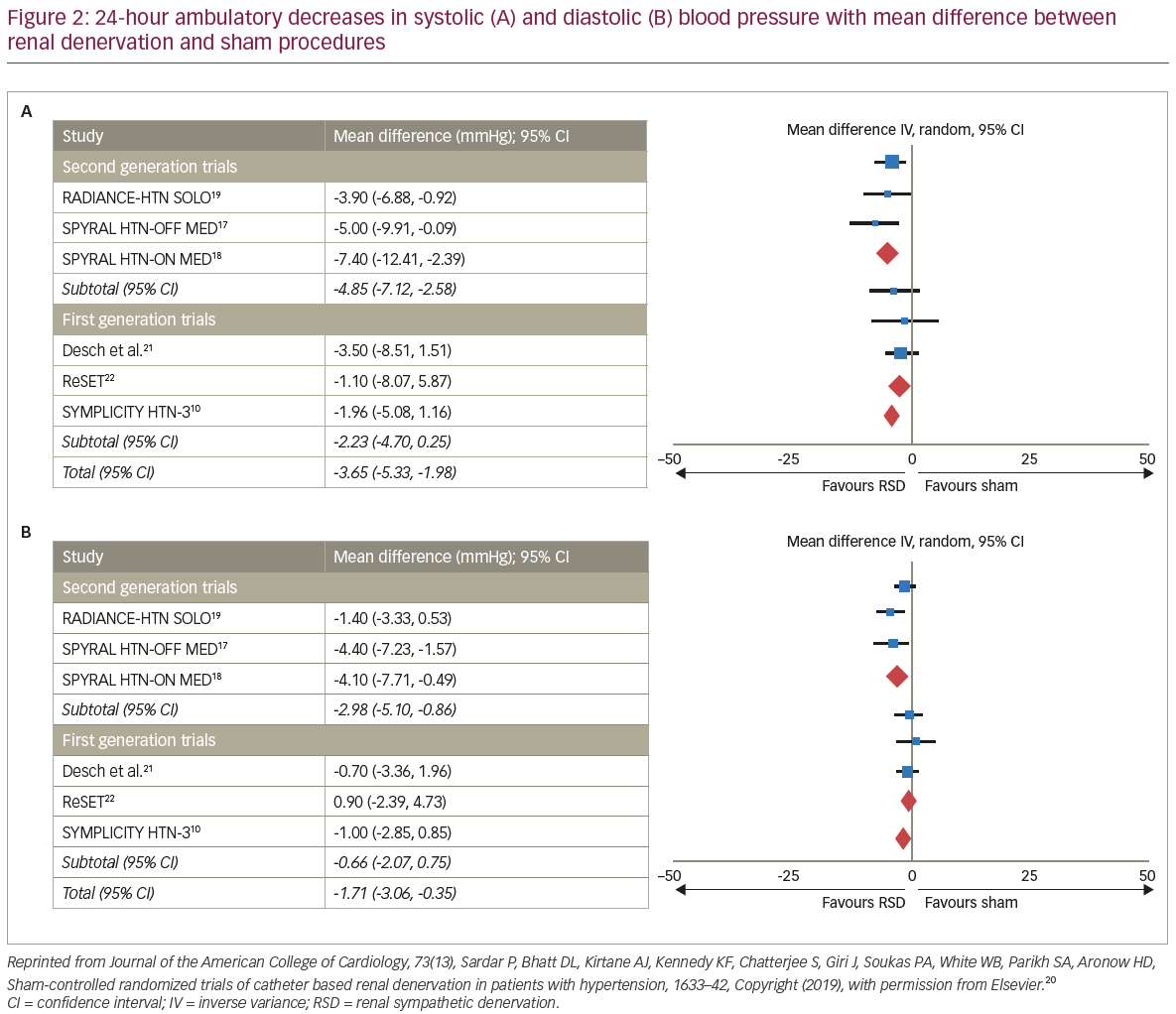 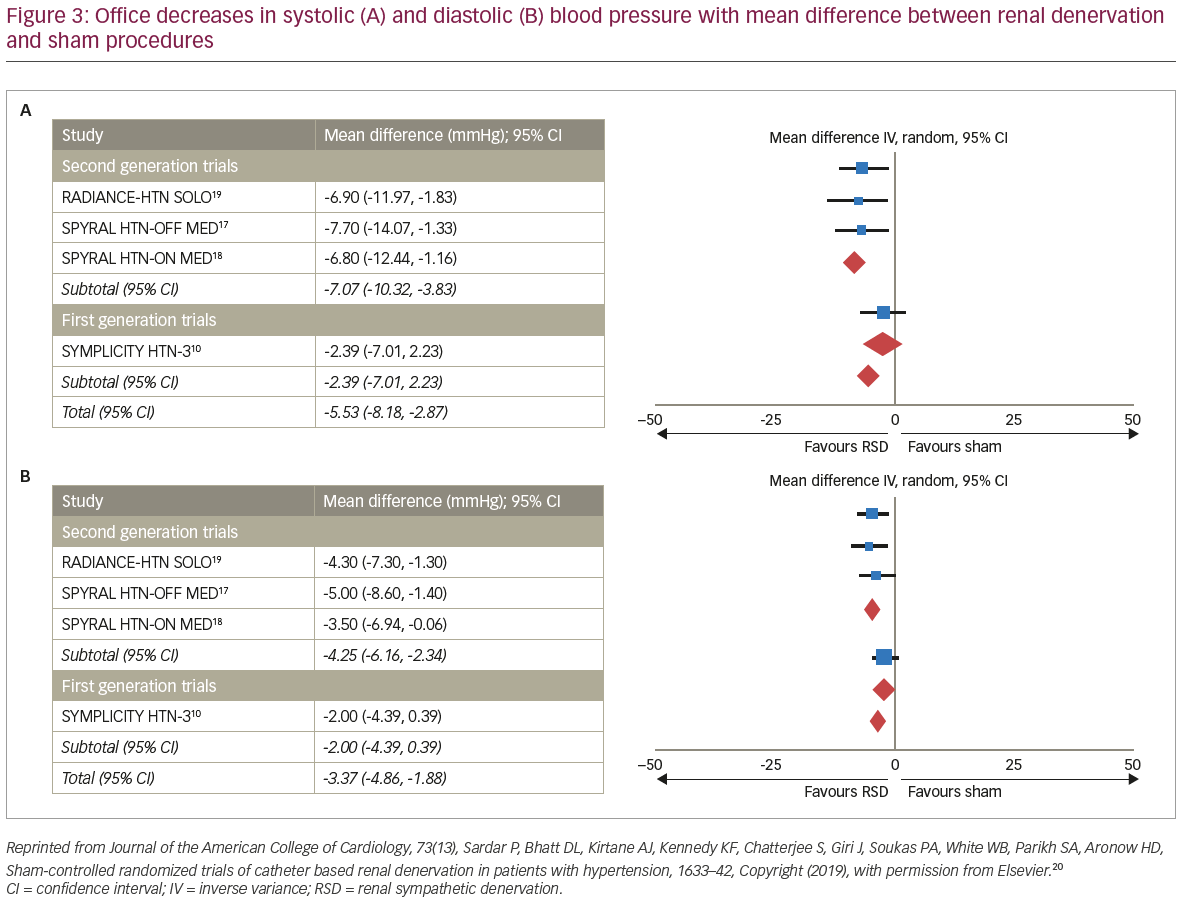 The REDUCE HTN: REINFORCE trial was terminated prematurely due to slow enrolment, although analysis of the data that were recorded demonstrated greater ambulatory and office blood pressure reduction at 6 months in the RD group, compared to controls.23 Two negative trials have been reported on after SYMPLICITY HTN-3, although they were not explicitly designed to overcome the shortcomings of the SYMPLICITY HTN-3 trial and are therefore of limited value to inform clinical practice.21,22

The extension of clinical benefit to patients with non-resistant hypertension in the SPYRAL HTN-OFF MED and RADIANCE-HTN SOLO trials has opened a new chapter in the clinical role of RD. Non-adherence to pharmacotherapy is one of the greatest challenges to the treating physician and it is estimated that up to one-third of patients with hypertension never initiate treatment after prescription.24 Since RD is not dependent on patient adherence, it is promising in addressing this group of individuals. In addition, RD is not subject to the vicissitudes of pharmacokinetics, allowing a continuous antihypertensive effect throughout the diurnal cycle.

Several randomised trials of RD were performed without comparison to a sham group, with varying results.25–33 These trials are summarised in Table 1. Clinical registries of considerable size have enrolled RD recipients (e.g., the Global Symplicity Registry34, the UK Renal Denervation Affiliation study35 and the Swedish national registry36) but with the inherent limitations in providing evidence compared to randomised trials. 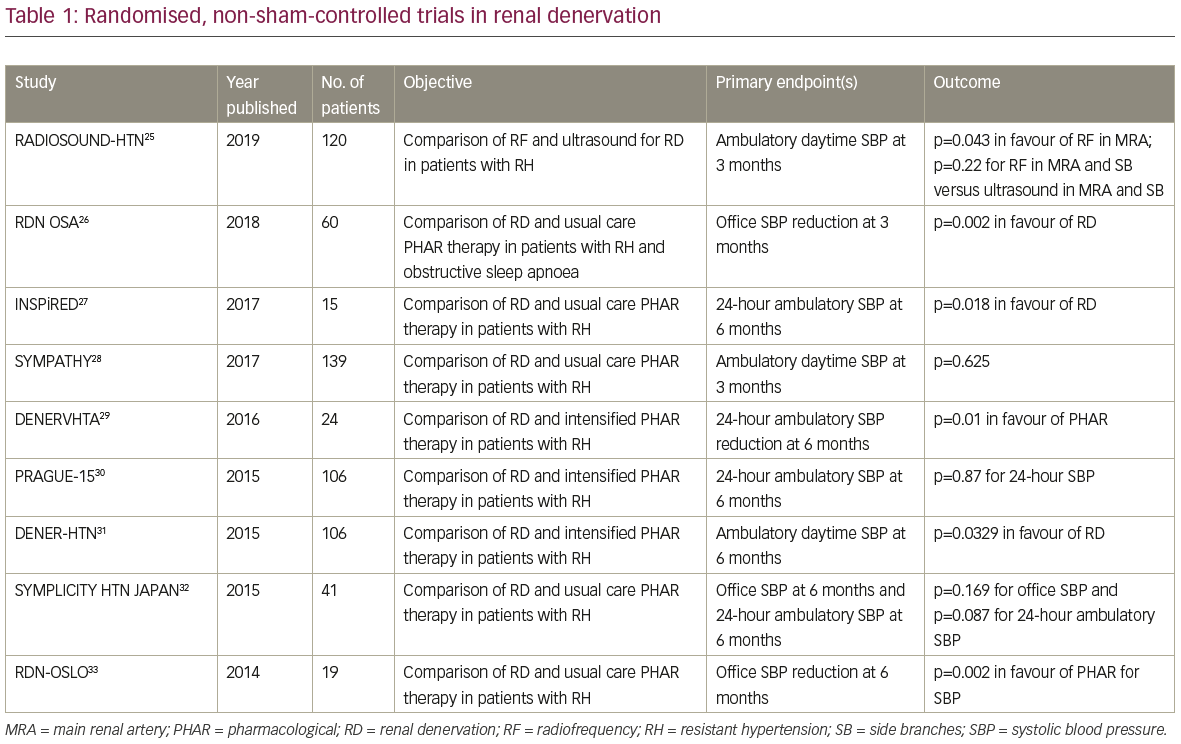 Current guidelines on the management of hypertension were published before the results of the SPYRAL HTN-OFF MED, SPYRAL HTN-ON MED and RADIANCE-HTN SOLO trials were available. Consequently, the IIIB recommendation for RD (i.e., that it be limited to clinical studies) does not reflect the latest evidence, and integration of the abovementioned studies into the next generation of guidelines is eagerly awaited.7,37

Many challenges remain in defining the role of RD in clinical practice. There exists no marker of acute procedural success, and the decision about when denervation has been completed is left up to the discretion of the operator. Other technical issues include variations in renal anatomy, e.g., renal artery aneurysms, renal artery stenosis and renal artery calcification, which might have a bearing on the success of the procedure. Such patients were generally excluded from clinical trials, and little data exist on the success rate of RD in the presence of challenging renal artery anatomy. The long-term durability of RD has also been called into question – if and when renal artery nerve regrowth occurs is unknown. The optimal method of delivering energy to the renal arteries has not been settled yet. In a head-to-head comparison of radiofrequency and ultrasound RD, ultrasound was superior to radiofrequency when ablating the main renal arteries, but not when more distal branches were included.25

In SYMPLICITY HTN-3, African American patients demonstrated a more pronounced response to sham treatment than other demographic groups. This has been ascribed to a higher degree of post-randomisation adherence to drug therapy, although this signal probably warrants further study.40 Angiotensin-converting enzyme inhibitors and beta-blockers are less efficacious in African American patients with hypertension and RD offers a realistic, non-pharmacological alternative.41 Interestingly, RD not only lowered blood pressure in a study of 30 patients with obstructive sleep apnoea (controls, n=30) but also improved the severity of sleep apnoea (measured with the apnoea/hypopnea index).26

While the spotlight has been refocused on RD as a treatment option in the management of hypertension since publication of the SPYRAL HTN-OFF MED, SPYRAL HTN-ON MED and RADIANCE-HTN SOLO trials, further research is required to address the deficiencies of these studies. Drug adherence was only 60% in the SPYRAL HTN-ON MED trial and 20% in the SYMPATHY trial, and could potentially be decreased by combination preparations.18,28 Regression to the mean remains a statistical issue which has not been accounted for in any of the RD trials and may require alternate statistical approaches.13 It is expected that future randomised trials will define endpoints other than the degree of blood pressure reduction, e.g., regression of left ventricular hypertrophy/remodelling and mortality. Finally, the cost-effectiveness of RD will have to be evaluated when compared to pharmacotherapy and alternative invasive modalities, e.g., baroreflex modulation.

RD is an emerging technique for the treatment of patients with high-risk hypertension, which has been proven to be safe and efficacious. Early trials were limited in size, were non-randomised and were performed without a sham group. More recent evidence from studies designed to overcome these limitations supports the use of RD not only for treatment-resistant hypertension but also in patients who are non-adherent and moderately-hypertensive. RD holds promise in the treatment of conditions other than hypertension, e.g., atrial fibrillation and heart failure, due to the involvement of the sympathetic nervous system in these conditions. The identification of patients most likely to respond and gain long-term benefit remains a challenge and requires further study in randomised, sham-controlled clinical trials with rigorous design and long-term follow-up.

Marshall J Heradien, Pieter van der Bijl and Paul A Brink have no financial or non-financial relationships to declare in relation to this article.