A 56-year-old white man was admitted to hospital because of palpitations and dyspnoea. He had no family history of cardiomyopathy or sudden death, and the electrocardiograms (ECG) of his son and parents were normal. He had an history of palpitations, and in the emergency department ECG showed sustained ventricular tachycardia-flutter with inferior axis right bundle branch block (RBBB) in V1 and heart rate 250 beats per minute. His standard ECG showed a complete RBBB pattern with minor ST-T segment changes. 2D echo and coronary angiography were normal, while magnetic resonance imaging (MRI) revealed a reduction in left mid-lateral wall thickening with hypokinetic movement and mild reduction of ejection fraction. An Extensive sub-epicardial area of conspicuous left ventricular intra-myocardial fat and sub-epicardial left ventricular late enhancement in lateral wall, was also seen at MRI. No abnormalities of right ventricular size, function or tissue characterisation were detected. A diagnosis of atypical left dominant arrhythmogenic cardiomyopathy was made, based on clinical and images basis, as gene testing was not available.

The purpose of this report is to describe an unusual case of arrhythmogenic cardiomyopathy, involving the left ventricle (LV), with an atypical standard electrocardiogram (ECG) pattern. Sustained ventricular arrhythmias in a middle-aged subject are usually related to ischemic heart disease. A latent or overt cardiomyopathy is probably the second cause of a rhythm disturbance especially. Idiopathic forms are rare at this age, but only a detailed investigation can clarify the organic substrate, that was so unusual in the following report.

Case report
A 56-year-old white man was admitted to hospital because of palpitations and dyspnoea. He had no family history of cardiomyopathy or sudden death. He complained of palpitations starting in 2002, but had not been to see a doctor. In the emergency department, the ECG showed sustained ventricular tachycardia-flutter with apparently inferior axis right bundle branch block (RBBB) in V1 and heart rate 250 beats per minute (Figure 1). The ventricular tachycardia was associated with initial signs and symptoms of left heart failure and the patient was referred to the Coronary Care Unit where sinus rhythm was restored by direct current electric shock. Symptoms promptly restored after the procedure. The results of the investigation performed are listed in Table 1.

A final diagnosis of left dominant arrhythmogenic cardiomyopathy (LDAC) was reached and the patient was discharged on bisoprololo 10 mg twice per day with indication for very close follow-up and restriction of physical activity. The choice of not implanting an implantable cardioverter-defibrillator or to perform an ablation, was decided after a discussion with the patient, who refused an invasive procedure. After a 4-year follow-up, the patient is asymptomatic, and no repetitive ventricular arrhythmias have been detected during Holter monitoring and exercise stress test.

Limitations
Genetic studies have not yet been performed because of high cost/ effectiveness ratio.

Discussion
After the description of Markus and Fontaine,1 the arrhythmogenic right ventricular dysplasia/cardiomyopathy (ARVD/C) has crossed the borders of the right ventricle. LDAC has been recognised as an associated or isolated entity also characterised pathologically by fibro-adipose replacement of the LV, often occurring as a circumferential band in the outer third of the myocardium and the right side of the inter-ventricular septum.2–5 First described at post-mortem examination in sudden cardiac death (SCD) victims, 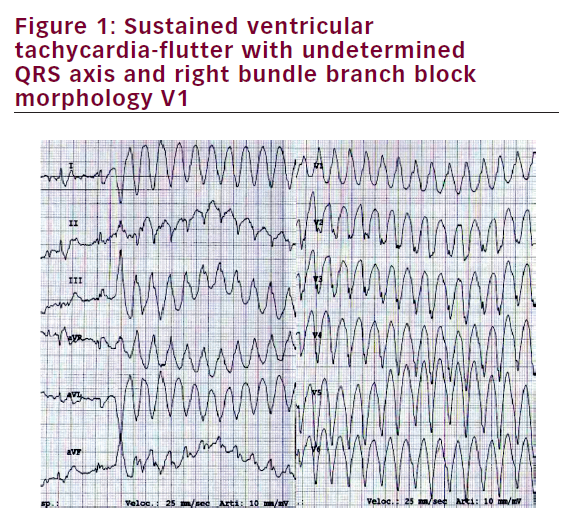 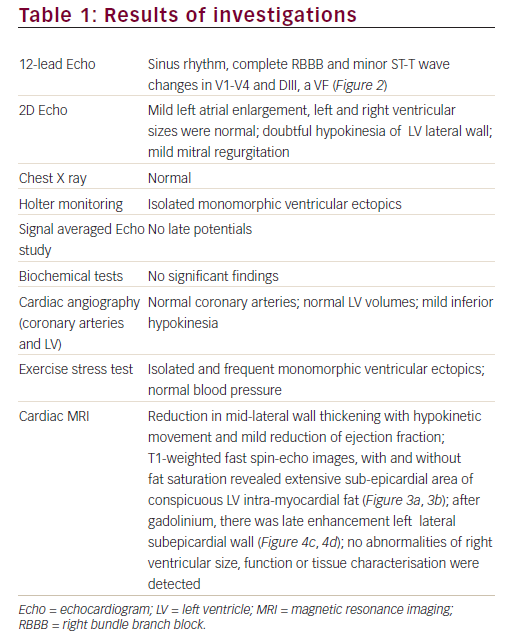 LDAC has been observed in-vivo in surviving relatives, patients with ventricular tachycardia of LV origin and families with predominantly desmoplakin mutations including PKP2, DSG2, DSP, DSC2, JUP,6–9 but also with other genes like PNL.10 LDAC has been recognised as 1 of the 3 patterns of disease expression among families with ARVD/C.9 In contrast to the “classic” subtype,1 with its well-known preference for the right ventricle, and the “biventricular” variant, defined by parallel involvement of both ventricles, LDAC is characterised by early and predominant LV involvement.9 Salient features include inverted T waves in the lateral and/or inferior leads and ventricular arrhythmia of RBBB morphology, consistent with LV origin.6–10 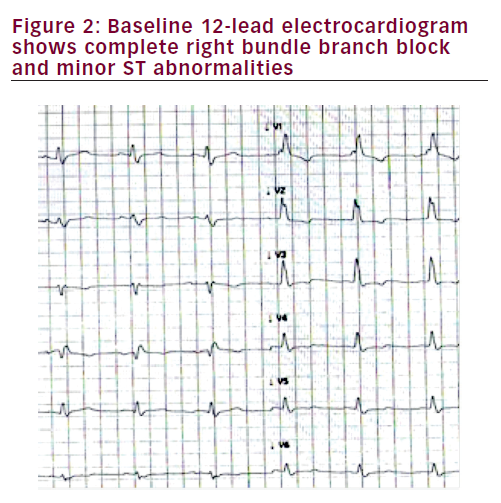 A differential diagnosis includes the entity known as idiopathic myocardial fibrosis (IMF), which accounts for 1–3% of cases of SCD.11–13 IMF is characterised by heterogeneous interstitial fibrosis with a predilection for the inferior LV wall.13 Replacement fibrosis is also observed and fatty infiltration is usually absent.17 Coronary artery disease and other structural abnormalities are by definition absent, indicating myocardial structural damage, for which the primary insult is unknown. While infective myocarditis and age-related degeneration have been cited as possible causes,14,15 it has also been suggested that IMF might be part of the same disease spectrum as ARVD/C. The clinical counterpart of IMF remains incompletely understood. Although the relative paucity of clinical reports of LDAC due to IMF is anecdotally attributed to their low prevalence, under-recognition might be a factor.

The diagnosis of isolated LDAC in the present case report comes from the arrhythmic pattern (sustained ventricular tachycardia with RBBB) and from the cardiac magnetic resonance imaging (MRI) alterations. The standard ECG was atypical, as inverted T waves in the precordial lateral leads were absent, and a complete RBBB was present. The MRI abnormalities we observed, are the same as in most of other reports:6 the fatty replacement and late gadolinium enhancement were seen in the lateral wall of LV with sub-epicardial distribution, and well separated by pericardial fat. In agreement with other studies6,3,16 we also found some LV systolic dysfunction both at angiograph and at MRI. We excluded coronary artery disease with angiography, and MRI revealed that late gadolinium enhancement was not consistent with an ischemic heart disease, which usually involves the inner myocardial layers.

We also excluded a diagnosis of dilated cardiomyopathy and right predominantly ARVD/C because of the MRI pattern. It has recently been suggested that the LDAC phenotype might be the result of chronic myocarditis.14 Bauce et al.15 described a clinical presentation with myocarditis in two siblings with familial arrhythmogenic cardiomyopathy secondary to a mutation in desmoplakin; both had chest pain, ST-segment elevation and myocardial enzyme release in the setting of angiografically normal coronary artery. Assomul et al.16 confirmed the findings. 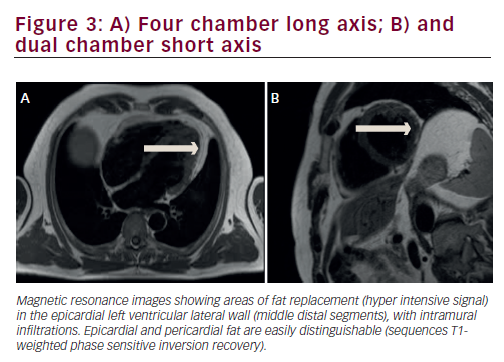 Our patient’s clinical history, signs, symptoms and the biochemical test (no increase in myocardial enzyme or inflammatory markers) and no ECG alteration (ST-segment elevation) doesn’t suggest myocarditis or other inflammatory heart disease like sarcoidosis. Unfortunately, we had no access to a bioptic and genetic study, that could be so relevant for establishing a definitive diagnosis of a rare disease with an increasing popularity.17 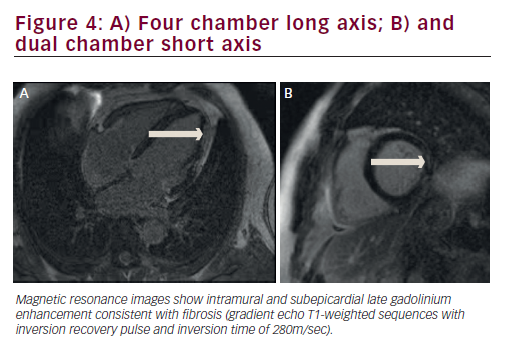 Conclusion
LDAC is a rare structural myocardial abnormality frequently associated with genetic abnormalities, causing apparently idiopathic ventricular arrhythmias. It can be suspected when finding inverted T waves in infero-lateral leads and a RBBB QRS morphology during the ventricular arrhythmia. Our case confirms that some atypical cases may present and that only Cardiac MRI can make a reliable diagnosis.

Francesco Guglielmi, Sergio Cannas, Rocco Arancio, Nicolò Martini, and Bortolo Martini have no conflicts of interest to declare in relation to this article. No
funding was received in the publication of the article.
Compliance with Ethical Guidance: All procedures were followed in accordance with the responsible committee on human experimentation and with the Helsinki
Declaration of 1975 and subsequent revisions, and informed consent was received from the patient involved in this case study.

This article is published under the Creative Commons Attribution Noncommercial License, which permits any non-commercial use, distribution, adaptation
and reproduction provided the original author(s) and source are given appropriate credit.