Introduction: Aortic valve replacement (AVR) improves outcome in patients with severe aortic stenosis (AS). Nevertheless, late mortality remains high (15–35% at 3.5 years in some series) following AVR and is associated with myocardial scarring. Whether excessive mortality is due to heart failure or arrhythmia is unknown, and the burden of ventricular arrhythmia after surgical AVR remains poorly characterised.

Objectives: To determine the incidence of ventricular arrhythmia, post-AVR for severe AS in patients with implantable electronic devices (IEDs) compared with a control group of patients with IEDs but no history of aortic valve disease.

Methods: A total of 134 consecutive patients undergoing surgical aortic valve replacement (SAVR) for severe AS between January 2016 and May 2018 who had a pacemaker or defibrillator implanted post-AVR were retrospectively reviewed. Exclusions (n=85) were non-aortic moderate-to-severe valve disease (n=21), history of cardiomyopathy (n=44) and follow-up at a different centre (n=20). The primary outcomes were incidence and burden of ventricular arrhythmia. Device and demographic data were reviewed via patients’ electronic records.

Results: A total of 98 patients were included (49 AS and 49 control). The mean age of AS patients was 67 ± 13 years. Common comorbidities were arterial hypertension (n=41; 84%), diabetes mellitus (n=9; 18%) and chronic kidney disease (n=2; 4%) with only a minority of patients having significant left ventricular impairment (n=3, 6%). Compared with the AS cohort, the control cohort was older (74 ± 13 years vs 67 ± 13 years), had less hypertension (n=24; 49% vs 84%), had more diabetes mellitus (n=14; 29% vs 18%) and chronic kidney disease (n=6; 12% vs 4%). All patients in this cohort had preserved left ventricular ejection fraction. Bradycardia indications for implantation in the AVR cohort were atrioventricular block (77%) and sinus node disease (23%). In contrast, indication for ppm implantation in the control group were atrioventricular block (94%) and documented bradycardia in the context of atrial fibrillation (6%). Exclusion criteria for the control group were history of valve disease, cardiomyopathy, ≥ mildly impaired left ventricular ejection fraction and previous open-heart surgery. At a median follow-up of 38 and 39 months for the control and SAVR groups, respectively, we documented ventricular arrhythmias in 31 SAVR patients (63%) and in 19 control patients (39%; p=0.0257). In the SAVR group, 24 patients (49%) had documented nonsustained ventricular tachycardia (NSVT) and 7 patients (14%) had documented sustained VT episodes, whereas in the control group, 14 patients (29%) had NSVT and 5 patients (10%) had sustained VT. Time from device implantation to first arrhythmia recording was 156 (IQR 35–402) and 163 (IQR 71–474) days in the SAVR and control groups, respectively. Ventricular arrhythmia was an isolated event (1–2 episodes) in 45% of the SAVR group who had arrhythmia and 58% in the control group. Mortality rate for AVR was 14% (n=7) and 2% (n=1) for the control group. One AVR death was documented as an arrhythmic cause; the remaining reported causes were unavailable. A control group patient died due to organ failure.

Conclusion: Ventricular tachycardia (VT/NSVT) was more common in patients after SAVR for severe AS than an unselected IED cohort, though the overall burden was low and primarily isolated asymptomatic episodes. Further prospective studies are required to understand the mode of death after AVR and whether NSVT is a relevant marker of prognosis. ❑ 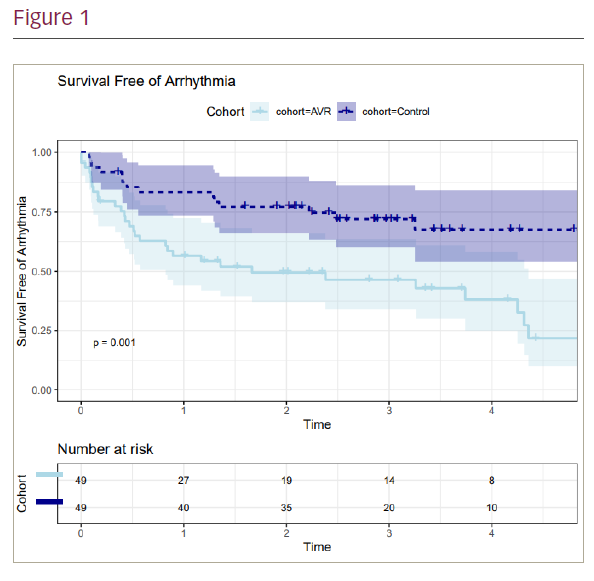