Background: A ‘fixed’ Type 1 Brugada (BrS) ECG is conventionally regarded as a marker of high risk, despite its absence in a significant number of sudden cardiac death survivors. The increased propensity for ventricular arrhythmias (VA) during different autonomic/physiological stressors suggests that the arrhythmogenic potential is dynamic, but the published evidence for this is scant. Using exercise with non-invasive electrocardiographic imaging (ECGi), we hypothesize that dynamic ST
segment changes also carry an increased risk of VA in BrS.
Objective: To compare the peri-ventricular tachycardia (VT) epicardial electrogram (EGM) characteristics between a patient with BrS and a patient without BrS with right ventricular outflow tract VT (RVOT-VT).
Methods: ECGi vest recordings were performed on a 65-year-old BrS VF survivor (with ICD) and a 49-year-old patient with a structurally normal heart and previously documented RVOT-VT during repeated exercise treadmill testing using the Bruce protocol. Neither patient had competing cardiac conditions nor had they taken cardiac medications in the 48 hours prior to the tests. Both patients had self-terminating VT on at least one test. Epicardial EGMs were reconstructed onto a CT-derived
3D ventricular mesh. EGMs were compared between tests, epicardial surface locations and through recovery.
Results: BrS patterns were absent in both patients at resting baseline. Due to large-magnitude myopotentials during exercise, the immediate pre-VT period could not be reliably analysed by ECGi. Coved ST elevation was seen during and immediately post-VT in the BrS patient in reconstructed epicardial EGMs from the RVOT. The equivalent EGM in the RVOT-VT subject lacks the characteristic Brugada pattern entirely. These ST segment changes were not seen at equivalent sinus rates in a second exercise test that did not trigger VT – indicating that it is not simply a rate-related phenomenon. These ST segment changes do not fully resolve until ~5 minutes post-termination, raising the possibility that dynamic ST elevation in sinus rhythm may have an association with ventricular arrhythmia.
Conclusions: This case demonstrates the dynamic nature of ST segment elevation in BrS and its association with VA. This supports the observation of the absence of a ‘fixed’ type I pattern in significant portion of SCD survivors, and that the presence of a dynamic Type 1 BrS pattern may be another high-risk marker for VA. 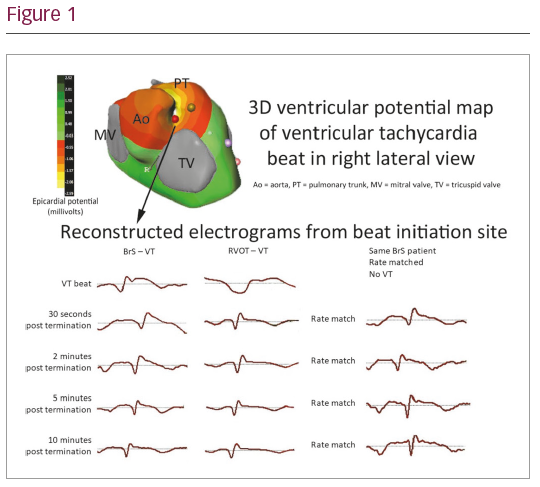