Introduction: Local abnormal ventricular activities (LAVAs) are key targets for substrate-based ablation of ventricular tachycardia (VT). LAVAs are traditionally mapped with the ablation catheter. The distal electrode of the ablation catheter has to be large for effective lesion formation (whether by radiofrequency energy or cryothermia), but this is not conducive to high-definition mapping of low-amplitude highly fractionated electrograms, which are the hallmarks of LAVAs. High-density mapping catheters (e.g. the Advisor HD grid catheter from Abbott, the Pentaray from Biosense-Webster) might reveal LAVAs that would have been missed by the ablation catheter. These additional targets for ablation might improve the clinical efficacy of the procedure.

Methods: VT ablation was performed in sinus rhythm with a substrate-based approach whenever possible in order to avoid haemodynamic instability in patients with structural heart disease at the authors’ institute. The endocardial surface of the relevant ventricular chamber (mainly the left ventricle) was first mapped with the Advisor HD grid catheter. All the LAVAs identified by the multi-poles of the catheter (Figure 1) were tagged in the conventional substrate map based on the maximum local electrogram amplitude (Figure 2a). All the LAVAs identified, which might be in or around ‘scarred’ areas or in apparently ‘healthy’ areas, were ablated with TactiCath (Abbott). No other ablation strategies (e.g. scar homogenisation, core isolation, dechannelling) were pursued. The clinical outcomes of a cohort of patients who received only LAVA-guided ablation were analysed.

Results: Between March 2019 and March 2021, 22 patients (20 male; mean age 68 years [32–85]) received only LAVA-guided ablation but no VT ablation in the preceding 12 months were included in the study out of 59 patients who underwent VT ablation. A trans-septal approach was used in 20 of the 22 patients (91%). A median of 3 (2–7) LAVA zones were identified in each patient. Out of the 72 LAVA zones identified, 71 (98.6%) were ablated. A single LAVA zone (1.4%) was not ablated due to proximity to the atrioventricular node. There were no procedural deaths or related complications such as induction of haemodynamically unstable VTs requiring defibrillation. After a median 216 (156–941) days’ follow-up, 4 patients (18%) experienced recurrent VT, and 2 of them (9%) underwent repeat LAVA-guided ablation. The other 2 patients were satisfactorily controlled by their implantable cardioverter defibrillators. Three patients (14%) died due to end-stage heart failure and non-arrhythmic causes.

Conclusion: This retrospective study demonstrated the safety and efficacy of high-density mapped LAVA-guided VT ablation. LAVAs were identified within apparently ‘healthy’ areas of the endocardium, supporting the notion that arrhythmia substrates reside where healthy and diseased myocardial fibres intermingle. The high-density mapped LAVA-guided VT ablation strategy described may have general clinical utility and deserves to be investigated in a large-scale prospective randomised clinical trial. ❑ 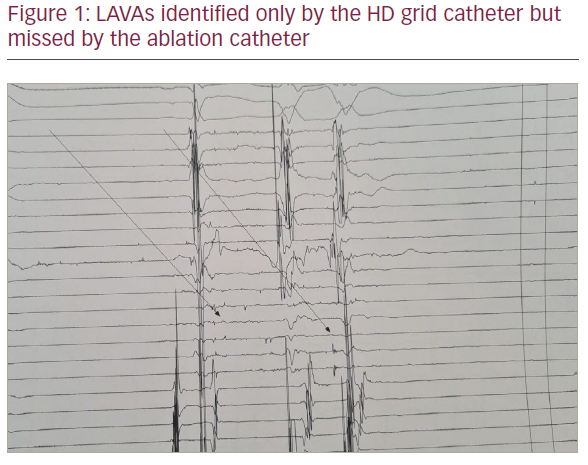 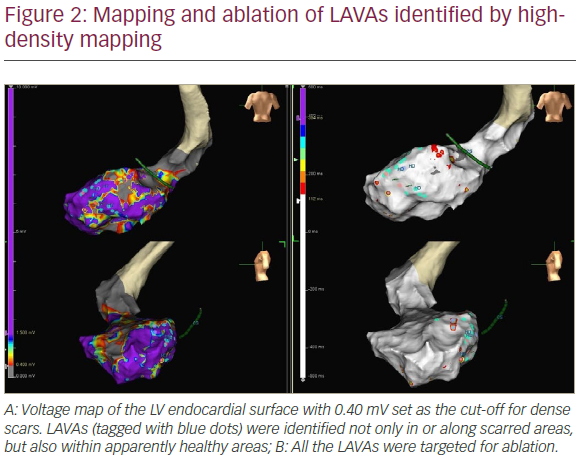