Background: Predictors of effective ablation lesion delivery in the human left ventricle are not established, particularly in scar. Impedance drop and electrogram (EGM) attenuation are potential surrogates to assess this.

Methods: Patients undergoing ventricular tachycardia (VT) ablation were recruited. Mapping and ablation were performed using the Pentaray catheter twinned with Carto3 and the SmartTouch Surround Flow catheter respectively. Only endocardial lesions were considered. EGMs were collected pre- and post-ablation, with impedance, AI and FTI measured during. Percentage impedance drop was used to minimise the effect of starting impedance. Based on pre-ablation bipolar voltage, myocardium was adjudged low (LVM, <0.50 mV), intermediate (IVM, 0.51–1.50 mV) and normal voltage (NVM, >1.50 mV). To establish a parameter predicting lesion completion, the point where further ablation provided little change in biophysical measurements as a surrogate for thermodynamic equilibrium was sought, this being the beginning of the plateau in the impedance drop and AI/FTI relationships. Best fit curves were applied to the datasets, formulae established and the plateau determined as an impedance drop of 0.25% over 100 gs/100 AI. To assess the predictability of AI or FTI upon percentage impedance drop, linear regression was performed from the start of ablation to the calculated plateau points, also including in the model: catheter drift, orientation and endocardial voltage category.

Conclusions: On biophysical analysis, an average ablation beyond AI of 763 and FTI of 713 gs offered little additional efficacy. Increasing scar blunted ablation efficacy and reduced the predictability of ablation. AI had a stronger relationship with impedance drop than FTI. EGM attenuation did not correlate with commonly used ablation parameters, suggesting it is a suboptimal surrogate for ablation lesion progression. 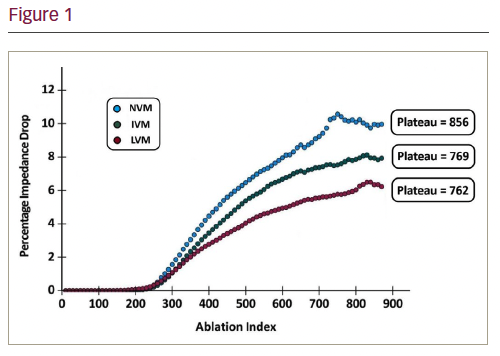