Background: CRT (cardiac resynchronisation therapy) is widely known for improving LV (left ventricular) function in patients with heart failure and dyssynchrony. However, it is unsuccessful in approximately 30–40% of all implants. There have been many studies that have looked at multiple factors to predict response. During a CRT implant – one of the main aims is to narrow the QRS, however there have been very few studies investigating an association between the QRS duration (QRSd) post implant and response to cardiac resynchronisation therapy (CRT). Takenaka et al. (2018) study showed the QRS width may be a predictor of response as it correlated with an improvement of LV end-systolic volume. The aim of this study was to determine if there is an association between the narrowing the QRS and response in patients with biventricular pacemakers by evaluating EF (ejection fraction) and LV function.

Methods: This retrospective study included 46 patients, all of whom had a CRT device implanted between the years of 2017–8. Responders to CRT were defined as those having a greater or equal to 10% increase in EF by echocardiography at the 6-month follow up or an improvement in LV function. The QRSd was analysed in precordial lead – V1, pre and post CRT implant, and compared to the non-responder group. Clinical characteristics are shown in Table 1. All patients had a 12-lead ECG before and after implant (during biventricular pacing). 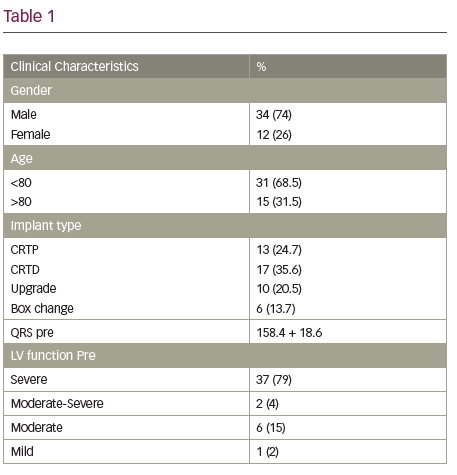