Introduction: Catheter ablation for symptomatic AF is a well-established treatment. The generally accepted model is for overnight hospital stay post-procedure but given the rising incidence of AF and number of AF ablations performed, streamlining of practice to minimise overnight stay could result in a significant reduction in waiting list times and procedure-related healthcare expenditure. However, procedural outcomes and safety should not be compromised to achieve this.

Day case AF ablation has been carried out at Royal Papworth Hospital (RPH) since early 2017. We evaluated the feasibility, safety and efficacy of day case versus inpatient AF ablation at RPH.

Method: Retrospective, single-centre study of 452 consecutive AF ablations in 448 patients at RPH between March 2017 and April 2018. Ablation method (cryoballoon, Carto, PVAC gold or Acutus) was selected at the operator’s discretion. Vitamin K antagonists were continued and direct oral anticoagulants withheld for one dose pre-procedure in line with departmental policy. Ultrasound was not routinely used for femoral venous puncture. Haemostasis post-sheath removal was achieved with manual pressure. The consultant listing the patient at initial assessment subjectively determined suitability for day case.

Complications were defined as any adverse procedure-related event. Success was defined as freedom from symptoms or demonstrable arrhythmia after 6 months following an initial 3-month blanking period.

Results: Over the study period 129 out of 452 (28.5%) were planned day cases. Of these, 128 (99.2%) were discharged on the same day; one patient was admitted due to late finish. Forty were performed as day cases despite being originally listed as inpatient procedures. There was no significant difference in age or sex between the groups. Of note, day case procedures were significantly shorter, more likely to commence in the morning and less likely to require general anaesthetic than overnight stays. Patients listed as day cases also had less far to travel.

Procedural outcomes are summarised in Table 1. Overall complication rate was 3.3%, with no significant difference between groups. One planned day case was complicated by intraprocedural phrenic nerve palsy from which a full recovery was made and another by transient migraine. A further case resulted in atrio-oesophageal fistula and death 3 weeks post-discharge. One patient discharged the same day despite planned overnight stay presented to his local DGH 3 days later with pulmonary oedema.

Follow up data was available for 448 cases (99.1%). Procedural success rates were comparable between groups. 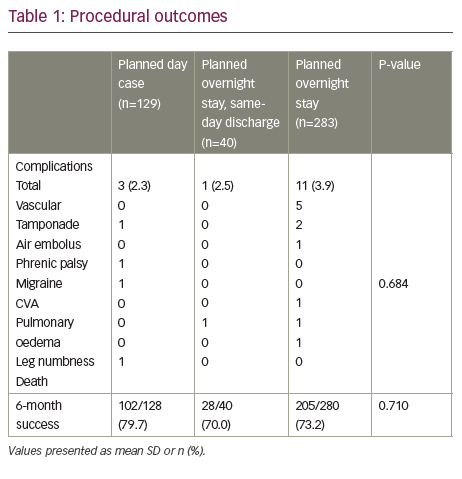