Background: Many dilated cardiomyopathy (DCM) patients have improvement in cardiac function with therapy. TRED-HF investigated the safety and feasibility of therapy withdrawal in such patients.

Methods: 45 participants from TRED-HF, (25 – control group and 20 – therapy withdrawal group), who had cardiopulmonary exercise testing (CPET) at baseline and follow-up were included (Figure 1). Change in VE burden (number of ventricular ectopic beats per minute) during exercise between baseline and follow-up was compared between groups in the randomised phase using the Mann-Whitney test. Twenty patients in the control group had therapy withdrawn in the cross-over phase with repeat CPET at follow-up. Change in VE burden amongst these patients was compared between the control and cross-over phases using the paired samples sign test. Correlation between change in VE burden and changes in left ventricular ejection fraction (LVEF), NT-pro-BNP and peak VO2 was examined using Spearman’s correlation. Baseline VE burden was compared amongst patients who had therapy withdrawal, based on the occurrence of the primary end-point.

Interpretation: Therapy withdrawal in recovered DCM was not associated with an increased VE burden during exercise. 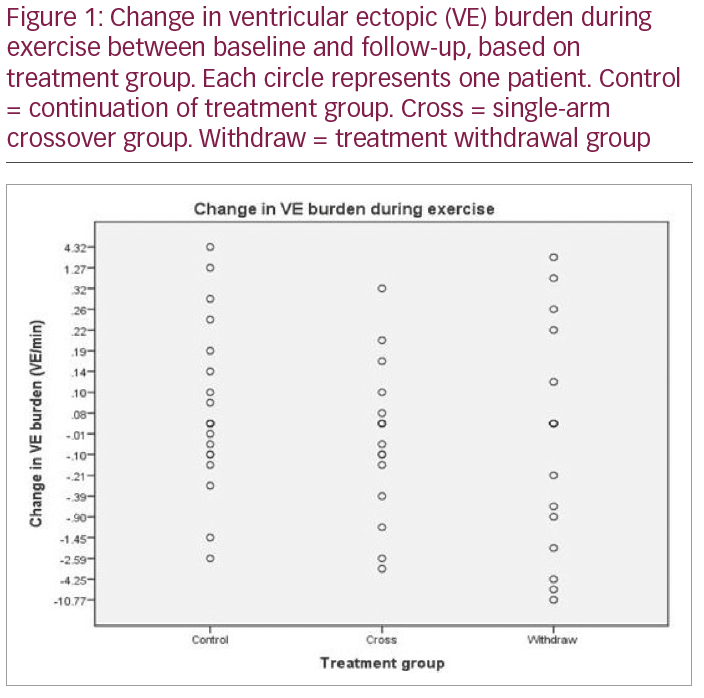