Background: The demands on modern cardiology departments for advanced diagnostic and invasive services, has placed a large demand on the skills and services of experienced cardiac physiologists. This demand for experienced and accredited staff has meant that there are some occasions where less experienced staff may be required to program pacemakers to suit a particular patient’s implant indication.

Non-patient specific programming or out of the box device settings have the potential to deliver potentially deleterious unnecessary RV apical pacing. Out of the box programming has potential not to alleviate symptomatic sinus node dysfunction in patients who require a degree of atrial pacing, or rate support when exercising or at rest.

This quality improvement project was initiated to attempt to improve and standardise the programming of all patients who are implanted with a pacemaker at the Great Western Hospital.

Method: Two months of consecutive pacemaker implant programming were analysed and compared to what would be considered “best practice” for the patients implant indication ACC/AHA/HRS (2008).

An algorithm for device programming was developed, which guides the physiologist through the programming of the device based upon implant indication.

Following a 3-month implementation period a further 2 months of pacemaker implants were assessed and compared to “best practice” provided by the algorithm.

Results: During the initial 2-months assessment, 45 pacemakers were implanted, of these 37 (82%) were programmed correctly in accordance with their implant indication. The most common outcomes of incorrect programming were inappropriate RV pacing, lack of rate response and rate drop algorithms.

In the 2-month period post intervention, 57 pacemakers were implanted. There was a significant improvement in correct programming, 54 (95%, p=0.04) were programmed in accordance with the programming algorithm. 2 patients had unnecessary RV apical pacing and one did not have rate response programmed for AF with complete heart block. 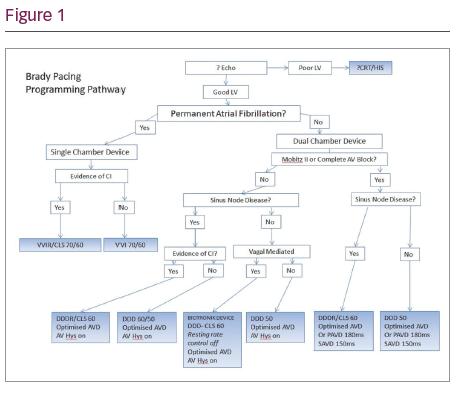