Background: Ischaemic stroke is a leading cause of morbidity and mortality worldwide with around 100,000 individuals suffering a stroke in the United Kingdom each year. Around a fifth of these events are cardioembolic in origin, often due to arrhythmias such as atrial fibrillation (AF) or atrial flutter (AFl). Although national guidelines currently recommend prolonged ECG monitoring to assess for a cardioembolic source, the optimal length of cardiac monitoring remains uncertain and there is no consensus as to the minimum duration of atrial fibrillation that constitutes a risk of thromboembolism. Studies have indicated that the insertion of an implantable cardiac monitor (ICM) can improve the detection of atrial arrhythmia. However, there is also evidence that extending monitoring beyond 7 days duration is unlikely to be cost-effective. We aimed to assess the current use of ambulatory ECG (AECG) in patients admitted with acute ischaemic stroke at a large teaching hospital.

Methods: A retrospective observational study was performed on all patients who were admitted to Leeds Teaching Hospitals NHS Trust with a diagnosis of acute ischaemic stroke between January 2014 and December 2015. The number of AECGs performed, the total recording time and the frequency of supraventricular tachyarrhythmia were recorded.

Conclusions: This study confirms that the detection of atrial arrhythmia improves as the length of cardiac rhythm monitoring increases. However, there remains significant variability in the length and number of AECGs requested. Additionally, a significant proportion of AECGs are performed in patients who do not require cardiac rhythm monitoring, either because they have a history of atrial arrhythmia or because they have persistent AF/AFl at presentation. A more detailed clinical assessment at presentation could help to reduce the demand of AECGs in this patient population. As a consequence of this study, we have now recommended that for patients who present with acute ischaemic stroke to our Trust, a 72-hour AECG is performed as standard if there is a suspicion of a cardioembolic source. More prolonged AECG, including the insertion of an ICM, is only considered if a patient has suffered more than one ischaemic stroke in separate cerebrovascular territories. 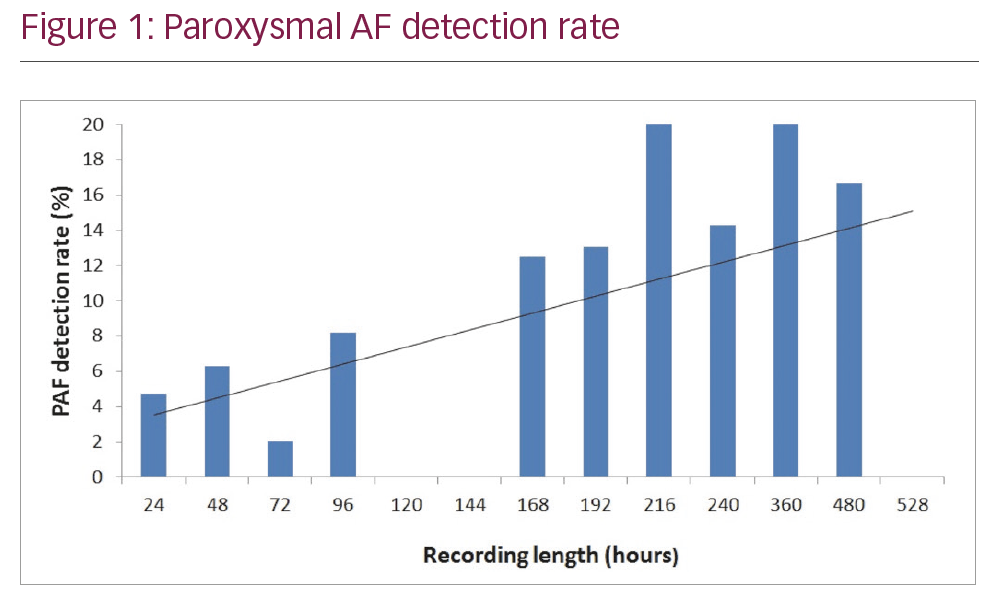