Introduction: Clinical follow-up is recommended following catheter ablation of supraventricular tachycardia (SVT) and typical atrial flutter. However, decisions regarding further care are frequently based upon patients’ symptoms and physical examination is rarely required. There is increasing pressure on physical resources including out-patient capacity in secondary care within the NHS. Remote follow-up may relieve this pressure while maintaining high clinical standards.

Methods: From December 2018 onwards, patients undergoing catheter ablation for SVT or typical atrial flutter at Royal Papworth Hospital were offered either a telephone-based follow-up (Tel-FU) or physical appointment planned for 3 months post-procedure. Follow-up was conducted by an arrhythmia specialist nurse (ASN) unless otherwise stipulated. Patients undergoing Tel-FU for pre-excited accessory pathways or typical flutter ablation were asked to visit their local GP for an ECG around the time of follow-up. Outcomes of remote follow-up were recorded.

Results: From December 2018 to May 2019, there were 150 patients admitted for planned ablation of SVT or typical atrial flutter. Tel-FU was offered to 109 (73%) patients (see Figure 1). The performing consultant preferred physical follow-up in 28 (19%) and an additional procedure was planned in eight (7%). Tel-FU was accepted by 98 (90%) of those offered. Patients who declined tel-FU were older than those who accepted (65 ± 18 years versus 54 ± 18 years, p=0.05). Reasons for preferring physical follow-up included hearing or language difficulties and attending with family members.

To date, Tel-FU has been carried out in 36 patients (mean age 51 ± 17 range 18–78 years, 35% male). The Tel-FU was successful in 33 (92%) patients with the remaining three patients being uncontactable at the pre-scheduled time. All contacted patients were successfully managed and discharged. Mean time to follow-up was 86 ± 10 days. A follow-up ECG was required in 11 (31%) and documented in six (55%) of these. Additional patient contact occurred in five (19%) patients: three patients had complained of symptoms prior to follow-up and had an ambulatory ECG; two patients had physical follow-up arranged at their referring hospital. The average avoided journey distance in those undergoing Tel-FU was 79 miles per patient. 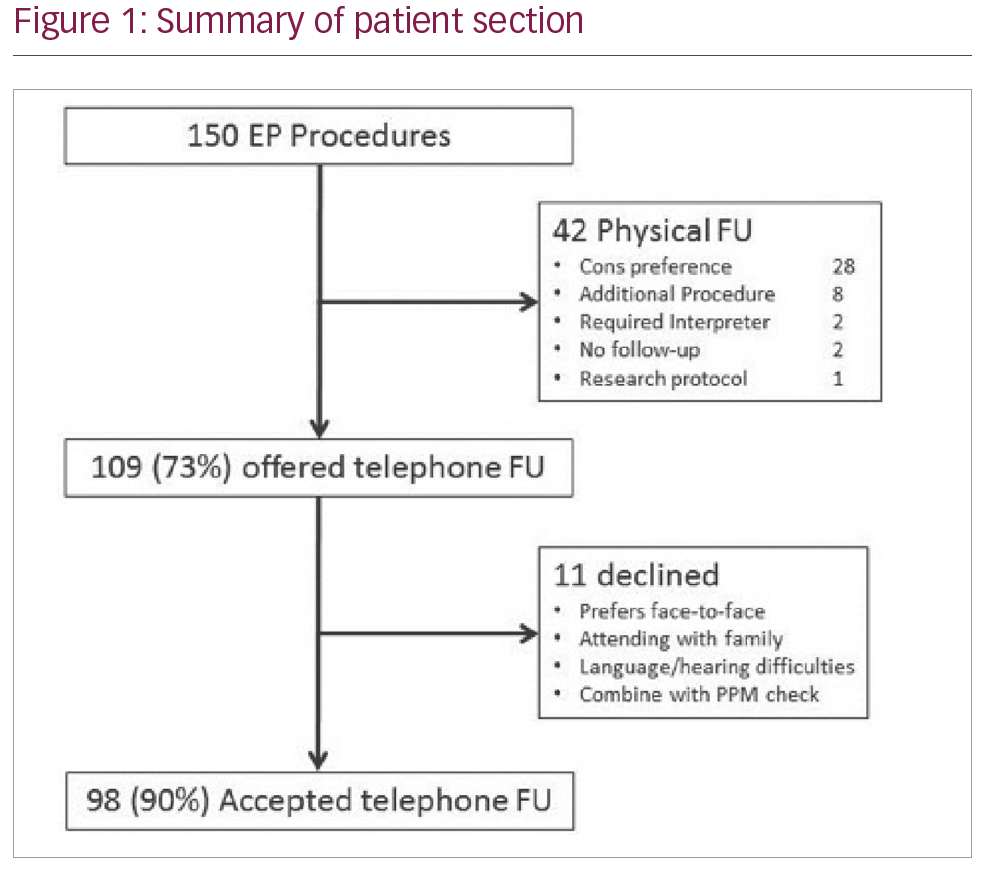