Background: Localised drivers in the form of intermittent focal and rotational activations have been proposed as mechanisms sustaining persistent AF. The possibility of a relationship between these phenomena has not been explored and any interaction with structural remodelling remains unclear.

Methods: Patient undergoing catheter ablation for persistent AF were included. Patients underwent pulmonary vein isolation (PVI) with further ablation being limited to focal and rotational drivers identified on CARTOFINDER activation maps. Potential focal drivers were defined as ≥2 consecutive focal activations with radial spread and rotational drivers were defined as ≥1.5 rotations of 360 degrees A study-defined ablation response included i) AF termination to sinus rhythm or atrial tachycardia (AT) and ii) CL slowing ≥30 ms. Study aim was to assess the relationship of drivers to underlying structural remodelling (i.e. low voltage zones (LVZs) <0.5 mV) and to determine whether there was a temporal (≤500 ms) and spatial (≤12 mm) relationship between focal and rotational drivers.

Conclusions: Although rotational drivers are mostly dependent on structural remodelling, focal driver are not. Rotational drivers mapped to LVZs usually demonstrate spatial and temporal relationship to focal drivers. The ablation response suggests that rotational activity is more important when it occurs in LVZs and in particular, when it is paired with a focal activation. These novel mechanistic observations outline a plausible model for patient specific mechanisms maintaining AF. 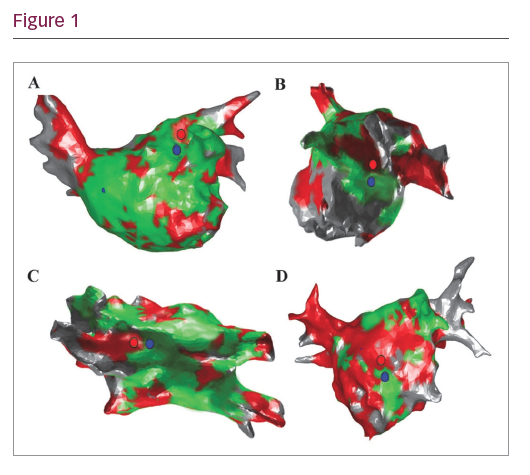