Background: Subcutaneous implantable cardioverter defibrillators (S-ICD) have been implanted at the Nottingham University Hospitals NHS Trust since December 2014, by a single operator with no prior experience of implant technique, with a proctor for two cases.

Objective: To report on demographics of patients selected for the S-ICD; procedural data and success, and complication rates.

Methods: A database of all new S-ICD implants over the past 4.5 years was analysed and compared to the post-market approval study (PAS), which was performed in a contemporary real-world setting.1 Procedural success was measured as conversion rate of induced ventricular fibrillation. System- and procedure-related complications were defined as complications that were caused by, or would not have occurred in the absence of the S-ICD. Complications were considered according to procedure volume (Quartile (Q) 1: implants 1–4; Q2: implants 5–12; Q3: implants 13–28; Q4: implants >28), recognising the learning curve associated with a new procedure,2 and were reported at 30 and 180 days.

We used fluoroscopy for all procedures, and performed 40% of our procedures under local anaesthesia. After the initial learning curve, the two-incision technique was used preferentially. Ventricular fibrillation was induced in 48 cases, and all were successfully converted. All patients had dual zone programming.

Conclusion: We appeared to have more stringent selection criteria for the S-ICD compared to the PAS1, implanting in a younger population with lesser comorbidities and a high incidence of inherited cardiac conditions. Our procedural success was higher, with lower complication rates after the initial learning curve compared to published data.1,2 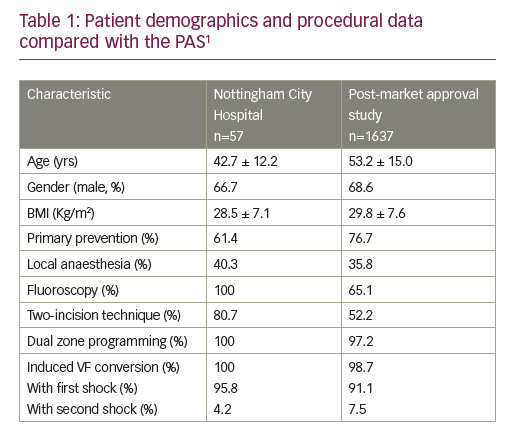