Eighteen-year-old man with a history of symptomatic atrial fibrillation (AF) and subtle signs of ventricular pre-excitation on his ECG was referred for electrophysiology testing. During sinus rhythm, earliest onset of ventricular activation was located at the His-bundle catheter, which was positioned proximally, to avoid the right bundle potential (AH 62 ms, HV 26 ms). Retrograde conduction was decremental and concentric in nature. At first glance, those findings suggested the presence of an anteroseptal accessory pathway (AP). However, the HV interval remained short and fixed even when cardiac stimulation was initiated from different atrial locations, incrementally, and with different AH values; AF, provoked by atrial stimulation, also did not alter the short HV value, or the pre-excited QRS morphology. Circus movement tachycardia was not observed. Flecainide was administered intravenously to terminate his AF, and his heart rhythm, HV values, and QRS complexes normalised in response to this.

The data obtained confirmed that patient had inducible AF and a bystander AP, the latter being fasciculoventricular (FV) in origin. A nodo-ventricular AP was not ruled out by the study but was statistically unlikely; this type of AP might also have produced further shortening of the HV interval during significant AH delays (a finding not observed intra-procedurally).

Bypass tracts arise from the His bundle or proximal fascicles and are completely infra-nodal. They are uncommon, do not participate actively in re-entrant circuits, and are not arrhythmogenic. Recognition is important, as ablation is unnecessary, and might be harmful if attempted, the tract being close to the His bundle. The patient was reassured and opted to continue conservative AF management. 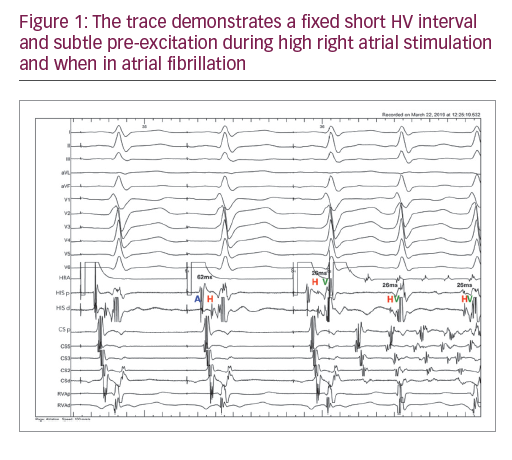