Methods: We use the simplified Fenton-Karma in silico cardiac cell model with a variety of different stimuli, model parameters and conductivity diffusion tensor maps to produce simulations in a two-dimensional field. Both isotropic and anisotropic cases are considered for the diffusion tensor fields. Unipolar EGM signals are generated, with a sampling rate of 1 ms, and the same spatial density that can be achieved with a high-density mapping catheter (HD grid). The signals are used as the input to a Fully Convolutional Encoder-Decoder network, which is trained to output the three values Dxx, Dyy, Dxy of the diffusion tensor at each point on the field. The statistical significance of the predicted fields is quantified using wavelet-based surrogate data testing.

Results: Our deep neural network achieves a small generalisation error, with a Root Mean Square Error of 1.18 and 1.38 in the training and testing set, respectively, both containing isotropic heterogeneous, as well as isotropic diffusion, tensor fields. When low conductivity regions (areas of fibrosis) are present, the network is able to successfully identify their position, and surrogate data testing shows that the true and predicted diffusion tensor fields are positively correlated as expected, while the predictions on the testing set are statistically significant from the average
generated scar distribution (p-value = 6´10-8). Regarding pixelwise scar prediction, a Jaccard similarity coefficient of 0.91 is achieved, showing a high accuracy in the detection of the scar position.

Conclusions: This work is a proof of concept that deep neural networks can be used to solve the inverse problem of estimating substrate properties of myocardial tissue from unipolar electrogram data, specifically the heterogeneous isotropic, and anisotropic, conductivity tensor fields, representing scar and fibre orientation. Going forward and following appropriate adjustments, this technique could be applied and optimised in a biological setting.

Acknowledgements: This work was supported by the Wellcome Trust (Grant reference number: 222845/Z/21/Z), and the Rosetrees Trust Grant (M577). 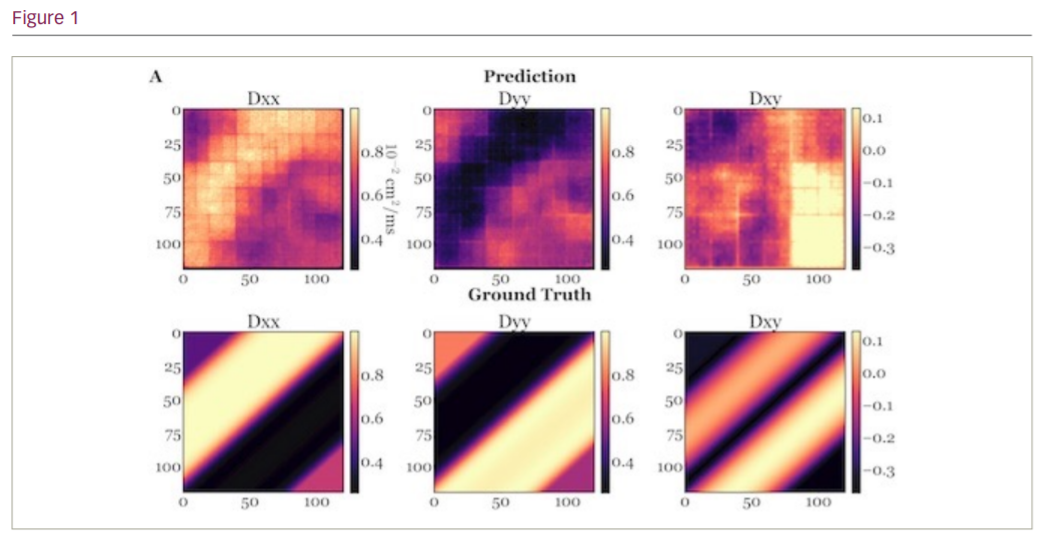