Aims: The rate of left ventricular (LV) lead displacement after cardiac resynchronization therapy (CRT) remains high (2–10%) despite recent improvements in lead technology. This post-operative complication often results in an increase in pacing threshold and subsequent loss of ventricular capture, thus negating the benefits of resynchronisation therapy. Under the circumstances where there is loss of ventricular capture from all the available pacing vectors, a repeat procedure is nearly always required to replace the lead. In August 2017, Medtronic introduced a new quadripolar lead with active fixation technology, the Attain Stability Quad 4798. The novel design feature of this lead is the inclusion of an electrically inactive side helix that actively fixes the lead body to the target vessel. The goal of our study was to assess whether this active fixation lead had a lower incidence of displacement and re-intervention compared to conventional passive fixation quadripolar LV leads.

Methods: This was a retrospective, observational study analysing device complications in 1,023 consecutive patients undergoing successful first-time implantation of a CRT device at a UK tertiary centre (John Radcliffe Hospital, Oxford). All patients inserted with a quadripolar LV lead between November 2010 and July 2020 were included in the study. This time period reflects the start of routine use of quadripolar LV leads in our hospital. All CRT devices were implanted according to guidelines published by the European Society of Cardiology.

Results: Whilst there was a trend in patients implanted with an active fixation lead towards older age, longer QRS duration and greater ejection fraction, the two groups were well matched with respect to sex, heart failure aetiology and their underlying rhythm. Patients implanted with an Attain Stability lead (n=135) had a reduced incidence of lead displacement at 6 months (0.74% vs 5.52%; p=0.01) compared to those implanted with conventional passive fixation quadripolar leads (n=888; Figure 1). There was no significant difference in the rate of right atrial (RA) and right
ventricular (RV) lead displacement between the two groups (RA: 1.48% vs 1.80%, p=1.00; RV 2.22% vs 1.58%, p=0.48). Despite reprogramming, the rate of surgical re-intervention within 6 months was also lower with the Attain Stability lead (0.74% vs 4.73%; p=0.03; [Figure 1]). Furthermore, the radiation dose used to insert an active fixation LV lead was significantly lower compared to that for conventional passive fixation leads (538 vs 665 cGy.cm2; p=0.02).

Conclusion: The Medtronic Attain Stability Quad 4798 lead deploys an active-fixation mechanism which is associated with a lower incidence of lead displacement and re-intervention compared to conventional quadripolar leads. 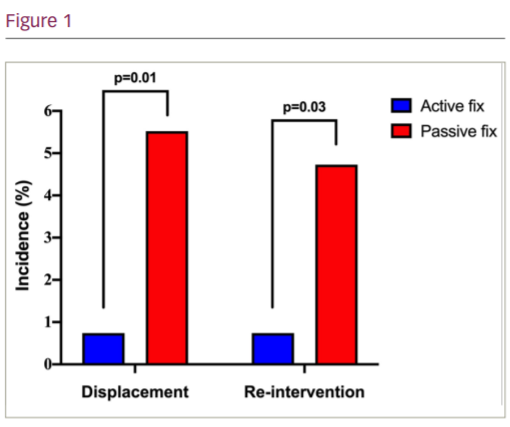