Primary prevention implantable cardioverter defibrillators (ICD) including those combined with cardiac resynchronisation therapy (CRT-D) are implanted primarily on the premise that reduced left ventricular ejection fraction (EF) has a higher risk of ventricular arrhythmias (VA). However, emerging data suggest that EF alone may no longer be sufficient to predict VA risk and with advances in heart failure therapies and access to specialist services, there has been a decline in the incidence of mortality in patients eligible for primary prevention devices. Multiple studies have assessed predictive risk factors but have pre-dated advances in medical and device therapies for heart failure. We assessed the incidence of VA and all-cause mortality in our locally implanted ICD/CRT-D cohort and assessed association with previously described risk factors.

Methods: This was an observational study of consecutive patients with EF <35% who underwent implantation of a new primary prevention ICD/CRTD between 2014 and 2019. Baseline characteristics, clinical outcomes and previously published predictive risk factors were obtained. Primary outcome was incidence of first VA, defined as any treated VA, any sustained, monitored only VAs or ventricular fibrillation. Secondary outcome was all-cause mortality. Kaplan–Meier survival curves were generated and univariate Cox proportional analysis assessed association between risk factors and outcomes.

Discussion: An annual VA event rate of ~3–7% and an all-cause mortality event rate of ~5–8% is in keeping with more recent published data. Direct comparison with some published trials is challenging due to their utilisation of an EF cut-off of 40% for ICD implantation with varying event definitions. Male gender and previous myocardial infarction were associated with VA, but aetiology was not. We could not explain the discrepancy between the positive correlation with VA for myocardial infarction but not for ischaemic aetiology. Scar burden may have an impact and we are currently collecting medication data to ascertain whether this plays a role. All-cause mortality association with age, diabetes and ischaemic cardiac disease have been previously described. Our data display similar event incidence to recently published data by Zabel et al. and van der Lingen et al. VA incidence has little association with previously published risk factors. In this new era of medical therapy, it is possible that reassessment of previous risk factors is required. 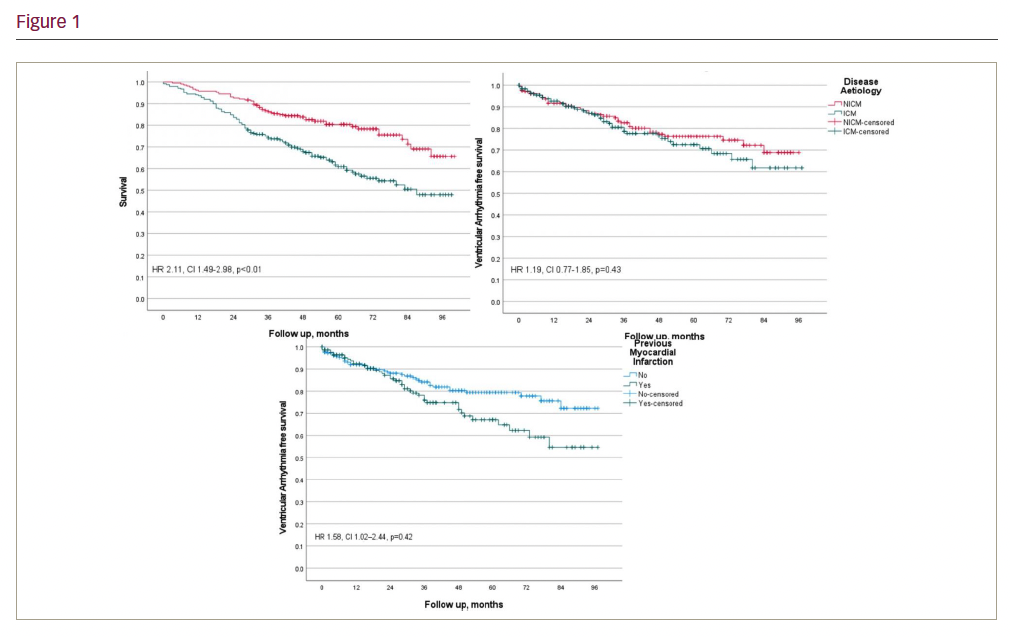